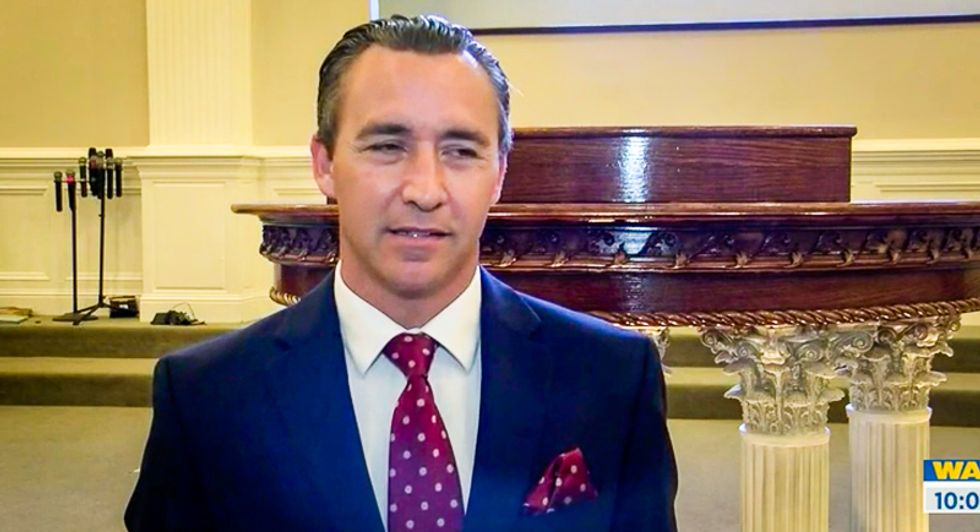 A Facebook live stream of Life Tabernacle Church Sunday showed Pastor Tony Spell with more than 100 church attendees during his service, despite the fact that he was supposed to be under house arrest after being arrested for aggravated assault. Spell turned himself into the Central Police Department, CBS reported.

Last week, Spell was charged after he decided to hold a mass gathering despite public health orders. He then drove a church bus in reverse toward a sign-holding protester. He's already facing misdemeanor charges for having in-person church services during the ban.

"I've just got to get to Jesus. ... Come on, America, let's get back to Jesus," he told the attendees. Nearly all of those at church Sunday were not wearing masks and ignoring social distancing rules.

"Trey Bennett has kept up a one-man demonstration in front of the church since Easter Sunday when he noticed hundreds of parishioners still attending services in defiance of the state's stay-at-home mandate, which bans gatherings of more than ten people. Houses of worship across Louisiana have turned to online services instead," said CBS.

The judge in Spell's case asked during the court appearance if Spell was following the state orders to limit crowds of people. Spell replied by quoting the Bible, reported WAFB-TV. When asked a second time about it, he refused to answer. The judge assumed that meant Spell wouldn't comply with the order to keep things locked down.

At least one member of Spell's church has died of COVID-19.

Read the full report at CBS.