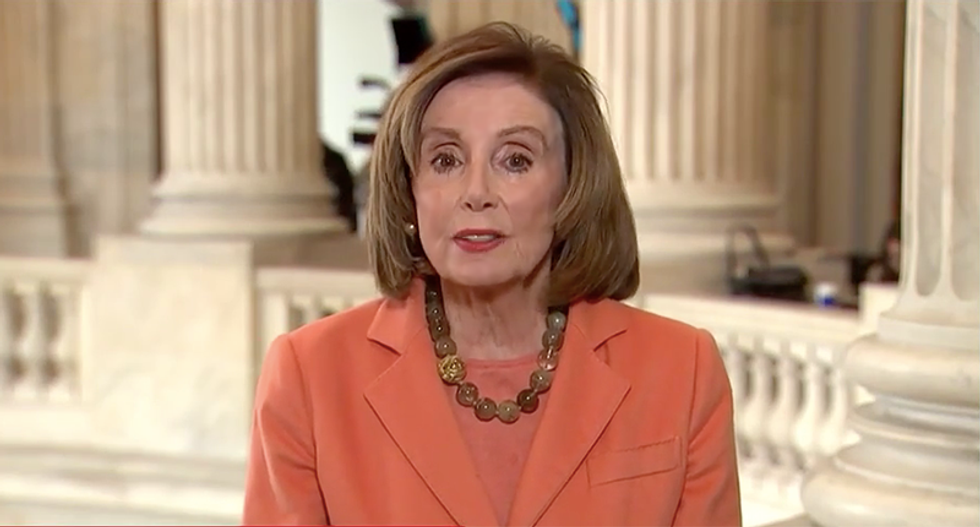 House Speaker Nancy Pelosi is trying to fast-track the next round of coronavirus relief, but the Republicans are dragging their feet and blocking any progress.

Speaking to Andrea Mitchell on MSNBC Thursday, Pelosi explained "the American people are very concerned about three things right now, at least three things right now: One, how are we protecting our first responders, our health care providers who are risking their lives to save other people's lives? They need their personal protective equipment. They need ventilators to help save lives. So, we're calling upon the president to do the Defense Production Act full throttle so that these needs are being met. None of us are worthy to pay respect to these workers unless we're doing everything in our power to protect them."

Third is the recovery.

She noted that the "Republican Tax Scam" bill from 2018 killed the mandate to get or give health insurance. That means that a number of companies refused to give health insurance and some people stopped getting policies. Now that the coronavirus is sending hundreds of thousands of people to the hospital, having affordable care couldn't be more important.

Meanwhile, the recent jobless numbers show an astounding 6.6 million people applied for unemployment, kicking many off of their workplace-funded health insurance.

"We should have an open enrollment to give people another chance to sign up in light of the coronavirus crisis that we have," Pelosi said. "But it's no surprise because this is a president who is in court right now to overturn the Affordable Care Act. Right now. He should withdraw that case that his support for that case because that will take away any pre-existing condition benefit. It will take away the -- all of the issues that relate to the cost as well as the access and affordability and accessibility to health care."

When Mitchell asked about Senate Leader Mitch McConnell (R-KY) blaming impeachment on the coronavirus crisis, Pelosi called into question the Republicans' ability to do their jobs.

"That's sad. They can't handle their jobs, I guess, because -- what are they saying? We ignored it? It was self-evident. Most people knew about it and certainly those of responsibility," Pelosi said. "So I say of that, either you can't handle your job, but don't blame impeachment on that. Just blame it on the fact that you didn't want to face the reality. That denial and that delay cost lives."

She also noted that Democratic and Republican governors and mayors believe that they need more help than is allocated in the CARE Act.

"They are bearing a tremendous burden here, and they have their other responsibilities that did not go away," Pelosi explained. "So I'm in conversation with them as to the extent of the need. Let's take inventory. What do we need? And let's get that. And then in addition to that, more money, funding for hospitals which cannot take in other kinds of cases which usually funds their operations. Now they need it not only for the coronavirus, COVID-19 patients, but also just to sustain their operations in general. The list goes on."

She went on to say, "I don't know how much more the leader needs to know about the challenge that is facing our country and that further delay just exacerbates the problem." She said that the Democrats are continuing to work behind the scenes on the next bill.

Trump has accused Democrats of "tearing the country apart" with their political statements. It was mere days later McConnell attacked Democrats, saying they caused the coronavirus crisis with the impeachment.