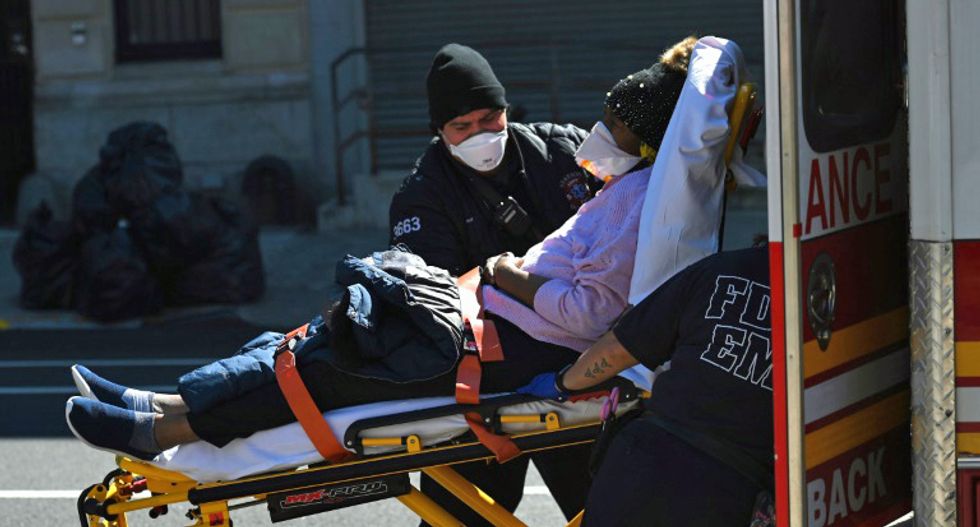 Paramedics maneuver a stretcher with a patient at Brooklyn Hospital Center in New York City, the US epicenter of the coronavirus crisis. AFP / Angela Weiss.

Cuomo said 799 people died in the last 24 hours, outdoing the previous high of 779 announced on Wednesday, but added that the curve was flattening because of social confinement measures.

"We had a 200-net increase in hospitalizations, which you can see is the lowest number we've had since this nightmare started," Cuomo told reporters, adding that intensive care admissions were also at the lowest yet.

COVID-19 has killed more than 14,800 people in the United States, and the number of confirmed cases has grown to more than 432,000, according to a running tally by Johns Hopkins University.

New York is bearing the brunt of the United States' deadly coronavirus pandemic, accounting for around half the number of deaths across the country.

On Monday, Cuomo extended the state-wide shutdown of schools and non-essential businesses until April 29 to help stop the rate of infections increasing again.

"We are flattening the curve by what we are doing," he said Thursday, adding, "We have to keep the curve flat."

He warned that there could be a second wave of infections and said it was too early to say when the city might be reopened again.

"I'm not going to say to anyone 'this is where I think we'll be in three weeks or four weeks or five weeks.' I have no idea," Cuomo admitted.