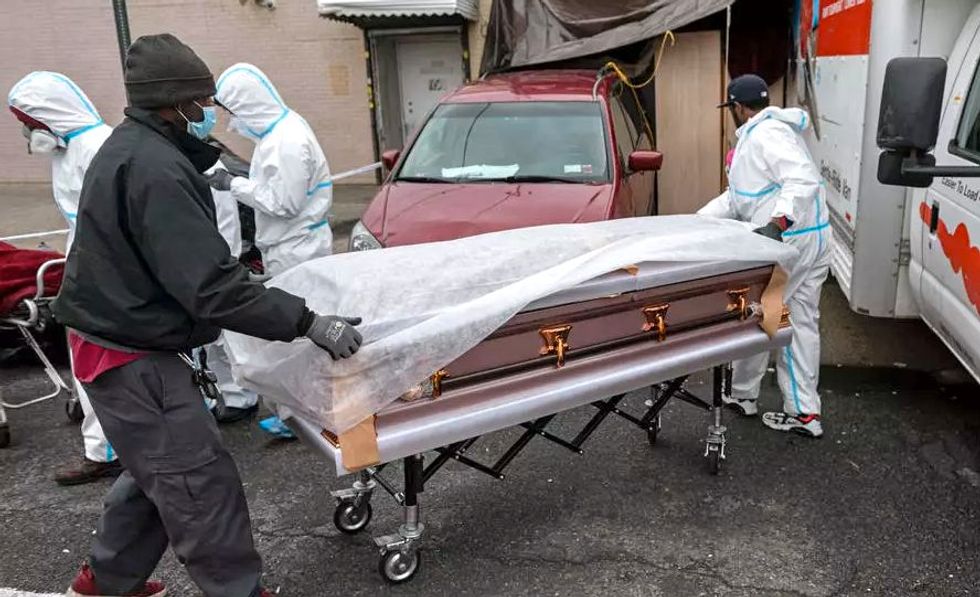 People wearing hazmat suits and masks transport a casket into a funeral home in Brooklyn on April 30, 2020 where dozens of decomposing bodies were found in trucks Johannes EISELE AFP

New York officials launched an investigation Thursday after police found dozens of decomposing bodies in trucks outside a funeral parlor overwhelmed by the coronavirus outbreak.

Officers made the grisly discovery on Wednesday after residents complained that an awful smell was coming from two vehicles parked outside the Andrew T. Cleckley Funeral Home in Brooklyn.

"We are investigating," Howard Zucker, the state health commissioner, told reporters, adding that his department had not received complaints about the business in the past.

Mayor Bill de Blasio described the treatment of the dead as "absolutely unacceptable."

"(Funeral homes) have an obligation to the people they serve to treat them with dignity," he said.

Owner Andrew Cleckley told The New York Times that, like other funeral directors across the city, he had been overwhelmed by a deluge of bodies during the COVID-19 outbreak.

He said he had used the trucks for overflow space after his parlor had been filled with more than 100 bodies.

"I ran out of space. Bodies are coming out of our ears," the paper quoted him as saying.

US media quoted sources as saying as many as 60 bodies were found inside the vehicles, which were a rental van and what looked like a tractor-trailer.

The virus has killed almost 18,000 people in New York City in less than two months, in America's worst outbreak of the virus.

Morgues, cemeteries and crematoriums across New York City have reported struggling to keep up with the high numbers of dead.

Refrigerated trucks to store bodies have become a common sight outside the most strained hospitals.