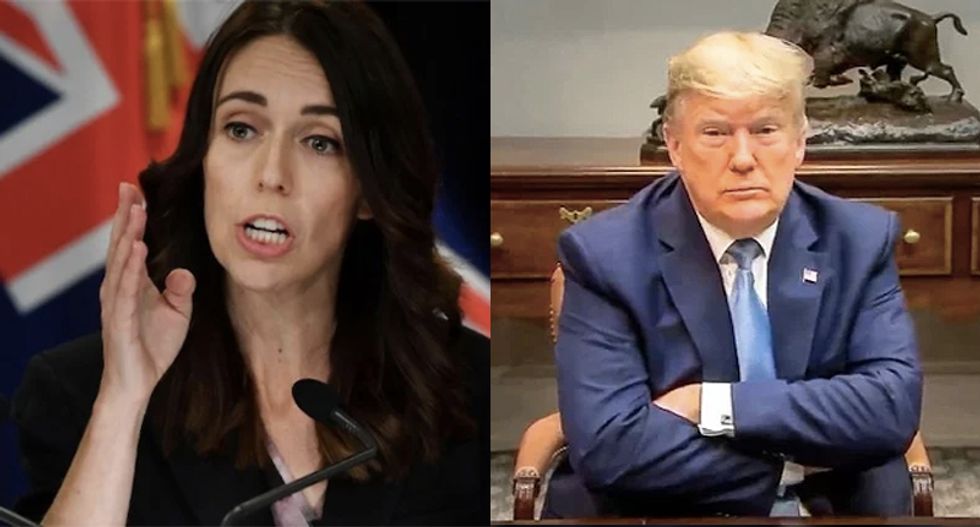 Columnist Charlie Pierce wrote in his Esquire column Tuesday that one refreshing way to make it through the failures of President Donald Trump during the coronavirus crisis is to look at the competent leadership of other heads of state. Namely, New Zealand's prime minister.

"Two days later, [Prime Minister Jacinda] Ardern delivered a televised address from her office — the first time since 1982 that an Oval Office-style speech had been given — announcing a coronavirus response alert plan involving four stages, with a full lockdown being Level 4. A group of influential leaders got on the phone with her the following day to urge moving to Level 4," Pierce cited from a Washington Post report.

March 23, Arden gave the country 48 hours to lock down everything.

Before midnight all phones got an alert saying that people should act as if they have COVID-19 because it would save lives. “Let’s all do our bit to unite against Covid-19," it implored.

"All it takes is a leader with credibility who tells the truth. New Zealand has one of those. We do not," wrote Pierce.

In New Zealand there is simple and easily understood language: Stay home. Trump has fumbled through downplaying the virus to constant claims that all is well. He wants to stay optimistic, he's claimed, and deliver only positive news. While Americans need something hopeful and positive, the more important thing is information that could help save lives.

Arden typically addresses the nation from the podium of a news conference, Pierce explained, but "she also regularly gives updates and answers questions on Facebook, including one done while sitting at home — possibly on her bed — in a sweatshirt."

She doesn't complain about the media or go off on a paranoid rant about people being after her.

"No paranoid rambling about career civil servants who tell the country the truth," Pierce said. "No blame-shifting, responsibility-ducking, or daily cheapjack self-aggrandizement."

He noted that the Post wrote that Arden continues to win hearts with advisories about the Easter Bunny and Tooth Fairy being essential workers.

“But as you can imagine, at this time they’re going to be potentially quite busy at home with their family as well and their own bunnies," she said.

Pierce called this an excellent example of "democracy in action." Meanwhile, the American president is lashing out at even the simplest of questions like, "what would you say to Americans who are scared?"

"I would say you're a terrible reporter," Trump replied.