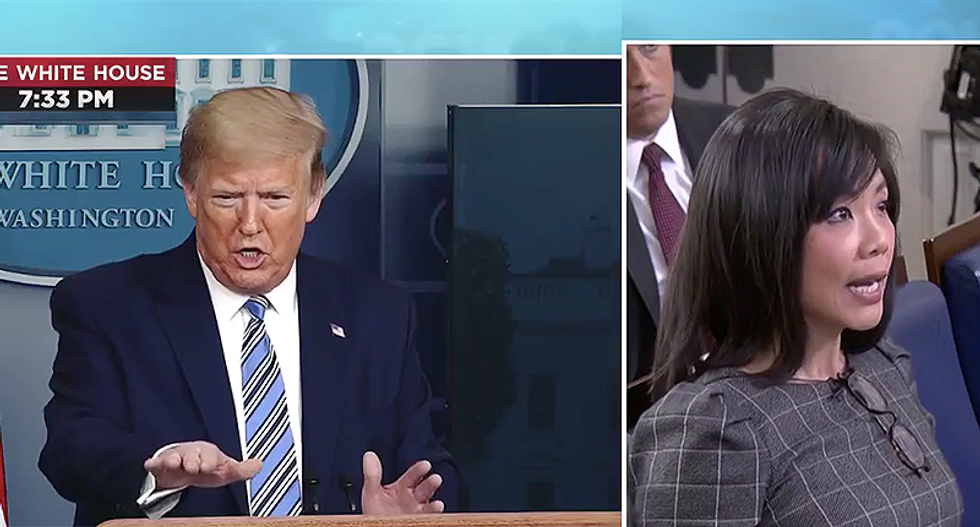 President Donald Trump appeared to play it cool at first when he was pressed by CBS News reporter Weijia Jiang on Sunday, asking about the slow response to the coronavirus crisis.

"If you look at what I did banning China from coming in," Trump began.

"Not American nationals," she cut in, to mention the 40,000 people who were allowed back into the U.S. from China.

"Nice and easy. Nice and easy. Relax. We cut it off. Everybody was amazed that I did it. We had 21 people in a room. Everybody was against it but me. Dr. Fauci said had I not done that, perhaps tens of thousands and maybe much more than that people would have died. I was very early, very, very early. And we just saw, you saw Bret Baier making a statement. They had a debate well into February and not even mention -- it wasn't mentioned, the Democrats, we were very early. I'm the president, and you know what I just did?"

He then asked her how many people had died by the time Trump had intervened. In fact, no one knows how many people with COVID-19 died or were even infected because there was no testing.

"So do you acknowledge --" she began again before he snapped at her again.

"Keep your voice down!" Trump shouted.