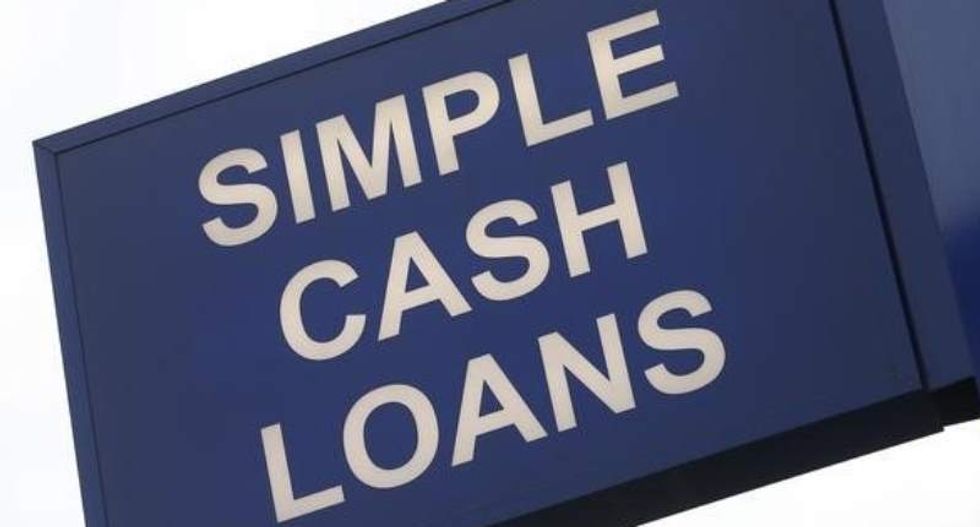 A sign for a payday lending shop is seen in London on March 6, 2013. (Reuters/Suzanne Plunkett)

"Payday lenders exploit millions of working families through predatory practices. Congress shouldn't prop them up during this crisis."

A bipartisan group of House lawmakers is pressing the Trump administration to make coronavirus relief loans meant for small businesses available to payday lenders, the financial institutions notorious for preying on desperate borrowers with deceptive advertising and exorbitant interest rates.

"The companies now asking for government help are the same ones that ruthlessly pursue borrowers when they can't pay their debts."

Politico reported that while "payday lenders weren't explicitly mentioned" in the letter, "a spokesperson for Rep. Blaine Luetkemeyer (R-Mo.), one of the lawmakers who led the letter, confirmed the intent was to include them in the request."

"These businesses have been shut out completely from the PPP, which has forced many of them to lay off their highly trained employees who would have preferred to keep their jobs than seek government unemployment assistance," the lawmakers wrote.

"This is fucking outrageous," Maurice BP-Weeks, co-director of the Action Center on Race and the Economy, tweeted of the letter.

Amanda Fischer, policy director at the Washington Center for Equitable Growth, told Politico that providing small business loans to payday lenders would "supercharge inequality for the low-wage workers suffering the most from this recession."

"The companies now asking for government help are the same ones that ruthlessly pursue borrowers when they can't pay their debts," said Fischer. "Families need better unemployment insurance, additional direct payments, and forbearance on mortgage and rent—not taxpayer-financed predatory loans."

In a tweet last Friday, Fischer suggested sarcastically, "How about we give payday lenders small business loans, but we charge 480% in interest and can garnish their profits for repayment?"

The lawmakers' push to make payday lenders eligible for PPP loans came as millions of small businesses are struggling to apply for and obtain funds from the program.

On Friday, President Donald Trump signed into law a relief package that included $310 billion in additional funding for the PPP, which quickly ran out of money after millions of companies—including many large publicly traded firms—rushed to take part in the program.

"Payday lenders exploit millions of working families through predatory practices," said Gillibrand. "Congress shouldn't prop them up during this crisis."