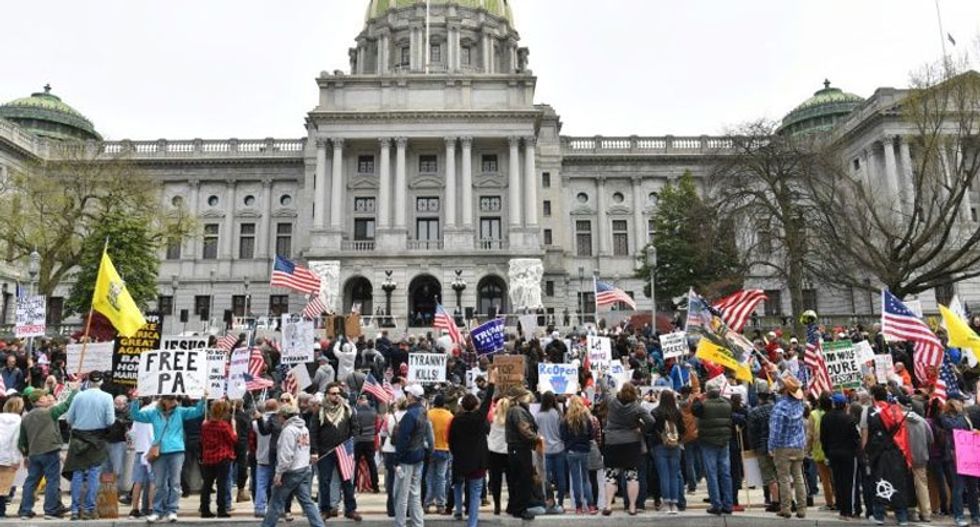 Hundreds of people including lawmakers gathered in the US state of Pennsylvania Monday to protest measures that are urging most of the nation to stay home due to the coronavirus pandemic.

The "Patriots Rally" demonstration in state capital Harrisburg follows similar protests -- cheered on by President Donald Trump -- elsewhere in the United States, including in Michigan, California and Ohio.

Trucks painted with slogans including "work not welfare" and "shelter in place isn't freedom!" paraded throughout Harrisburg, as Republican representatives from Congress rallied protestors marching at the steps of the capitol building.

"Our new normal does not mean we will sacrifice our freedoms for the safety of our country," said state lawmaker Aaron Bernstine, in a speech punctuated by "USA" chants.

"Normal is not taking government handouts allowing us to pay our bills."

The US government recently began issuing one-time payments as high as $1,200 to many residents with additional supplements for children, as the fast-spreading coronavirus has left a staggering 22 million people in the US out of work.

Among Monday's protest organizers are a trio of conservative pro-gun activist brothers who have instigated anti-quarantine demonstrations throughout the country.

As he faces re-election later this year Trump has been anxious to reboot the nation's economy and send Americans back to work, while state governors voice frustration that there is not yet enough virus testing to safely re-open businesses.

Though the protests at US statehouses have drummed up much media attention and online activity, they remain fringe: more than 80 percent of Americans would approve of a national stay-at-home order, according to a recent Quinnipiac poll.

The poll indicates that nearly 70 percent of Republicans and 95 percent of Democrats would back such a measure.

Yet Monday's Harrisburg protest highlighted the exasperation of many Americans stuck at home.

"You can't shut everything down just because we have a health issue," he told AFP. "We have to figure out how to balance things."