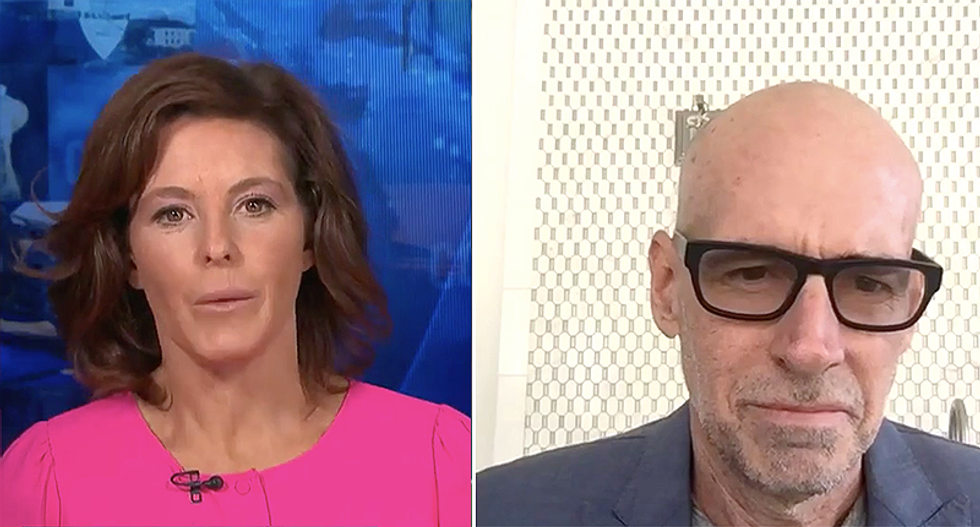 Podcaster and professor Scott Galloway went off during an appearance with MSNBC's Stephanie Ruhle on Tuesday.

He explained that we call workers like grocery store employees, Amazon warehouse workers and others "essential" employees, we don't actually treat them as all that essential.

"Well, then let's walk through this," said Ruhle. "Take Amazon. Take Walmart. Last year it was Bernie Sanders who went to the Walmart annual meeting arguing that someone from the labor force should have a seat on the board. He didn't get laughed out of the building but certainly didn't get any traction, and now here we are. Those are two of the only companies out there whose stock is up this year, and to people who don't benefit are those people in the stores stocking the shelves."

Galloway explained that in an economy there are three groups who get a piece of the pie: shareholders, workers and consumers. In the United States, we've decided that consumers and shareholders are the more important groups. As the GDP has grown, wages haven't. As stock prices go up, wages continue to mostly stay flat.

"In Germany, it's mandated at least 40 percent of the board has to consist of workers," Galloway said. "So, effectively workers have almost no say at the table, and as a result, they have -- their compensation just doesn't reflect the term essential. also, I'd argue, we're going to face some ugly truths here. Every night at 7:00 we're leaning outside our balconies and applauding and honoring our health care workers, and we should because they're saving lives. But we don't go outside our windows and honor the people working in grocery stores or the transit workers, 41 of whom have died in New York state, making sure we have basic infrastructure."

He went on to say if this is merely a continued war on the poor because healthcare workers are educated where the others are not.

"We think of them in a different light as those who haven't had as much opportunity as us, haven't been as blessed but are just as important," he explained. "Show me someone at home who is basking in purell. I'll show you someone who isn't essential. Show me someone essential outside of health care and I'll show you someone who has no dignity in work, no health care protection and is forced to go work and put themselves in the way of danger because, quite frankly, they haven't made any money the last 40 years."

Last week it was revealed that many private equity investors are forcing additional costs onto patients, known as "surprise billing." Ruhle explained that those private equity giants always take big risks and get huge profits. Now, however, they're hitting a downside to business but the government is stepping in.

Galloway agreed, calling it "rugged individualism" and the "Hunger Games" on the way up and a kind of "Hallmark channel-like socialism" on the way down. He said that people need to decide if we're capitalist or not. Businesses benefit during the upswing but when things turn bad, like the 2007-2008 financial crisis, that they are allowed to fail as a result of their risks.

"But if we're going to be socialists, and a lot of people say that's a better alternative. Five of the 7 happiest nations have socialism. You want your universal Pre-K and universal health but let's not have capitalism on the way up and then when we hit a crisis we have the worst type of socialism, we have cronyism," Galloway continued. "And that's the people with the most representative of Washington, the most economic power, decide all of a sudden that we're in this together. And as soon as the markets start going back up then everybody talks about capitalism and individualism."

He then unleashed on the companies seeing huge stock increases during the coronavirus crisis, noting that they have the biggest lobbyists in Washington.

Watch his explainer below: