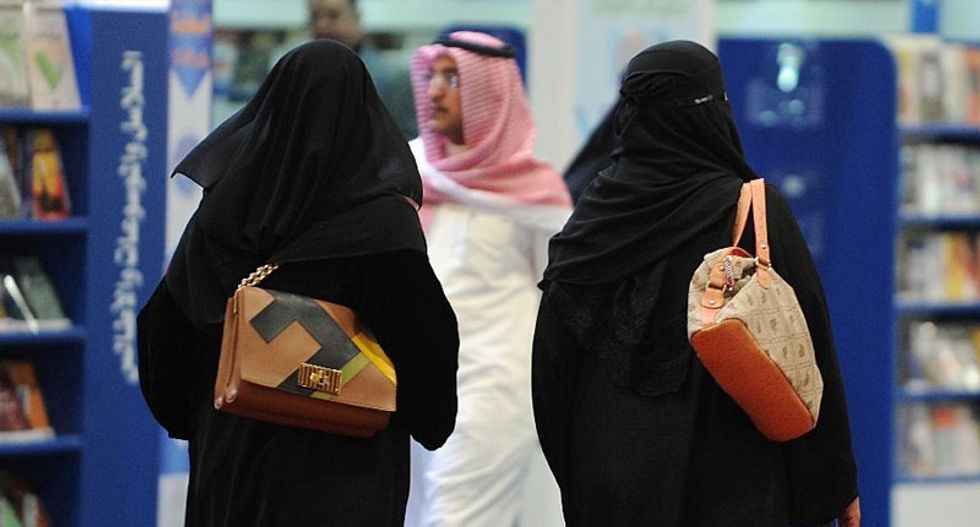 Under Saudi Arabia's guardianship system a male family member must grant permission for a woman's study, travel and other activities (AFP Photo/Fayez Nureldine)

Saudi Arabia has abolished flogging as a punishment, the state human rights commission said Saturday, hailing a "major step forward" in the reform program launched by the king and his powerful son.

But they say the headline legal reforms overseen by Crown Prince Mohammed bin Salman have brought no let-up in the conservative Islamic kingdom's crushing of dissent, including through the use of the death penalty.

The state human rights commission said that the latest reform, which was reported by Saudi media including the pro-government Okaz newspaper, would ensure that no more convicts were sentenced to flogging.

"This decision guarantees that convicts who would previously have been sentenced to the lash will from now on receive fines or prison terms instead," its chairman, Awad al-Awad, said.

Previously, the courts had powers to order the flogging of convicts found guilty of offences ranging from extramarital sex and breach of the peace to murder.

In future, judges will have to choose between fines and/or jail sentences, or non-custodial alternatives like community service.

The most high-profile instance of flogging in recent years was the case of Saudi blogger Raif Badawi who was sentenced to 10 years in prison and 1,000 lashes in 2014 on charges of "insulting" Islam.

He was awarded the European parliament's Sakharov human rights prize the following year.

The abolition of corporal punishment in Saudi Arabia comes just days after the kingdom's human rights record was again in the spotlight following news of the death from a stroke in custody of leading activist Abullah al-Hamid, 69.

Hamid was a founding member of the Saudi Civil and Political Rights Association (ACPRA) and was sentenced to 11 years in jail in March 2013, campaigners said.

He was convicted on multiple charges, including "breaking allegiance" to the Saudi ruler, "inciting disorder" and seeking to disrupt state security, Amnesty International said.

Criticism of Saudi Arabia's human rights record has grown since King Salman named his son Prince Mohammed crown prince and heir to the throne in June 2017.

The king has launched ambitious economic and social reforms, allowing women to drive and for sports and entertainment events to be staged in the kingdom.

However, the brutal murder of journalist Jamal Khashoggi inside the Saudi consulate in Istanbul in October 2018 and the increased repression of dissidents at home have overshadowed the prince's pledge to modernise the economy and society.

The Saudi authorities put a record 184 people to death last year, according to figures released by Amnesty International on Tuesday.

"Saudi Arabia's growing use of the death penalty, including as a weapon against political dissidents, is an alarming development," the human rights group said.

The Premier League must decide if the new owners meet the criteria in its owners and directors test.

Amnesty International warned that unless the league provides thorough justification for its decision to approve the takeover, it risks damaging its own reputation.

Critics have accused Saudi Arabia of "sports washing", saying the government uses sport as a way of distracting attention from its human rights record.