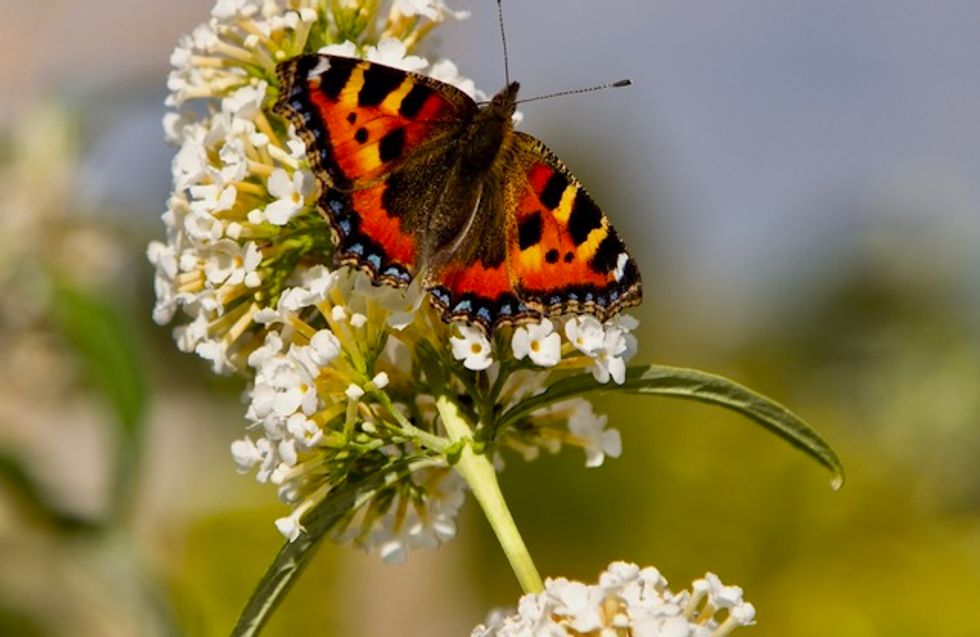 "We keep getting clear signs that the way we live and the actions we take are having severe consequences."

he largest ever assessment of long-term insect abundance found that there has been a nearly 25% decrease of land-dwelling bugs like ants, butterflies, and grasshoppers over the past 30 years—a revelation that inspired fresh demands for urgent international action to tackle the decades-long, human-caused "bugpocalypse."

"Insect populations are like logs of wood that are pushed under water. They want to come up, while we keep pushing them further down. But we can reduce the pressure so they can rise again."

The Guardian reported on the new assessment, published in the journal Science:

The analysis combined 166 long-term surveys from almost 1,700 sites and found that some species were bucking the overall downward trend. In particular, freshwater insects have been increasing by 11% each decade following action to clean up polluted rivers and lakes. However, this group represent only about 10% of insect species and do not pollinate crops.

Researchers said insects remained critically understudied in many regions, with little or no data from South America, south Asia, and Africa. Rapid destruction of wild habitats in these places for farming and urbanization is likely to be significantly reducing insect populations, they said.

The researchers found an average annual decrease among terrestrial insects of 0.92%, "which may not sound like much, but in fact it means 24% fewer insects in 30 years' time and 50% fewer over 75 years," lead author Roel van Klink of the German Center for Integrative Biodiversity Research (iDiv) and Leipzig University said in a statement.

"Insect declines happen in a quiet way and we don't take notice from one year to the next," he explained. "It's like going back to the place where you grew up. It's only because you haven't been there for years that you suddenly realize how much has changed, and all too often not for the better."

The researchers found insect declines—generally caused by habitat loss, light pollution, and pesticides—were strongest in the U.S. West and Midwest and in Europe, particularly Germany. "Europe seems to be getting worse now—that is striking and shocking," van Klink told the Guardian. "But why that is, we don't know."

Data is less available for some regions, "but we know from our results that the expansion of cities is bad for insects because every place used to be more natural habitat—it is not rocket science," he added. "This is happening in East Asia and Africa at a rapid rate. In South America, there is the destruction of the Amazon. There's absolutely no question this is bad for insects and all the other animals there. But we just don't have the data."

Van Klink also pointed out that bugs in protected spaces like nature preserves are doing only slightly better, and "we found that very striking and a bit shocking—it means something's going wrong there."

We keep getting clear signs that the way we live and the actions we take are having severe consequences. We can… https://t.co/Rn4Pr54CuS
— Local Greens (@Local Greens)1587717016.0

The new study follows a major February 2019 assessment that, as Common Dreams reported, led one expert to warn that "if insect species losses cannot be halted, this will have catastrophic consequences for both the planet's ecosystems and for the survival of mankind." The past year has seen more research about declines in insects and other species, and more warnings from scientists about biodiversity and mass extinction.

British biologist and author Dave Goulson of the University of Sussex helped develop that roadmap. In response to the new analysis, with which he was not involved, Goulson told the Guardian: "People should be as concerned as ever about insects. It is great news that some aquatic insects seem to be increasing, probably from a very low level. But the bulk of insects are terrestrial and this new study confirms what was already clear: they have been declining for many decades."

Reporting on the new assessment sparked impassioned calls for action:

The evidence for widespread decline in insect populations gets stronger. Evidence for causes and solutions on agric… https://t.co/0YUGM6CLzp
— Farm Wildlife (@Farm Wildlife)1587717775.0

"We depend on the services of insect pollinators and predators to grow food, so it is essential that we create space for them to thrive and that we make the countryside safer for them," CEO of the British conservation charity Buglife Matt Shardlow said in a statement. "It is also clear that strong regulatory legislation can reduce pollution levels and reverse biodiversity decline, we need similarly strong legislation to improve the management of terrestrial wildlife habitats and to reduce light pollution."

Despite their bleak findings, researchers behind the analysis expressed optimism about the recovery of freshwater insects. Jonathan Chase of iDiv and Martin Luther University-Halle Wittenberg said in a statement that the freshwater insect recovery numbers "show that we can reverse these negative trends."

"Over the past 50 years, several measures have been taken to clean up our polluted rivers and lakes in many places across the world," Chase added. "This may have allowed the recovery of many freshwater insect populations. It makes us hopeful that we can reverse the trend for populations that are currently declining."

As van Klink put it: "Insect populations are like logs of wood that are pushed under water. They want to come up, while we keep pushing them further down. But we can reduce the pressure so they can rise again. The freshwater insects have shown us this is possible. It's just not always easy to identify the causes of declines, and thus the most effective measures to reverse them. And these may also differ between locations."

An Alabama attorney who now represents the family of Kevin Greeson, one of the rioters killed at the Capitol on Jan. 6, was appointed to a prominent agricultural board by former President Trump two days before he left office. The lawyer is also close friends with Rep. Mo Brooks, an Alabama Republican whose role in the events surrounding the riots has come under increasing scrutiny, and who personally announced the last-minute appointment.

Mark McDaniel, a politically connected trial lawyer from Huntsville, exceeded the legal limit in campaign contributions to Brooks in this election cycle, according to a notice the Federal Election Commission sent the campaign on Monday. McDaniel's financial support for Brooks' federal efforts traces back to 2009. In December, he publicly defended Brooks' right to challenge the election results.