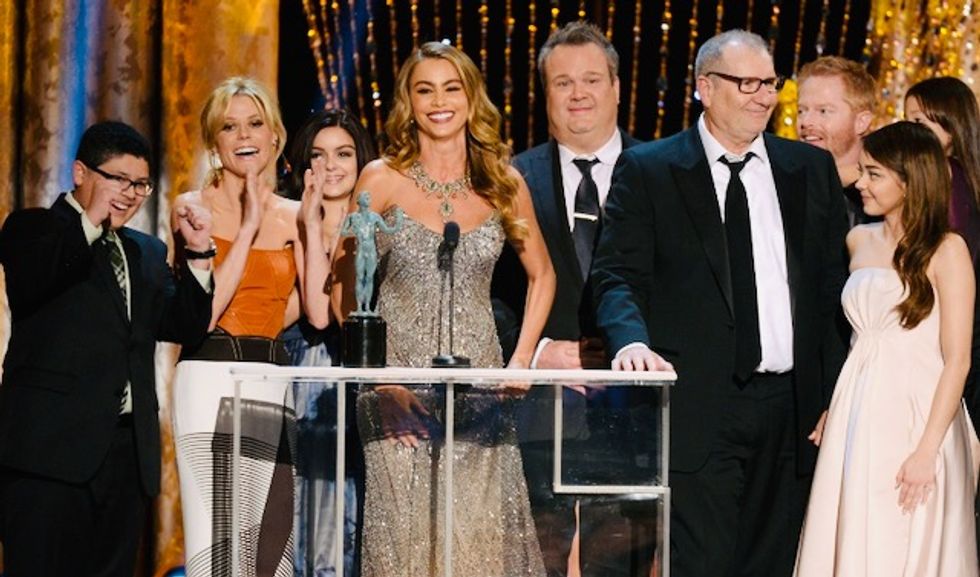 The end of "Modern Family" after nearly 11 years may be yet another herald of the American sitcom's end -- but the series can go out counting itself among the icons of the genre.

Wednesday's two-hour finale on US network ABC began with a documentary and concluded with a two-part episode.

The half-hour "mockumentary" followed multiple branches of the goofy but loving Pritchett clan for 248 episodes over 11 seasons.

This season's nearly four million viewers per episode are still a far cry from the show's peak popularity in 2013 and 2014, when it would garner at least 14 million watches a week -- and when video streaming had not yet reached its prime.

"Modern Family"'s debut made a big splash among audiences and critics alike, winning a Golden Globe for best comedy series in 2012.

It combined fake on-set interviews -- like "The Office" -- with an upbeat tone.

The episodes' signature structure often saw detached plot lines pay off with a central joke in the final act.

"We debuted in 2009, when comedy was tilting heavily toward the cynical," the show's co-creator Christopher Lloyd wrote on The Hollywood Reporter site.

"And much of it was terribly funny. But there did seem to be an opening for comedy that had heart."

The formula worked, proving there was still demand for a straightforward style that many had already said was on its way out.

But the recipe was anything but stale.

The series was credited for helping to normalize gay characters by including two men who adopted a baby girl -- a much more unexpected sight on TV a decade ago than in 2020.

And Sofia Vergara's quasi-matriarch Gloria was one of the only major Hispanic characters on television at the time, though some accused the portrayal of playing into negative stereotypes of a Colombian woman.

While some film and TV projects have been delayed due to the spread of the coronavirus, the production for "Modern Family" was finished before lockdowns began.

And now Luke Dunphy actor Nolan Gould hopes the ending can be a bright spot.

"I'm glad that in the midst of all that's going on in the world, there's going to be a finale for Modern Family," he told the site Hollywood Life.

More than a year and a half into President Joe Biden's first term, Louis DeJoy—a megadonor to former President Donald Trump and a villain in the eyes of progressives and many Democratic lawmakers—is still running the U.S. Postal Service.

DeJoy's staying power in the face of widespread outrage over his sabotage of postal operations and his ethics scandals, one of which spurred an FBI probe, can largely be attributed to the loyalty of the USPS Board of Governors, a majority of which has remained supportive of the postmaster general amid repeated calls for his ouster over the past two years.

Republican Florida Gov. Ron DeSantis and his Stop WOKE Act suffered a two-punch blow Thursday as a federal judge blocked parts of the controversial law and a coalition of civil liberties groups filed a lawsuit against what they are calling "racially motivated censorship."

"Under our constitutional scheme, the remedy for repugnant speech is more speech, not enforced silence."

Trump Org could be ‘extinguished’ and he could lose liability protections for his properties: tax expert

Donald Trump may lose his Trump Organization empire following the disposition of a legal case in Manhattan.