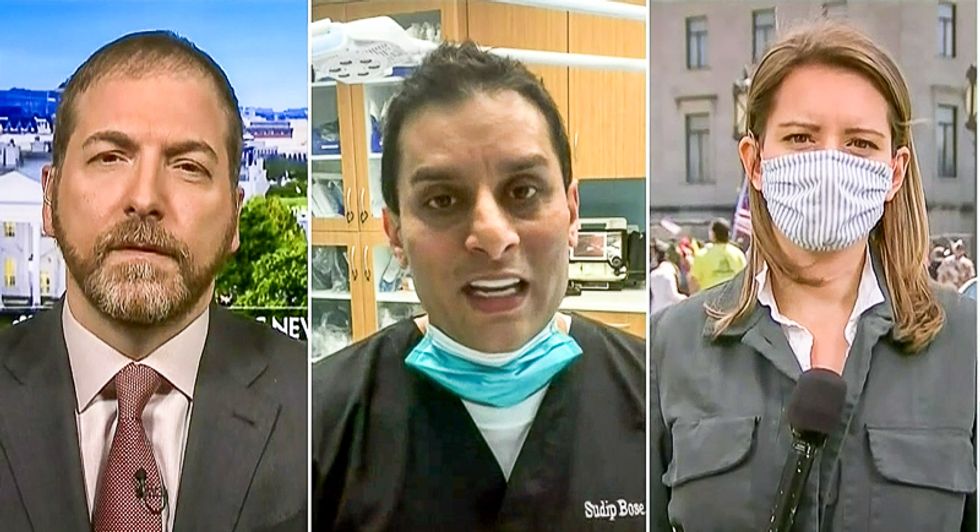 An emergency room doctor from Odessa, Texas told MSNBC on Tuesday that he believed the state's economy should open back up to allow the virus to "go through all of us."

"Is Odessa ready for more people in public and a spike that could come with it?" MSNBC host Chuck Todd asked Dr. Sudip Bose.

"It's tough decisions, like, which direction would you rather be wrong?" Bose replied. "For us, a tiered opening does make sense at this time and from the emergency room here, to be brutally honest, I think that this virus, in my opinion, is going to go through all of us throughout the United States."

The doctor predicted that vaccines would not be of much help against COVID-19.

"The flu vaccine was 50% effective and you really have to get things right," he explained. "If you don't bind that properly, actually antibodies bind to it and it increases advancement into the cell. So long story short, I don't think a vaccine is going to rescue us or a med, looking at the trials currently."

"And then it goes to their young parents," he added. "And what we did in Italy that wasn't good, was culturally those kids went to grandma and grandpa and they got sick. So, we've got to do this in a calculated manner."

"And I think it is time to open our economy now," Bose said.

Update: Bose clarified his remarks in a statement to Raw Story.

"Basically, the concept is this," the statement said. "Herd immunity will likely happen before a cure. Safest way to do this is possibly to open schools. Kids are nearly 100% protected (get minor illness in most cases). They give it to their younger parents (who are presumably healthy and most do ok). In Italy, the kids interacted with grandparents more due to culture - leading to increased deaths."