'The nerve to say this when they didn't even give Merrick Garland a hearing': Ex-deputy AG goes off on Trump 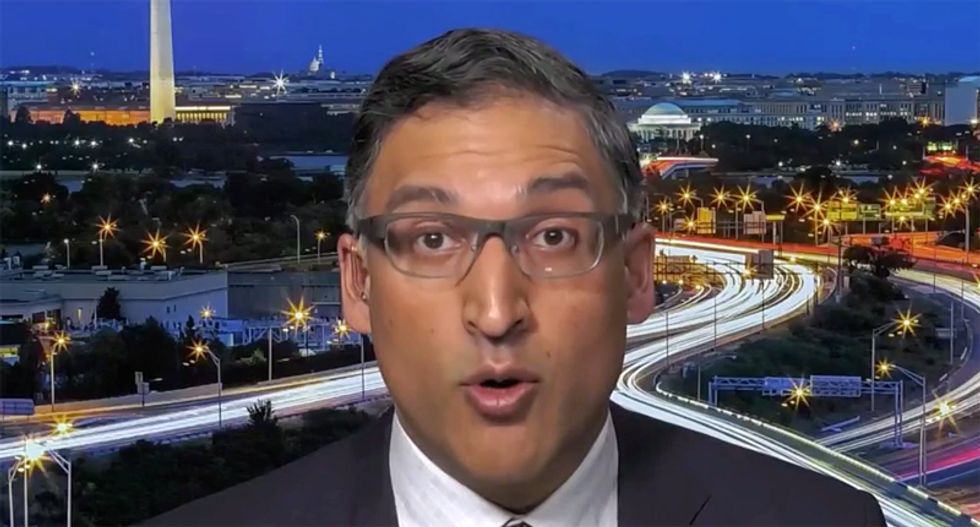 Former Deputy Attorney General and former Solicitor General Neal Katyal went off on President Donald Trump for having the temerity to claim that somehow he was being mistreated because Democrats weren't confirming his people.

Democrats, as many may recall, are not in charge of the U.S. Senate right now, it's Republicans who run the show. The problem Trump likely has, however, is that many of his appointees are so extreme that even moderate Republicans are unwilling to vote for them, particularly in an election year.

"The president is trying to assert the powers of Congress," Katyal began. "Congress sets the budget and the president can't just go and nix out items he doesn't agree with because he doesn't like an organization or foreign government like Ukraine or Puerto Rico, you don't get to nix out funding. That the not the way our system works. His claims here are very King George. Like what he said a couple of days ago, he said 'I can force the states to reopen.' All of this together is blatantly a destruction of what our Constitution is about."

Katyal recalled Trump's comments Wednesday saying that he could adjourn Congress and push his own appointments through.

"That has three very deep constitutional problems," he continued. "One is the Constitution doesn't let him, article two says he can only adjourn Congress if they disagree. There is no disagreement there. The House and Senate said they should adjourn on January 3rd. Second, even if he could get over that, it doesn't allow him to recess judges, which is what he was seeking to do in the press conference today because the Supreme Court, a few years ago in a decision, said you can't use the recess power essentially like an end runaround Senate confirmation, and that's of course what he's doing here."

Finally, Katyal explained that Trump is again trying to break Constitutional norms and if he's trying to do it he "better have a darn good reason." Crying because he can't get people confirmed isn't exactly that reason.

"Give me a break!" said Katyal. "He had 50 court of appeals judges confirmed in three years. Obama had 55 and in eight years. And the last two years of Obama, he only got two nominees confirmed. Two. Trump gets that on any given Tuesday and, you know, the most galling thing about this is that they have the nerve to say this when they didn't even get Merrick Garland a hearing. The president said, 'Oh, the Senate isn't doing its duty to confirm judges. The senate that's his own party? And that's why he wants to do this? I mean, boy, we never heard any of that before when he had the most dramatic things at stake. Sorry, that was a long answer but hopefully gives you something to work with."

Former Ebola Czar Ron Klain, then bashed Trump for the claim that somehow the World Health Organization is corrupt and hiding something for China.

"Has the WHO made mistakes handling the coronavirus? Yes," he conceded. "Should we look into improve the WHO's performance, of course. Five years ago I wrote an article calling for WHO reform. If the WHO was the only problem that existed here than every other country would have the same coronavirus problem we have. They don't. Why? Their leaders have taken the steps they need to take to get testing in place, to get the treatments in place, to get the medical facilities built up, to get the equipment to the doctors and nurses."

He explained it can't be the WHO's fault because the problem seems to be only isolated to the United States where President Donald Trump is in charge. Other countries have managed to stop their spike in cases while the U.S. has not.