The 'Spanish' flu outbreak of 1918 is playing out just like 'reopen' protesters are in 2020: report 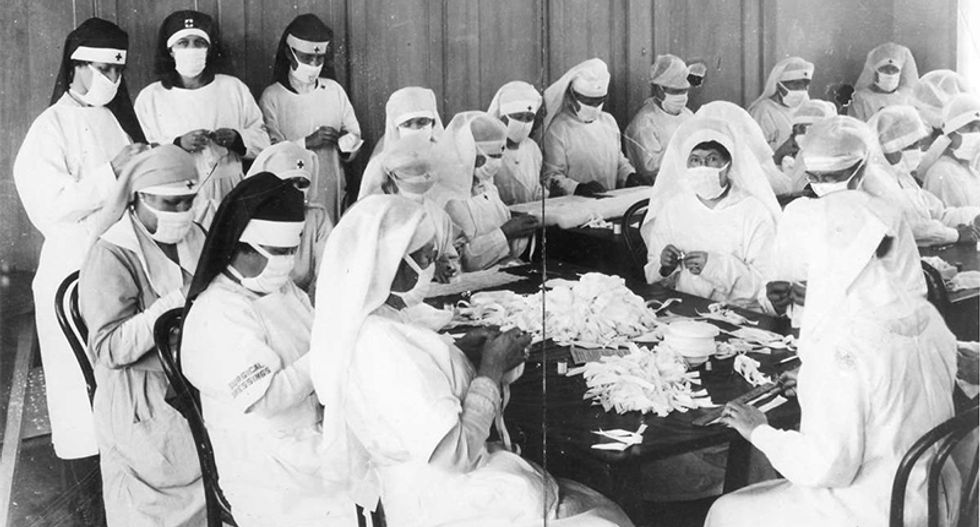 1918: Volunteers in Oakland sew masks to prevent the spread of the flu, during the deadly Spanish influenza of 1918 and 1919.Photo: Oakland Public Library 1918

It began in San Francisco in Sept. 1918, he explained, and people were successfully wearing masks and cases were dropping. By November, public health officials said the city could reopen.

"Residents rushed to entertainment venues after having been denied this communal joy for months. The mayor himself was fined by his own police chief after going to a show without a mask," said Mak.

Another wave of the virus came in Dec. 1918 and the health officials told people to start wearing masks again, but people refused. Businesses were worried about their Christmas sales, so they opposed the efforts, as did the Culinary Workers Union. Residents were over it, and they'd already been dealing with it for months. Police began fining or arresting people for not wearing masks, which sparked lawsuits from people claiming it was their Constitutional right to risk their own lives.

Christian Scientists said it was "subversive of personal liberty" and civil libertarians claimed no one could force them to wear masks.

After the San Francisco Chronicle came out against mandatory masks, the death rate continued to climb, said Mak.

"An op-ed ran in the local paper w/headline 'What's The Use?' after a man got sick despite following public health guidelines," he explained. "A promised vaccine turned out to be bogus. Hundreds of citizens congregated on Dec. 16 to debate a masking order."

On Dec. 18, a bomb was sent to the city's public health official.

San Francisco’s Public Health Officer stuck by his guns, refusing to back down, and saying there was evidence that… https://t.co/WJYSsigFrT
— Tim Mak (@Tim Mak) 1587320584.0

On Dec. 19, he explained that officials voted down an order that would make wearing a mask mandatory.

"The dollar sign is exalted above the health sign," the public health officer said, according to Mak.

The worst rate of deaths from the flu pandemic was Dec. 30.

"It is of no time to quibble over the worth of the mask. It is the best thing we have found to date, and if you have anything better, for God's sake, give it to us," said a representative of an organized labor group.

Finally, the council reconsidered their vote and passed the order on Jan. 10. A whopping 600 new cases were reported just that day.

"Citizens were arrested/fined for not having masks on, but widespread disobedience of the order continue & large numbers of citizens refused to wear masks," said Mak, noting that the protests still continued.

"Over 2,000 people attended an event formed by San Franciscans called themselves 'THE ANTI-MASK LEAGUE,' denouncing the mandatory masking ordinance.

The protesters were a group of "public-spirited citizens, skeptical physicians, and fanatics," Crosby wrote.

It was something Mak noted was remarkably similar to what is happening today with the protests around the country demanding a reopening of the government even if it will kill people.

He noted that the public health officer was the 1919 version of Dr. Anthony Fauci, the NIH virus expert that has been appointed to the coronavirus task force by the president. President Donald Trump's supporters have now decided that they are against Fauci.

To this day, Mak said that no one credits wearing masks with helping stop the flu pandemic of the era.

While the flu was referred to as the "Spanish Flu," it actually had nothing to do with Spain, it's that Spain was the first country to talk about it openly. Other countries were suffering from it but were dealing with WWI battles. The flu spread throughout trenches during the war, killing over 45,000 American soldiers and hospitalizing 1.2 million soldiers.

Still hate Hillary's guts? Fine. But let's admit that she saw all this coming

During her 2016 presidential campaign, Hillary Clinton warned us that Donald Trump and his "basket of deplorables" were a threat to American democracy. She wasn't a prophet. She was simply offering a reasonable analysis based on the available evidence — and she paid an enormous political price for daring to tell that truth in public.

Two things can be true at the same time. Russian interference may well have played a role in Donald Trump's unlikely electoral victory in 2016. But it is also true that Clinton's truthful but politically unwise comment about the "deplorables" helped to swing the momentum — with the help of an eager and compliant mainstream news media — in Trump's direction.