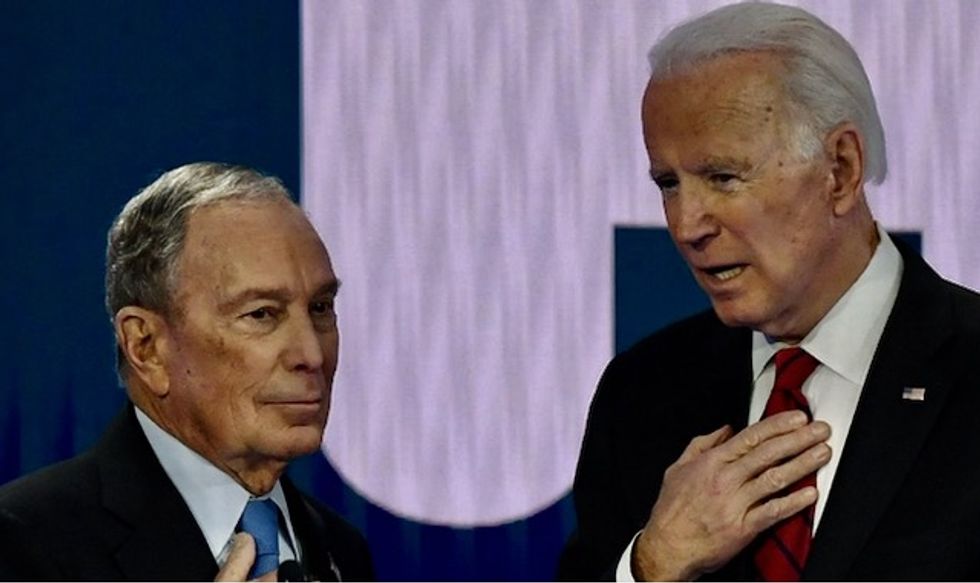 Congresswoman Alexandria Ocasio-Cortez was among the first critics to raise alarm Friday afternoon after The Intercept reported that a digital strategy firm owned by billionaire Mike Bloomberg "is in serious talks" to win a contract to take over work on Joe Biden's general election campaign against President Donald Trump.

"Along with Biden's campaign," journalist Ryan Grim, who broke the story, reported, the firm—called Hawkfish and which ran Bloomberg's primary campaign—is now "courting a wide swath of other progressive and Democratic organizations, opening up the possibility of Bloomberg gaining significant control over the party's technology and data infrastructure."

In a newsletter sent to readers to promote the story, Grim said the reporting "is a lot more important than it may seem at first, because it involves who or what controls the Democratic Party's data and tech infrastructure for the next generation." Grim in his newsletter also shared Ocasio-Cortez's initial reaction, which was one of alarm:

According to Grim, while Hawkfish is unproven in the competitive and high-stakes world of political consulting and campaign management—though Bloomberg can claim success in spending (by far) the most money ever to win the least number of delegates ever in a presidential primary campaign—Biden signing with the Bloomberg outfit could come with other perks.

Democratic operatives who've been pitched by Hawkfish say that the firm is able to offer extraordinarily low prices by operating at a loss subsidized by Bloomberg, whose wealth dangles as an added benefit that could come with signing the firm. A Hawkfish insider, who spoke on the condition of anonymity so as not to jeopardize employment, confirmed that the company is willing to operate at a loss in order to grab control of the party infrastructure, explaining that the firm hopes to offer a fee that would be small enough to entice the Biden campaign while passing muster with federal regulators.

While Grim reported that the Biden campaign was being pressured on both sides, "no final decision been made" on whether to accept Hawkfish's gestures. Meanwhile, Ocasio-Cortez was not alone among progressives in recognizing the troubling implications of this arrangement.

"This would be a mistake of colossal proportions," said Jess Morales Rocketto, a political activist and organizer, in response to Grim's reporting. "If you are a data driven electoral person, then the data on this is: they suck. Bloomberg spent $$$$$$$ and got nothing. He practiced such terrible digital tactics and they touted them like they were innovative."

This is where progressives & independents MUST draw their line in the sand. If Bloomberg takes over Biden’s campa… https://t.co/YjATChooE4
— Jen Perelman (@Jen Perelman) 1586548082.0

Even Howard Fineman, a political reporter and analyst for NBC News, recognized that this would be a disaster for Biden electorally.

"This would be a really terrible idea on a lot of levels," Fineman tweeted. "It would behoove ⁦Biden ⁩ to scotch this ASAP."