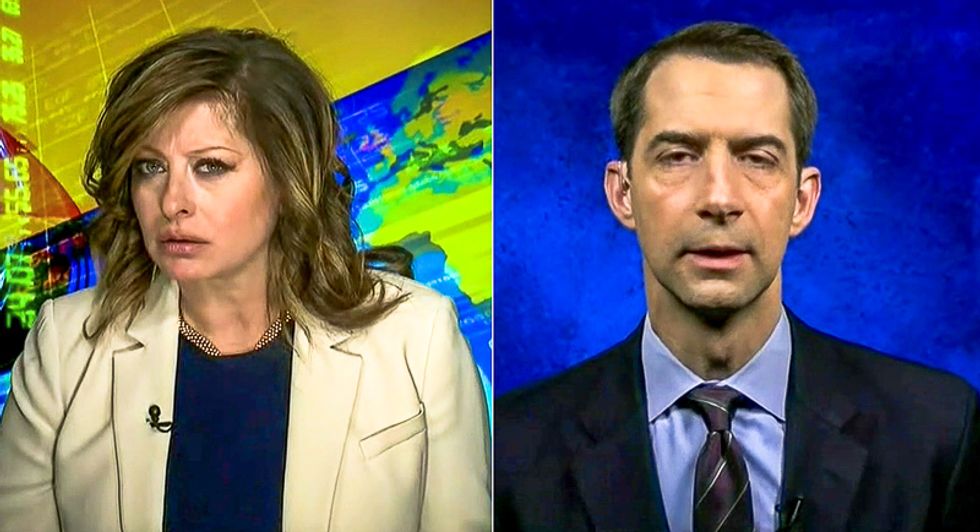 During an interview on Fox News's Sunday Morning Futures program, Cotton asserted that China is trying to "actively steal" a coronavirus vaccine from the U.S.

"The Chinese Communist Party has been stealing America's intellectual property for decades and they're not going to magically stop in the middle of a pandemic," Cotton opined. "In the middle of a pandemic, what's the most valuable intellectual property in the world? It's the research that our great laboratories and life science companies are doing on prophylactic drugs, therapeutic drugs and ultimately a vaccine."

"So, I have little doubt that the Chinese intelligence services are actively trying to steal America's intellectual property as it relates to the virus they unleashed on the world," he continued. "Because of course they want to be the country that claims credit for finding those drugs of finding a vaccine and then use it as leverage against the rest of the world."

Cotton went on to attack Chinese students who are studying abroad in the U.S.

"It's a scandal to me that we have trained so many of the Chinese Communist Party's brightest minds to go back to China, to compete for our jobs, to take our business and ultimately to steal our property," the senator said.

"I think we need to take a very hard look at the visas we give Chinese nationals to come to the U.S. to study," he added. "Especially at the post-graduate level in advanced scientific and technological fields."

According to Cotton, Chinese students should be studying "Shakespeare and the Federalist Papers."