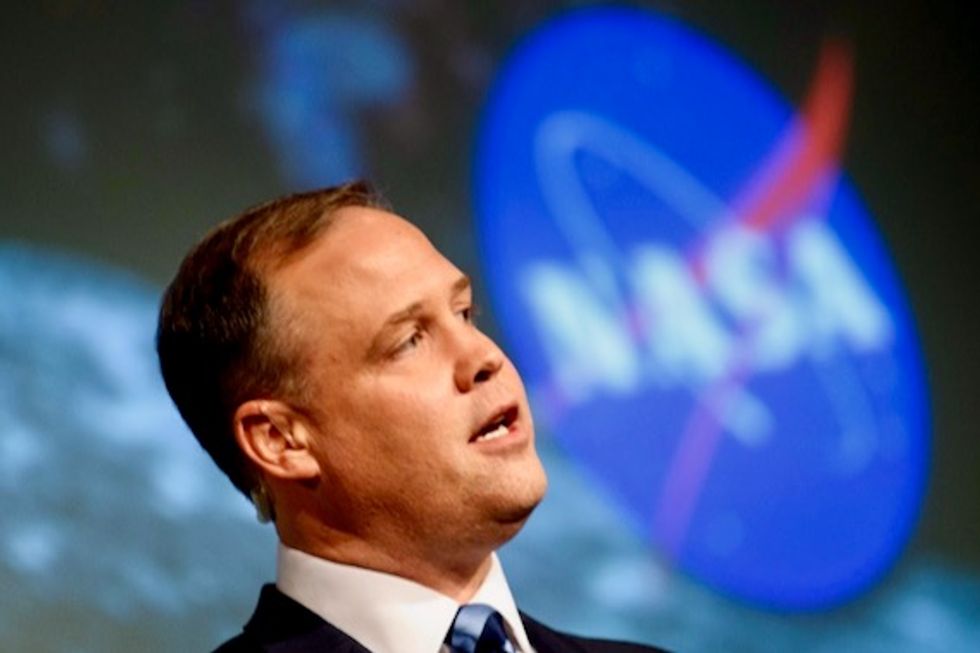 Jim Bridenstine, head of the US aerospace agency NASA, says he hopes to have austronauts back on the moon. (AFP/File / Brendan Smialowski)

According to Cleveland.com, President Donald Trump asked NASA Administrator Jim Bridenstine if an experimental disinfectant fog in development at the Glenn Research Center could be used to sterilize the inside of people's lungs to treat coronavirus.

"Cleveland’s NASA Glenn Research Center is collaborating with a Kent-based company called Emergency Products + Research (EP+R) to develop a fogging system that can be used to decontaminate rooms and ambulances for coronavirus," reported Sabrina Eaton. "Bridenstine displayed the devices for President Donald Trump during a Friday meeting at the White House."

"After Bridenstine explained how AMBUStat’s device fogs rooms, leaving every surface in the room sterilized, Trump asked whether people could breathe it in," continued the report. "Bridenstine clarified the cleansing occurs without people in the room."

This line of questioning occurred just a day after Trump caused a stir by asking his scientists at Thursday's press conference to look into the possibility of injecting people with household cleaner to get rid of the virus.

The 18-year-old accused of killing 10 people at a Tops Friendly Market in Buffalo, New York, was indicted for murder by a grand jury during a brief court appearance on Thursday. Payton Gendron, who is white, specifically targeted Black people in a predominantly Black neighborhood, according to material he allegedly posted online. “Payton, you’re a coward!” someone yelled from the courtroom gallery. Gendron is being held in jail without bail. His next court appearance will be on June 19. Gendron allegedly drove hours from Conklin, New York, to the Tops Friendly Market in Buffalo Saturday aftern...