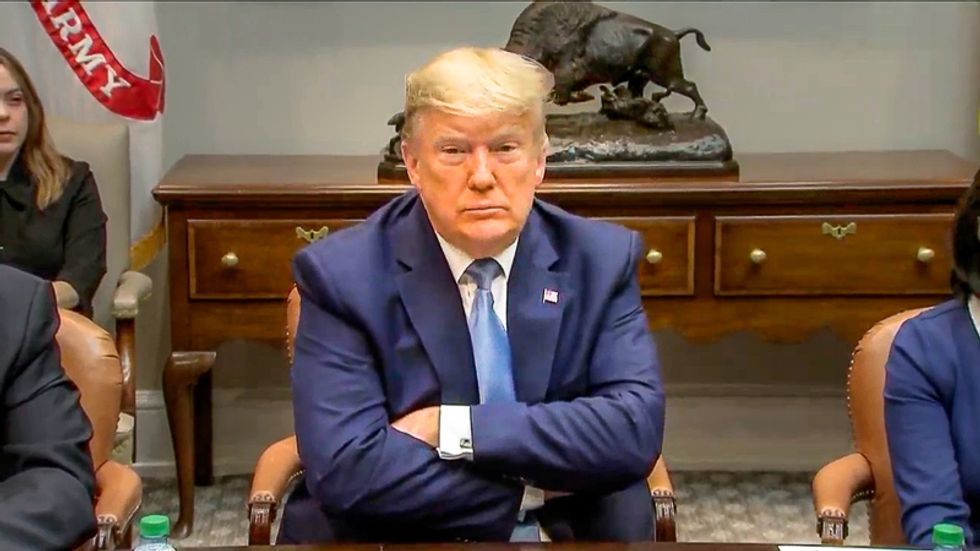 President Donald Trump's response to the COVID-19 coronavirus was detailed in a new Washington Post story.

"In the three weeks since declaring the novel coronavirus outbreak a national emergency, President Trump has delivered a dizzying array of rhetorical contortions, sowed confusion and repeatedly sought to cast blame on others," the newspaper reported.

"History has never known a crisis response as strong as his own, Trump says — yet the self-described wartime president claims he is merely backup," The Post reported. "America is winning its war with the coronavirus, the president says — yet the death toll rises still, and in the best-case scenario more Americans will die than in the wars in Vietnam, Korea, Afghanistan and Iraq combined."

The Coronavirus is very much under control in the USA. We are in contact with everyone and all relevant countries.… https://t.co/OwF1dR3caM
— Donald J. Trump (@Donald J. Trump) 1582580522.0

"As Trump has sought to remake his public image from that of a skeptic of the pandemic’s danger to a savior forestalling catastrophe and protecting hundreds of thousands of people from a vicious contagion, he also has distorted the truth, making edits and creating illusions at many turns," the newspaper noted. "Trump’s machinations have a dogged showman’s quality, using his omnipresence at daily White House news conferences — which sometimes stretch two hours or more and are broadcast to millions — to try to erase memories from his two months of playing down the crisis, sometimes scolding reporters who question his version of events."

Our CoronaVirus Team has been doing a great job. Even Democrat governors have been VERY complimentary!
— Donald J. Trump (@Donald J. Trump) 1583851451.0

"Message inconsistency has been a feature throughout Trump’s presidency, from his zigzagging positions on foreign and domestic policies to his up-and-down personal relationships and rivalries," the newspaper noted. "It also is attributable to his lack of ideological conviction, which makes him susceptible to being persuaded by advisers both inside and outside the government, often on the basis of self-interest."