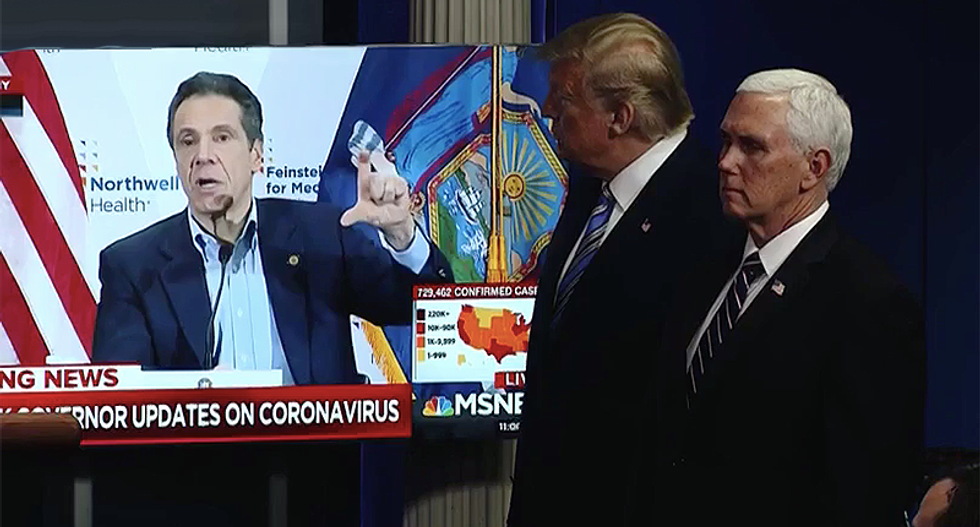 After droning on about what his latest efforts, President Donald Trump played a clip of Gov. Andrew Cuomo (D-NY) praising the state and federal response to the desperate need for hospital beds during the COVID-19 crisis.

Trump told his team to turn down the lights so he could play the small clip of Cuomo's praise, but the clip didn't contain what Trump really wanted people to see: the praise for him personally.

"Gov. Cuomo said today that no one who needed a ventilator was denied a ventilator. That's a beautiful statement, and I appreciate it," said Trump, treating the statement as if it was praise for him. "All governors are in that same position. We do have a clip that I thought would be appropriate to put up today. it will take two minutes. I think you will find it interesting, but we appreciate it. And let's see if we can do that. You will turn out the lights and we will see if we can do that. Thank you."

"What was the good part?" a voice asked from the press room.

"They did a better job on ventilators. no, Andrew had something nice to say. We won't go through that," said Trump. "But he really -- it was really a good statement. Do you want to put the rest of it up or do you not have it? I just think it's so good because it's bipartisan. You know, this is not about Democrats, Republicans. This is about a thing that hit our country the likes of which has never happened to us before. Wars, Civil War, sure, but First World War, the Second World War, they're not fought in this country. This is being fought in this country. It's being fought in 184 countries all over the world. It's terrible. But I want to thank Andrew, Gov. Cuomo for the statement. If you go a little bit further, it was even far beyond even that, so it was good. Do you remember? huh?"