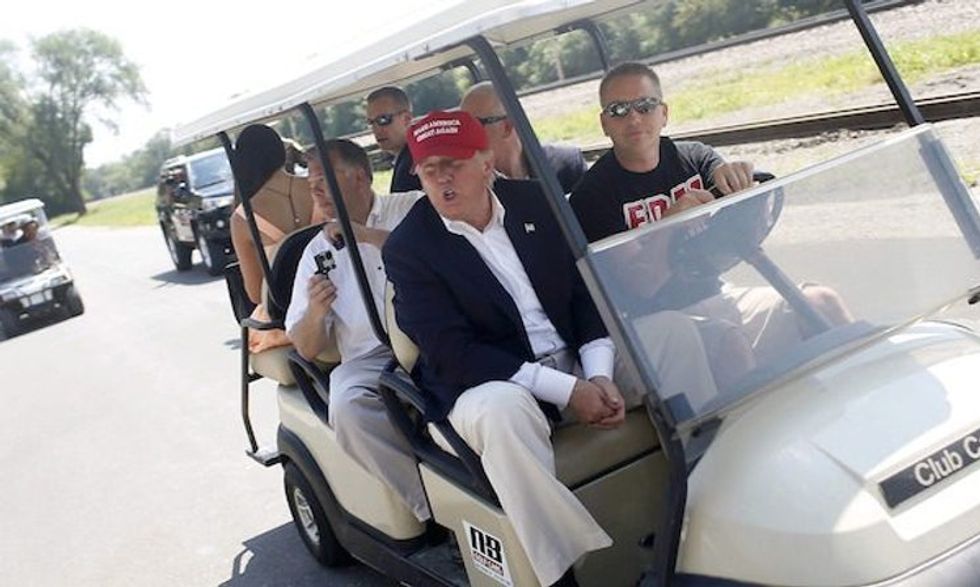 President Donald Trump's family company appears to be attempting to negotiate a rent decrease on the rent paid to a local government in Florida, The Palm Beach Post reported Saturday.

"Like other Palm Beach County businesses, the president’s golf club has been forced to close as the pandemic plays out. But there is that one major difference: The club is owned by the President of the United States, the commander-in-chief who made the call of when the country shut down and who will make the call on when America opens up for business again," the newspaper reported.

The paper obtained access to an email sent by Ed Raymundo, finance director at Mar-a-Lago and Trump International Golf Club in West Palm Beach on March 25th, inquiring about the company's $88,338 monthly rent.

“This mandate has resulted in the cancellation of events and forced the Club to close many of it’s (cq) amenities leaving limited services available to our members,” Raymundo wrote. “In addition, with many New York based members, the Governor’s most recent order requiring individuals traveling from the tri-state area to self-quarantine further hampers our operation. Your direction in this is greatly appreciated.”

Trump has frequently visited the golf course during his time as president.

"Of the three golf clubs Trump owns in South Florida, including Trump National Doral Florida and, Trump National Golf Club in Jupiter, the golf club in West Palm Beach, is by far his most frequented. Just a few miles from Mar-a-Lago, the president’s private club in Palm Beach, Trump has spent 83 of the 127 days he has visted Mar-a-Lago at Trump International.Trump hosts his annual Super Bowl party at the club and has played there with golf legends, political allies and White House aides," The Palm Beach Post reported.

Joe Rogan slammed for saying Jews are 'into money' during podcast

Podcaster and comedian Joe Rogan is getting heat after announcing on his show that Jewish people are "into money."

Rogan was speaking to Breaking Points podcasters Krystal Ball and Saagar Enjeti when he mentioned a CNN interview Ilhan Omar gave while sitting alongside Adam Schiff. Rogan brought up Omar's past comments where she suggested that pro-Israel lobbyists in the U.S. are motivated by money.