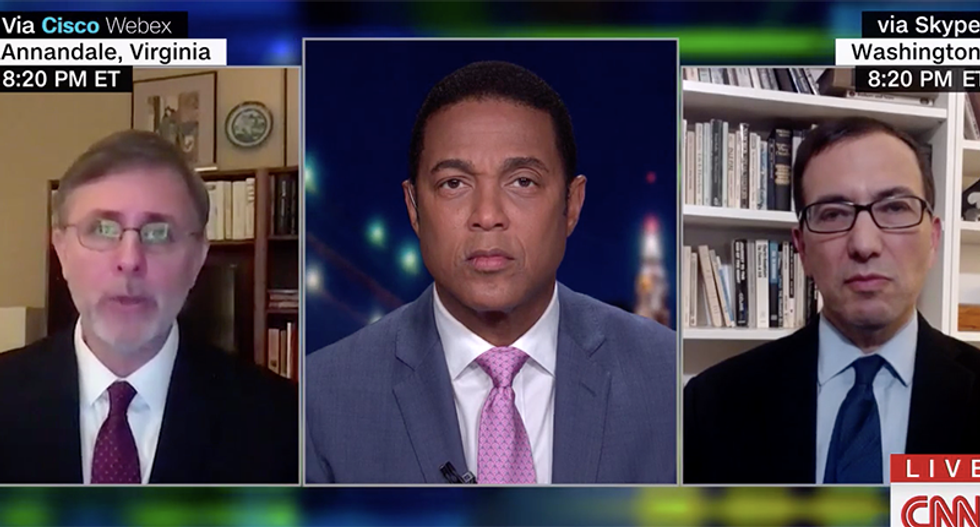 In an astounding New York Times expose on the warnings that President Donald Trump was given in January and February revealed that he was more concerned about the economy than he was about saving lives.

Speaking to CNN's Don Lemon Sunday, Times reporters discussed the "Red Dawn" email chain, a code for talking about the coronavirus spread. Department of Veterans Affairs' Dr. Carter Mecher wrote, "I'm seeing comments from people asking why WHO and CDC seem to be downplaying this. I'm certainly no public health expert (just a dufus from the VA), but no matter how I look at this, it looks [to] be bad ... The projected size of the outbreak already seems hard to believe...You guys made fun of me screaming to close the schools. Now I'm screaming, close the colleges and universities."

Both emails came at the end of January, but by the end of February Trump appeared in the White House press room saying that people should treat coronavirus "like the flu."

"They were quite concerned from January that this was a contagious disease that was going to make its way to the United States and was going to disrupt the way of life in the United States," said Times reporter Eric Lipton. "And it really starts in January, that they are comparing notes and just trying to decide, you know, how severe is this going to be. By the time you get to February, they are quite worried that there's already what's called community spread going on in the United States and they're anxious that the United States needs to start to move, particularly in areas where there are hotspots. Already as of mid-February, they need to start to move to shut down schools and businesses, because without a vaccine, as we all know, there's no way to really stop the spread of this virus other than what they call mitigation moves."

Lemon noted that the president appeared to be battling warnings and downplaying the virus early on and it was evident in his own task force that the economic concerns were taking precedent over safety.

"So you had a couple of things going on," said CNN political analyst Michael Shear. "First of all, you had a sort of war between the economic folks around President Trump who for much of -- from late January all the way through February and into the first half of March, many of them were arguing, pushing back against this idea that the country needed to take some sort of drastic action, the kind of mitigation efforts that

Eric was just talking about, to really shut down the economy, which of course everyone knew would have the kind of economic implications they've had."

"So, you had people on one side of the president making that argument, and national security and public health people on the other side making the case first that you needed to shut down some travel from China and later Europe, and to move to mitigation. But you had this kind of internal dynamic that we've seen play out over and over again in the Trump White House, which doesn't resemble the kind of policy sort of methodical policy process that previous presidents in both parties have undertaken," Shear continued. "So, you combine that with the president's disdain for science, the president's desire to look good and not to make people worried, and that produced weeks of delay that I think public health experts believed really cost lives, and Dr. Fauci even said that today. "