Trump White House sidelining Surgeon General following his comments on the threat that COVID-19 poses for communities of color: report 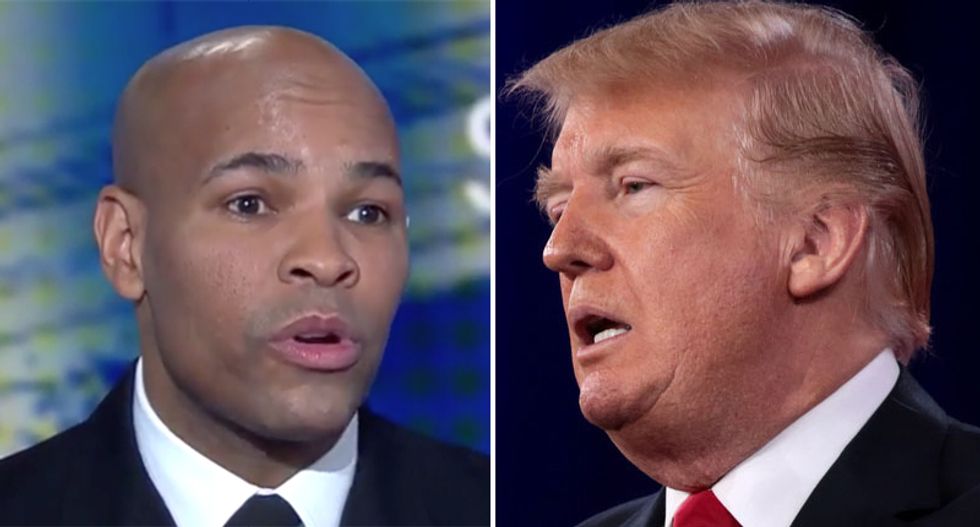 Surgeon General Jerome Adams, who is African-American, has recently spoken out about racial health disparities and the threat that people of color face in the United States during the coronavirus pandemic. And now, Politico’s Dan Diamond reports, Adam is being sidelined by the Trump Administration.

Diamond observes, “The Trump Administration took Surgeon General Jerome Adams off television last week after his controversial remarks on COVID-19’s threat to minorities, silencing the White House’s loudest voice on racial disparities even as concerns mount about risks to communities of color. Adams made just one TV appearance last week, a steep decline from the ten-plus TV appearances he made the prior week on programs like ABC’s ‘Good Morning America,’ CBS’ ‘This Morning’ and NBC’s ‘Today Show.’”

After Adams spoke at a press briefing on April 10, Diamond notes, some liberals and progressives criticized him for — as Diamond puts it — “shifting responsibility to minorities.” But Diamond observes that “health officials also fear that minimizing Adams means the White House is retreating from questions about its work on behalf of minority communities — a perennially sensitive issue for President Donald Trump and his administration.”

Rep. Maxine Waters of California and Rep. Alexandria Ocasio-Cortez of New York City are among the liberals and progressives who have been critical of Adams, accusing him of blaming the victim by bringing up risky behaviors among non-whites. Nonetheless, Adams has been outspoken about how hard COVID-19 has been hitting communities of color. On April 10, the U.S. surgeon general asserted, “This epidemic is a tragedy, but it will be all the more tragic if we fail to recognize and address the disproportionate impact of COVID-19 and an array of other diseases and risk factors on communities of color.”

An official for the U.S. Department of Health and Human Services (HHS), presumably interviewed on condition of anonymity, told Politico, “No one at the task force is really talking about this consistently but Jerome.” And another HHS official told Politico that Adams spent weeks discussing, with the NAACP and other organizations, the risks that coronavirus poses for Americans of color.