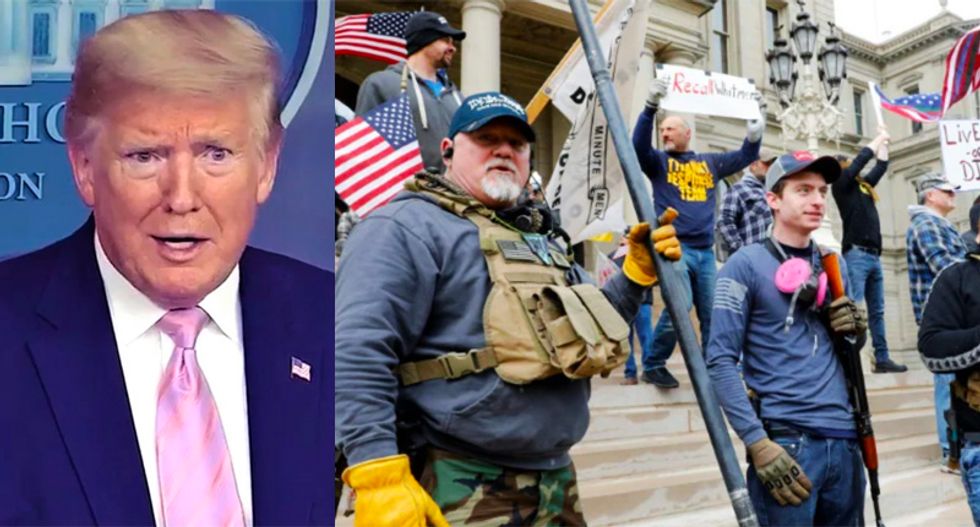 A Yale psychiatrist has warned that pro-Trump lockdown protesters, who exhibit similar psychology as "child soldiers," could quickly turn into "armed troops in the streets" if the president loses his re-election bid.

Dr. Bandy X. Lee, a forensic psychiatrist at the Yale School of Medicine who largely teaches at Yale Law School, said the armed protests were a natural evolution of the loyalty President Trump demands from his supporters. Many of these protests have evidently been organized by deep-pocketed groups allied with the president.

Lee, the author of the textbook "Violence," has been sounding the alarm about the danger posed by the president for years. She edited "The Dangerous Case of Donald Trump" after his election, with a group of fellow mental health professionals. The book's authors recently started a chat series entitled "Is America in an Abusive Relationship With Its President?"

Lee is also a project group leader at the World Health Organization Violence Prevention Alliance. She told Salon that Trump's recent call to "liberate" Democratic-led states was a dog whistle to his core supporters.

"Subconsciously, it is a loyalty test for the people," Lee said. "In Africa, where I did some ethnographic work, child soldiers would be recruited and made to kill a family member to demonstrate their allegiance to the government and not to the family. Similarly, in urban gangs in America, one may be challenged to kill a police officer to prove one's willingness to uphold gang rules over societal rules.

"When Donald Trump suggests that the virus be taken as a 'hoax', that people gather in churches or that people protest for their own sacrifice, he is actually testing people's loyalty to the 'laws' of his mind over the laws of nature, or even impulse for survival. The more he abuses them, the greater their devotion grows, since the psychological cost of admitting their mistake is ever higher — and so it becomes easier to dig a well of unreality than to see the obvious truth.

"We are now entering my specialty: public health approaches to violence prevention, and how to stop epidemics of violence before they happen," Lee added. "Individual violence is hardly predictable, since even the most violent individuals are not violent most of the time, but societal violence is entirely predictable. Prevention is still difficult, since we must act before we see things unfold, but it is highly effective. It is true of pandemics, and it is true of mental health. We can enlighten ourselves through science and prevent catastrophes before they occur."

Lee spoke with Salon about the president's response to the coronavirus and his embrace of protesters calling for an end to social distancing restrictions. Her views represent only those of the World Mental Health Coalition, of which she is president.

Trump has tried to play it both ways, arguing that his lockdown guidelines saved millions of lives while calling for an end to the lockdowns. How does this cognitive dissonance affect the public during a confusing and scary crisis?

Having no core but wishing to avoid accountability, he tries to cover all grounds. But the psychological effect on the public will eventually be the most harmful — not the devastating pandemic, the economic hardship or even the incompetence itself, but how he hypnotized and misled the public to cover up his ineptitude. To lose our collective mind, because an untreated disturbed person in an influential position has infected a third of the population with his distorted worldview, all to buttress his fragile sense of self, will be a great trauma for the nation to emerge from. His supporters will be the most severely traumatized, if they are able to wake up at all.

How will we cope with the fact that a mentally compromised president caused a devastating pandemic by eliminating a global response system only two years earlier, removed CDC experts in China just months earlier, caused an overwhelming majority of deaths by refusing to respond sooner, and worsened suffering and deaths by continuing to push wrong information? How do we recover from the oppression that states and health care workers had to suffer because the leader who was supposed to protect them obstinately withheld lifesaving supplies, watched with glee as those who did not praise him sufficiently suffered most, and created conditions where they had to compete with one another for equipment, when we were all supposed to be in this together? This is without counting the enormous mental health effects from enduring the extreme shelter-in-place measures that became necessary because of his mismanagement, when we are social animals. And this will only have been the medical side.

How will we cope with his economic destruction, which seems to have set in motion something far worse than the Great Depression, because he depleted all economic infrastructure while trying to balloon numbers for his re-election, even before the pandemic? How will we live with ourselves as we increasingly learn of a future that has been destroyed because he chose to bail out big businesses, including his own, while throwing pennies to working people as he asked them to worship him, which is what his name on the checks is about? Most developed nations are supporting worker salaries, to fuel economy and business as well as to help ordinary people — whose entrusted money the government is using. Human-caused injury is ultimately the most traumatizing.

People whom sociopaths have deceived and exploited often come away with a feeling that their soul has been hollowed out. They have witnessed the extremes of which humanity is capable.

What is your reaction to the growing number of protests against public health measures around the country?

You may have noticed that the more the president abuses his "base," the more they idolize him and obey what he says. He frames risking lives in service of him, so as to prop up his ruined economy and increase his re-election prospects, as "liberation" — and they come out in defiance of their own protection, demanding "choice." He is practicing his "total authority" and putting his armed troops in the streets. We would be mistaken to believe he will leave, or even let a losing election happen in the first place. Abuse of the mind is the worst kind, for you make people do what you wish against their own interests, and even extreme physical abuse becomes possible. He is not only getting away with shooting someone on Fifth Avenue, but a whole massacre.

Why do you think otherwise intelligent people are sometimes drawn to rhetoric suggesting the threat of a highly infectious and deadly virus is overhyped or even a "hoax"?

Mental symptoms do not discriminate between levels of intelligence. What we are seeing is what mental health experts warned would happen if we left a severely impaired person in an influential position without treatment, and what others have described as a cult. All the structures are in place for a personality cult, certainly, including the Fox News propaganda system, the pressure to conform from ever-growing cult members, and the insulation from facts that the president himself encourages by calling real news "the enemy."

But what I find most insidious is the contagion of symptoms: prolonged exposure to the president alone causes you to "catch" his worldview, and even the healthiest, soundest people turn "crazy," as if afflicted with the same condition as the president. This is a known phenomenon I have encountered a great deal from working in underserved settings. It is interchangeably called "shared psychosis," "folie à plusieurs" or "induced delusional disorder." The cure is removal. Then, quite dramatically, an entire afflicted family, street gan or prison cell-block that seemed almost "possessed" returns to normal. Politicians seem to keep waiting for the public to propel his removal, but in reality removal will justify removal: Remove the president first, and the people will follow.

What should the general public's response be when we see relatively small groups like these protesters spread misinformation that can have potentially deadly consequences?

Like cigarette smoking, shooting rampages and reckless driving, "freedoms" that endanger lives and curtail others' freedoms are not legitimate freedoms but a public health concern. People should fight for their legal rights. They should demand access to information as well as to expertise, and correct intervention. When experts call out abnormal signs, it is not a diagnosis but important information. When Dr. Li Wenliang of China detected a SARS-like virus, his observations were important and should have been heeded, not silenced. It is not up to mental health experts to say how it is to be done, but it is our responsibility to say what must be done, based on our best assessment. Our prescription is removal. Since issuing this prescription a month ago, I have repeatedly written about it and am waiting for the authorities to respond. And as with a viral pandemic, time translates to lives.