U.S. is pressuring Mexico to reopen factories -- despite the threat of coronavirus: report 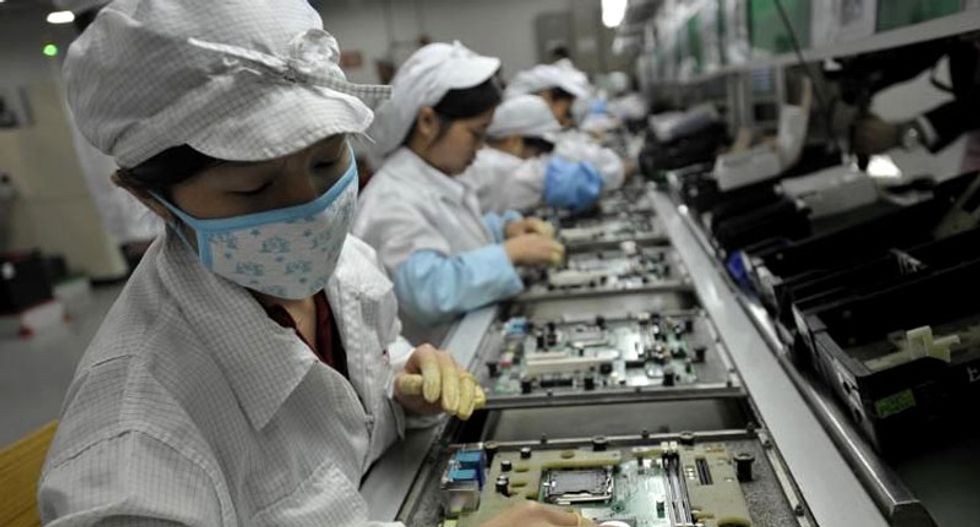 File photo of workers at a factory in Shenzhen, China, owned by Taiwan company Foxconn, which is is invest $40 million in the United States to ramp up manufacturing of high-end products (AFP)

President Donald Trump's administration wants Mexico to resume production at factories shuttered to prevent the spread of COVID-19, according to a new report.

"Even as COVID-19 deaths mount at factories in Mexico, the United States is sending a clear message: It’s time for plants that have stopped production to get back to work," the LA Times reported Thursday. "The U.S. government has mounted a campaign to convince Mexico to reopen many factories that were closed because of the country’s social distancing guidelines, warning that the supply chain of the North American free-trade zone could be permanently crippled if factories don’t resume production soon."

The pressure is not only coming from the government.

"Pressure has also come from American CEOs, more than 300 of whom sent a letter to Mexican President Andres Manuel Lopez Obrador saying they were “deeply concerned” about the shuttering of factories, and from the U.S. Department of Defense, which has asked Mexico to reopen plants that produce parts sold to defense contractors," the newspaper reported.

The efforts appear to be working.

"Mexican officials have begun to cave, despite warnings from health authorities here that reopening factories too soon could lead to widespread death," the LA Times reported. "Federal officials have agreed to allow automotive plants to reopen. And authorities in the border state of Baja California have lifted closure orders on at least 12 factories."

Former Republican political strategist Stuart Stevens on Wednesday sounded the alarm after Rep. Liz Cheney (R-WY) went down in resounding defeat in her primary race against a Trump-backed challenger.

Noting that Cheney had an exceptionally conservative voting record prior to her role on the House Select Committee investigating the January 6th Capitol attacks, Stevens argued that the Republican Party is no longer a party about policies or ideas.