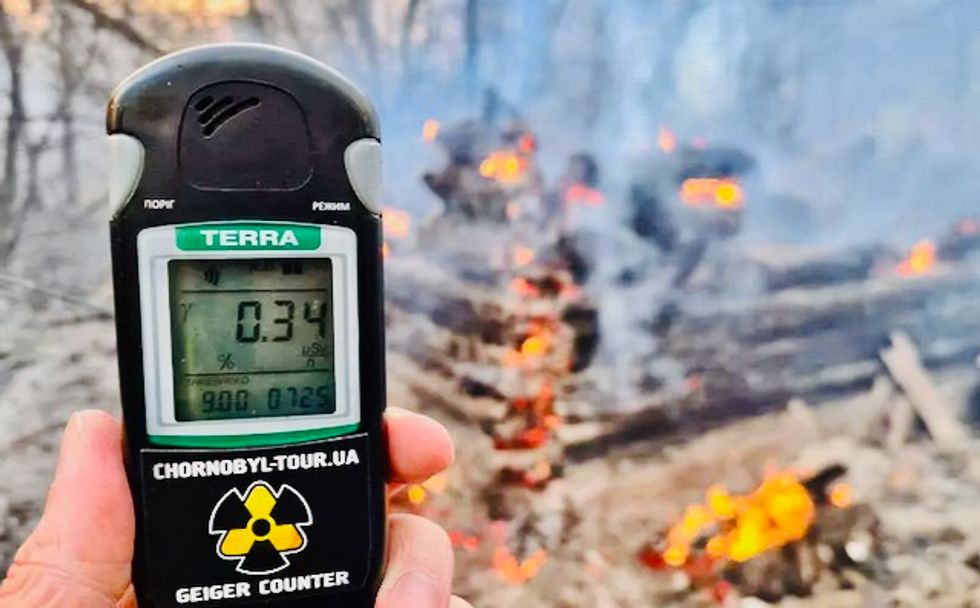 Ukrainian government agencies on Monday denied an official's claim that a forest fire in the Chernobyl exclusion zone caused a spike in radiation levels.

Firefighters are still battling a blaze that broke out at the weekend in the wooded zone around the ruined Chernobyl reactor that exploded in 1986 in the world's worst nuclear accident.

On Sunday, Yegor Firsov, head of Ukraine's state ecological inspection service, said in a Facebook post that radiation levels at the center of the fire were higher than normal.

His post included a video of a Geiger counter showing radiation levels 16 times higher than normal.

Ukraine's emergency service told AFP that no increase in radiation in the air had been detected.

"There is no spike in radiation levels," said Olga Kozak, a spokeswoman for the emergency service, which has deployed planes, a helicopter and more than 100 firefighters to fight the blaze,

Ukraine's government agency for managing the Chernobyl exclusion zone also reported that normal levels of gamma radiation "were not exceeded" in the area of the fire.

Later Monday, Firsov himself withdrew his claim, writing on Facebook that manmade radionuclides were not detected at the site of the fire.

He added that the fire in the exclusion zone did not affect the radiation situation in Kiev and the suburbs, refuting his earlier statement.

The power station contaminated a large swathe of Europe when its fourth reactor exploded in April 1986, with the area immediately around the plant the worst affected.

People are not allowed to live within 30 kilometers (18 miles) of the power station.

The three other reactors at Chernobyl continued to generate electricity until the power station finally closed in 2000. A giant protective dome was put in place over the fourth reactor in 2016.

Fires occur regularly in the forests near the Chernobyl power plant.