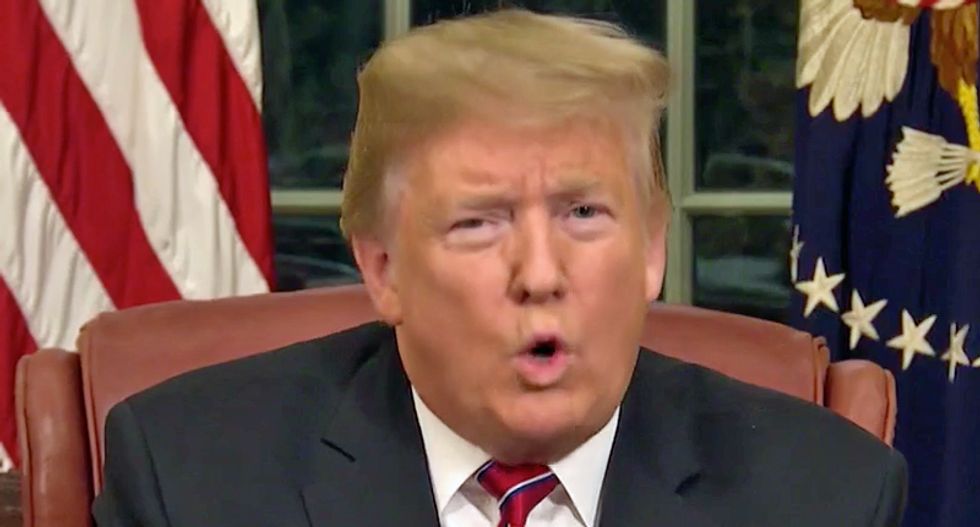 The United States became the first country to report more than 2,000 coronavirus deaths in a single day, marking a grim milestone as huge swathes of the globe celebrated the Easter holiday weekend under lockdown from home.

The global death toll from the virus surged past 103,000, with the United States quickly becoming the epicentre of the pandemic that first emerged in China late last year.

Europe has so far shouldered the majority of all deaths and infections -- though there were signs of hope the curve could be starting to flatten in some of the hardest-hit countries.

Numbers out of Spain offered a shred of hope Saturday: 510 new deaths, a dip in fatalities for the third day in a row.

France reported nearly 1,000 new deaths Friday but confirmed a drop in the number of intensive care patients for a second day running.

Italy meanwhile said the number of daily deaths was starting to level off -- though the government resisted pressure to lift its lockdown, extending confinement measures until May 3.

But Britain on Saturday recorded its second highest daily toll, as virus-stricken Prime Minister Boris Johnson made "very good progress" after being released from intensive care, a spokeswoman said.

With 18,849 dead, Italy has the highest global death toll, but is likely to soon be surpassed by the United States.

On Friday, the US reported 2,108 new deaths, the highest daily toll out of any country since the outbreak was first reported in the central Chinese city of Wuhan in December.

With more than half a million reported infections, the United States already has more coronavirus cases than anywhere else in the world.

The global infection rate now stands at more than 1.7 million, though with many countries only testing the most serious cases the real numbers are believed to be higher.

But President Donald Trump said that with the US infection trajectory "near the peak" and social distancing working well, he was considering ways to re-open the world's biggest economy as soon as possible.

He acknowledged the risk of higher death tolls if businesses restart too soon -- even as the World Health Organization cautioned countries against lifting lockdown measures too quickly.

"But you know what? Staying at home leads to death also," Trump said, pointing to the massive economic suffering for millions of Americans.

It is unclear when that will be possible to end the lockdown, with New York Governor Andrew Cuomo saying millions in the state -- the hardest hit in the US -- will have to be tested before it can reopen.

New York hospitals are straining to treat a steady influx of patients, and the unclaimed dead -- up to 25 a day -- are now being buried in unmarked mass graves in a public cemetery in the state.

Easter weekend kicked off in near-empty churches around the world as parishioners remained locked in their homes.

More than four billion people -- over half the world's population -- are confined to their homes from New York to Naples to New Delhi as governments scramble to contain the pandemic's deadly march across the globe.

Pope Francis was due to livestream his Easter Vigil from an empty St Peter's Basilica later Saturday, after he presided over an empty Good Friday Service to kick off the holiday weekend.

The pontiff was praised by Italy's prime minister for his "gesture of responsibility" to observe Easter in private.

"We will remember this spring as the one in which, for the first time in history, the pope presided over the general audiences and conducted the Angelus (prayer) by livestream," Giuseppe Conte wrote in Italy's Catholic daily Avvenire.

"His words, although spoken far from Saint Peter's Square, which was wrapped in an unreal silence, have reached everyone."

Worshippers in Rome stocked up on traditional Easter cakes ahead of the weekend, some piling them onto scooters outside of grocery stores, eager to maintain parts of the holiday tradition.

Across Europe, government urged citizens to stay home for the weekend, fearing people would flock outdoors to enjoy the warm weather or flee to holiday homes.

France deployed some 160,000 gendarmes to patrol busy roads, while long queues of customers formed outside of butcher shops in Paris as residents stocked up on holiday goods.

Turkey said Friday that a 48-hour lockdown order would be rolled out in dozens of cities, including Ankara and Istanbul, as its virus death toll topped 1,000.

Shoppers crowded supermarkets in Istanbul late Friday in a rush to stock up on supplies before the curfew kicked in at midnight.

The World Health Organization has warned that prematurely easing lockdown measures could spark a dangerous return of the disease.

Countries, especially in Asia, are worried about a possible second wave of infections imported from travellers as life creeps back to normal.

But governments are under pressure to strike a balance between keeping people safe and keeping already battered economies stable.

China, where the virus first emerged, has begun to loosen its lockdown on citizens after its official daily COVID-19 figures dropped.

The pandemic has shaken the global economy, and the International Monetary Fund -- which has $1 trillion in lending capacity -- said it was responding to calls from 90 countries for emergency financing.

It said this week the world now faces the worst downturn since the Great Depression of the 1930s.

A dramatic slump in oil demand, worsened by a Saudi-Russia price war, has sent prices crashing to near two-decade lows in recent weeks.

In much of the developing world, there are fears the worst is still to come.

In Brazil, authorities confirmed the first deaths in Rio de Janeiro's slums, where overcrowding and poor sanitation have raised fears of a catastrophe.