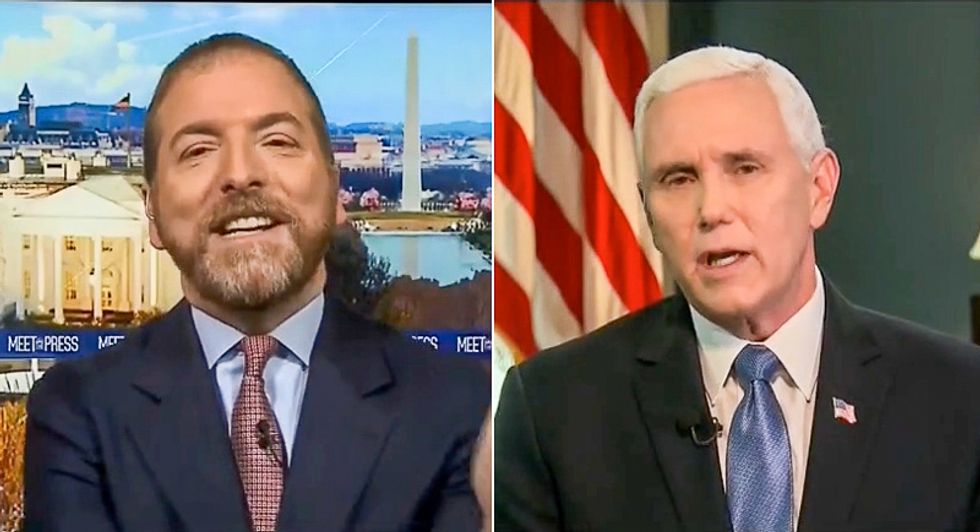 NBC host Chuck Todd on Sunday accused Vice President Mike Pence of failing to answer his questions about the Trump administration's reaction to the novel coronavirus.

In an interview on Meet the Press, Todd asked the vice president why President Donald Trump had contradicted his own CDC guidelines by tweeting a call to "liberate" certain states from stay-at-home policies.

But the vice president declined to give a straight answer as he had throughout the 20 minute interview.

"Why is the president trying to undermine the guidance you've been laying out?" the NBC host continued. "He laid out this guidance on Thursday and undermined it on Friday."

"Chuck, I don't accept your premise," Pence replied. "And I don't think most Americans do either."

The interview earned Todd scorn on Twitter, where many argued that trying to get answers out of Pence is a waste of time.

Holy hell @chucktodd stop letting #pence filibuster his horseshit. Why do I ever turn on @MeetThePress ?
— ChefChad (@ChefChad)1587302374.0

Chuck Todd should have cut him off. Be tougher on these guys or don't give them free time to spread more lies. #CoronavirusLiar
— Louise Krueger (@Louise Krueger)1587302542.0

Chuck Todd's ability to stop Trump from spreading false information is as useful as a paper umbrella in a shit stor… https://t.co/iJslkFw00Q
— RedResistance 🇺🇸💯 (@RedResistance 🇺🇸💯)1587302594.0

the ghost of Tim Russert should come back and smack the ever loving shit out of @chucktodd hes not even a pimple o… https://t.co/BdKpa48IB3
— Kanyes buthole (@Kanyes buthole)1587302614.0

Listening to @chucktodd give unfettered time to @VP on @MeetThePress is like sitting through a second grade violin… https://t.co/jfUZTda7R7
— jubilee (@jubilee)1587302681.0

My god @chucktodd is the worst interviewer in the history of the world. It’s absolutely inarguable. #MeetThePress
— Matt Vogt (@Matt Vogt)1587305602.0

Well, that was an extremely bullshit filled interview @chucktodd had with the VP. Sorry Chuck, he owned you.
— RTracey (@RTracey)1587305845.0

Chuck Todd is letting Pence completely control this interview and not getting any real questions in. His interview… https://t.co/saA25gYq0K
— Kristen Parisi (@Kristen Parisi)1587305941.0

.@chucktodd needs to learn how to rein in the lies of Pence instead of just letting him go on and on with lie after lie. @MeetThePress
— GencoPuraUSA (@GencoPuraUSA)1587305969.0

Watching Meet the Press. Pence is on. Chuck Todd doesn’t know how to conduct an interview that shuts down the lying and surface the truth
— Eliot Howard (@Eliot Howard)1587305979.0

OMG @chucktodd - you can interrupt someone, even the VP, when they’re spewing endless, useless propaganda! Do your job!
— ggindaltx (@ggindaltx)1587306017.0

Normally, I find @chucktodd's propensity for talking over guests infuriating. But his allowing Vice President for B… https://t.co/EdRc1B8BzM
— Milton Kent (@Milton Kent)1587306186.0