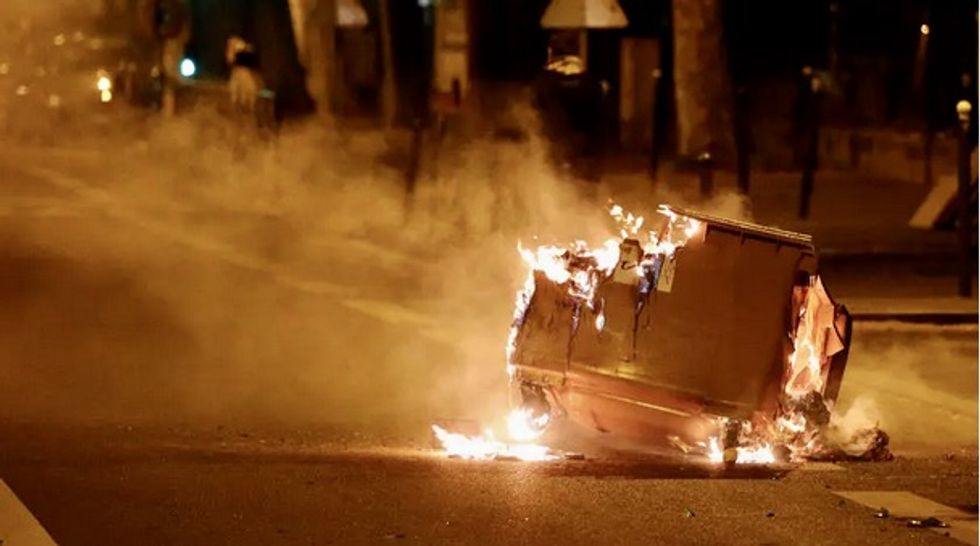 A rubbish bin burns in the street during clashes in Villeneuve-la-Garenne, in the northern suburbs of Paris (Geoffroy Van der Hasselt, AFP)

Three nights of unrest in the French capital’s northern suburbs have stoked fears of a major flare-up in deprived neighborhoods where weeks of lockdown have exacerbated the simmering tensions between restless youths and police.

Six weeks into France’s nationwide lockdown, Zouhair Ech-Chetouani is an increasingly worried man. In more than 20 years of social work, the community leader says the restive northern suburbs of Paris have never felt quite so tense.

According to Ech-Chetouani, the strict confinement rules to halt the spread of the coronavirus pandemic, coupled with tough policing enforcing those rules, have mixed up an “explosive cocktail” in areas already blighted by poverty, unemployment and now a worsening health crisis.

“The spark has been lit,” he says, referring to the unrest that has swept through several northern suburbs of Paris in recent nights.

The trouble in Villeneuve-La-Garenne first flared late on Saturday after a motorcyclist collided with the open door of an unmarked police car during a pursuit. Witnesses said the officers had deliberately opened the door into the motorcyclist's path, a claim denied by police.

The skirmishes lasted into the early hours of Sunday before calm was restored but unrest broke out again the following two nights, spreading to other suburbs north of Paris. Police said fireworks were aimed at them and several cars were torched while officers fired tear gas to disperse the troublemakers.

A history of violence

Relations between police and residents have long been a fraught issue in France’s economically poor and ethnically diverse suburbs, where men of African and North African origin complain about being routinely stopped and searched simply because of the colour of their skin.

A study by France's National Centre for Scientific Research has shown that blacks are 11.5 times more likely to be checked by police than whites, and those of Arab origin are seven times more likely.

In what has become a depressing cycle of violence and resentment, such routine checks can lead to violent altercations and eventually riots, a daunting prospect the French government is desperate to avoid as it grapples with a health emergency.

In late March, the satirical weekly Le Canard Enchainé, a leading source of investigative journalism, reported that the Interior Ministry had quietly asked police chiefs to adopt a light touch as they seek to enforce the lockdown in restive suburbs so as not to inflame tensions.

However, activists on the ground say the police approach has been anything but light.

On the first day of confinement, the Seine-Saint-Denis department northeast of Paris – home to France’s poorest districts – accounted for 10 percent of all fines handed out for breaching the lockdown despite comprising just over 2 percent of the country’s population.

Since then, videos of heavy-handed arrests have circulated widely on French social media, along with calls for revenge.

“You’re much less likely to see police fining and harassing parents who play with their children in the Bois de Boulogne,” says Echi-Chetouani, referring to the park that borders the 16th arrondissement (district) of Paris in the French capital’s affluent west.

The social worker says the situation has considerably worsened since the start of the lockdown, which he argues has only heightened a sense of power and impunity among the police.

“When there are people out in the streets, police abuses are less likely to go unnoticed,” he explains. “But with residents locked up at home, the police have become more violent and arbitrary.”

He adds: “Of course, most officers do their work conscientiously. But it only takes a few bad apples eager to settle scores for things to get out of hand very fast.”

“The current state of sanitary emergency should not be in breach of the rule of law and does not justify discriminatory checks or unjustified and disproportionate force,” the statement read.

Police unions, which did not return FRANCE 24’s requests for comment, have rejected the accusations, noting that officers are constantly targeted and provoked by youths in tense suburbs.

‘All we got was an order to stay home’

Critics of police tactics say they reflect a wider failure to take into account the specificities of the impoverished and densely populated suburbs as they grapple with the twin challenges of a health emergency and home confinement.

While Seine-Saint-Denis was hit by Covid-19 later than other territories, health officials have since declared it one of four French departments suffering from an “exceptional” spike in deaths.

The combination of large families in cramped quarters and the lack of doctors and hospital beds has left the local population particularly exposed to the virus. And while many Parisians fled to countryside homes or switched to working from home, the capital’s poorer suburbs have supplied most of the workers who keep the metropolis running.

“Nurses, cashiers, caregivers, street cleaners, security agents, delivery men… Basically all the people who prop up the country today, all those who hold the front line and put themselves in danger, they come from the working-class districts, from [Seine-Saint-Denis]!” said Stéphane Peu, a local communist lawmaker, in an interview with Le Monde.

The French newspaper notes that several other factors conspire to make the coronavirus lockdown more challenging in banlieue high-rises than elsewhere in France, including the dearth of food outlets. In northern Bondy, for instance, there is just one supermarket for a population of 21,000.

Seine-Saint-Denis is also home to France’s youngest population, with 30% of inhabitants aged under 20.

“By and large, the lockdown is being respected in the suburbs, but there comes a point when restless youths in overcrowded homes need a breath of fresh air,” says Echi-Chetouani, lamenting the authorities’ failure to prepare for lockdown.

“There has simply been no outreach, no attempt to explain to the locals how the virus spreads and why social distancing is important to protect vulnerable family members,” he adds. “All we got was an order to stay home, followed by repression.”