Virus-hit cruise ship arrives in Florida -- and another on way 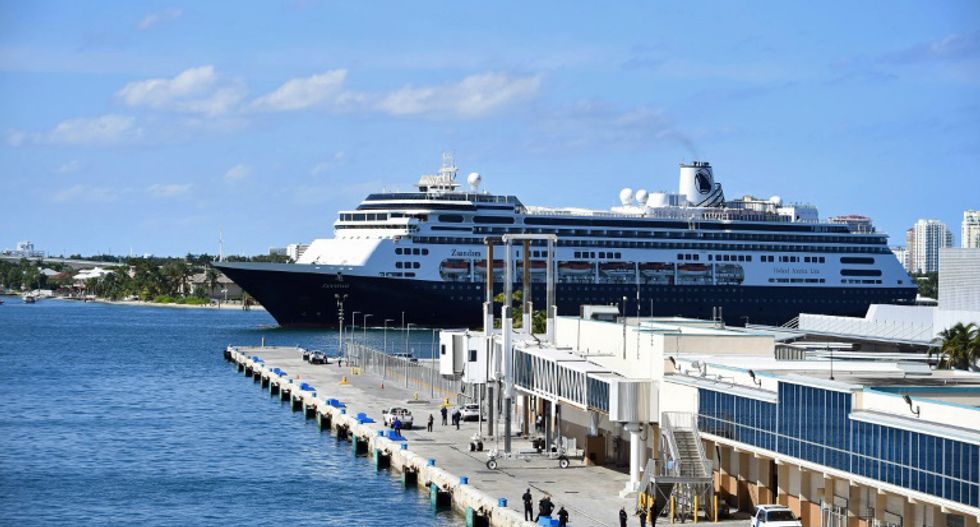 The cruise ship Zaandam is seen here as it prepares to dock at Port Everglades in Fort Lauderdale, Florida. AFP / CHANDAN KHANNA

A virus-hit cruise ship with dozens of ill passengers and crew docked in Florida on Thursday after being barred from several South American countries, concluding a harrowing time at sea for those stranded aboard.

The Zaandam, operated by Holland America Line, tied up at Port Everglades in Fort Lauderdale, and its sister ship the Rotterdam was not far behind.

Their arrival comes after days of protracted negotiations about whether they should be allowed to enter Florida, and how they could safely dock and disembark -- as concerns mounted for the passengers.

Four people have died on the Zaandam, for reasons not yet disclosed.

"We are so happy to be able to get our guests home and assist those few who need additional medical services," said Holland America president Orlando Ashford.

"These travelers could have been any one of us or our families, unexpectedly caught in the middle of this unprecedented closure of global borders that happened in a matter of days and without warning."

All told, 107 passengers and 143 crew reported flu-like symptoms during the voyage, but many have since recovered.

A total of 14 people -- 13 passengers and one crew member -- are to be taken to a hospital in Florida, officials said.

"We have one hospital that is able to take some of the critically ill. They have the capacity to do that," said Florida's Republican governor, Ron DeSantis.

A total of 1,250 passengers and 1,186 crew members were stranded at sea on the Zaandam and the Rotterdam, which came to its sister ship's aid last week, loaded with supplies.

DeSantis initially said he did not want the ships to dock, for fear the ill passengers would tax the state's already strained health care system.

With more than 8,000 coronavirus cases and at least 128 deaths, the Sunshine State -- home to many retirees -- has the fifth-most cases in the United States.

But late Wednesday, DeSantis changed his tune, telling Fox News that he had not realized there were US citizens involved.

"We actually have Floridians" aboard the Zaandam, he said.

President Donald Trump had said the ships needed to be evacuated, saying: "We have to help the people. They're in big trouble."

Fort Lauderdale Mayor Dean Trantalis said Holland America, which is owned by Carnival, had agreed to a "strict set of protocols" governing how the passengers would disembark.

"It's all going to be done in ways that are not going to expose the people of Florida to any of the illnesses that may be on there," DeSantis told Fox News on Thursday.

Most of the passengers are expected to be deemed "fit for travel" after health checks, and will return home through a combination of charter flights and private cars.

They will be "transported in coaches that will be sanitized, with limited person-to-person contact and while wearing masks," Holland America said Wednesday.

Several dozen more with mild symptoms will remain aboard in isolation until they recover.

Trump said he was working with British and Canadian authorities to repatriate their nationals who are on the cruise liners.

'Good to be back'

The desperate situation aboard the Zaandam attracted worldwide publicity, but several ships are seeking permission to dock at Port Everglades.

Princess Cruises announced that its Coral Princess had requested clearance, and would arrive in Florida on or about Saturday -- with 12 confirmed COVID-19 cases on board.

The Zaandam, which left Buenos Aires on March 7, was originally meant to finish the trip in Chile on March 21 but changed course due to the virus outbreak.

After negotiations while the ships waited in waters off Panama, it and the Rotterdam were allowed to transit the Panama Canal in order to head to Florida.

Rick De Pinho, a 53-year-old attorney, and his wife were among those passengers transferred to the Rotterdam because they were healthy.

"Good to be back," a jubilant De Pinho told AFP after their ship docked in Florida.