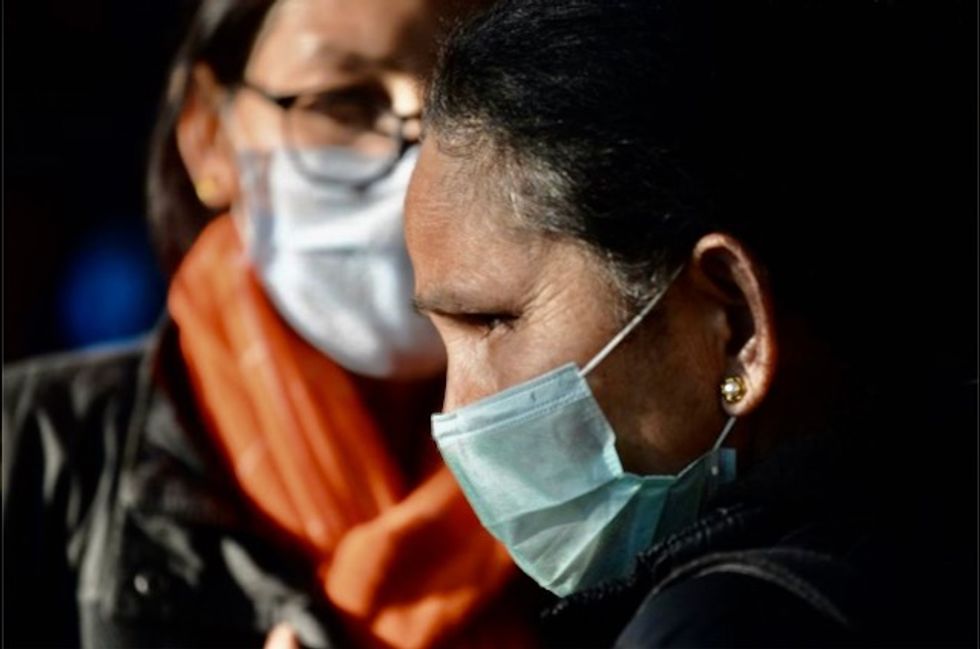 People wear facemasks amid fears of the spread of COVID-19 novel coronavirus, (AFP)

The global coronavirus death toll approached 200,000 on Saturday as the United Nations launched an international push for a vaccine to defeat the pandemic.

Governments around the world are struggling to limit the economic devastation unleashed by the virus, which has infected nearly 2.8 million people and left half of humanity under some form of lockdown.

The scale of the pandemic has forced medical research on the virus to move at unprecedented speed, but effective treatments are still far away and the United Nations chief said the effort will require cooperation on a global scale.

"We face a global public enemy like no other," Secretary-General Antonio Guterres told a virtual briefing on Friday, asking for international organizations, world leaders and the private sector to join hands.

"A world free of COVID-19 requires the most massive public health effort in history."

AFP / STR The scale of the pandemic has forced medical research on the virus to move at unprecedented speed, but effective treatments are still far away

The vaccine should be safe, affordable and available to all, Guterres stressed at the meeting, which was also attended by the leaders of Germany and France.

But notably absent from the meeting were the leaders of China, where the virus first emerged late last year, and the United States, which has accused the UN's World Health Organization of not warning quickly enough about the original outbreak.

The UN chief's vaccine appeal came a day after US President Donald Trump prompted outcry and ridicule with his suggestion that disinfectants be used to treat coronavirus patients.

"Is there a way we can do something like that, by injection inside or almost a cleaning?" Trump mused during a televised briefing. "It sounds interesting to me."

As experts -- and disinfectant manufacturers -- rushed to caution against any such dangerous experiment, the president tried to walk back his comments, saying he had been speaking "sarcastically."

The United States is the hardest-hit country by far in the pandemic, recording more than 51,000 deaths and over 890,000 infections.

The world's biggest economy has been hammered by the pandemic, with 26 million jobs lost since the crisis began, and American leaders are under pressure to find ways to ease social distancing measures.

Despite criticism from Trump, the governor of Georgia allowed some businesses, including nail salons and bowling alleys, to reopen on Friday, sparking both criticism and relief.

The mayor of the state's capital Atlanta condemned the "irresponsible" move, telling ABC News: "There is nothing essential about going to a bowling alley or giving a manicure in the middle of a pandemic."

But some in the city cherished the opportunity to re-engage with society.

"I actually had a great time," beamed Tili Banks, 41, as she and a friend left a bowling alley.

"I was just so happy to be out that I didn't even realize that I had these people's bowling shoes on when I walked outside."

Global COVID-19 deaths have climbed past 195,000, according to an AFP tally, but new reported cases appear to have leveled off at about 80,000 a day.

AFP / ULISES RUIZ Global COVID-19 deaths have climbed past 195,000, according to an AFP tally, but new reported cases appear to have leveled off at about 80,000 a day

The daily death toll in Western countries seems to be falling, a sign hopeful epidemiologists had been looking for, but the WHO has warned that other nations are still in the early stages of the fight.

The unprecedented situation has left the world staring at its worst downturn since the Great Depression, and world leaders are trying to balance public health concerns with economic needs.

Sri Lanka said it would lift a nationwide curfew on Monday after more than five weeks, as Belgium became the latest European nation to announce an easing from mid-May.

On the other side of the world in Australia and New Zealand, people held vigils from the isolation of their own driveways to pay tribute to their war veterans on Anzac Day.

AFP / Saeed KHAN In Australia and New Zealand, where sweeping social distancing measures are in force, people held vigils from the isolation of their own driveways to pay tribute to their war veterans on Anzac Day

"We (usually) go away to our various watering holes, pubs or clubs, and we enjoy our mates... you talk about the old times, whilst you were serving and you talk about someone who's missing this year that was there last year," said Ray James, an Australian veteran of the Vietnam War.

"It's going to be sad this year because we won't be able to do that."

Across the Muslim world, hundreds of millions of faithful opened the Ramadan holy month under stay-at-home conditions, facing unprecedented bans on prayers in mosques and on the traditional large gatherings of families and friends to break the daily fast.

AFP / STR In the Islamic holy city of Mecca in Saudi Arabia, the Grand Mosque, usually packed with tens of thousands of people during Ramadan, was deserted as religious authorities suspended the year-round Umrah pilgrimage

In the Islamic holy city of Mecca in Saudi Arabia, the Grand Mosque, usually packed with tens of thousands of people during Ramadan, was deserted.

"We are used to seeing the holy mosque crowded with people during the day, night, all the time... I feel pain deep inside," said Ali Mulla, the muezzin who gives the call to prayer at the Grand Mosque.

Despite the coronavirus threat, clerics and conservatives in some countries including Bangladesh, Pakistan and Indonesia -- the world's largest Muslim-majority nation -- have pushed back and refused to stop gatherings in mosques.