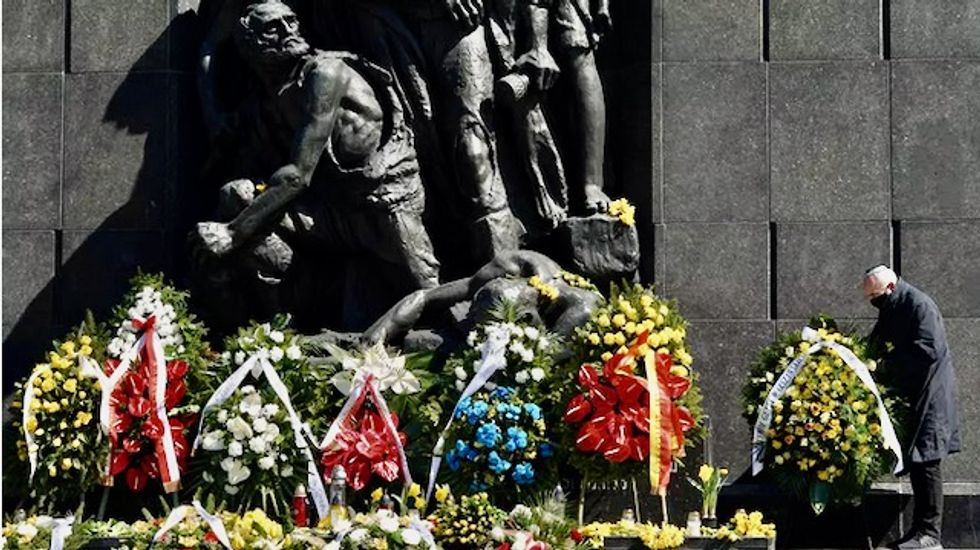 Zygmunt Stepinski, head of the Polin Museum of the History of Polish Jews, lays a wreath to mark the 77th anniversary of the doomed rebellion by Jewish partisans against Nazi Germany, in front of the Warsaw Ghetto Uprising memorial anniversary JANEK SKARZYNSKI AFP

Poland commemorated the 1943 Warsaw Ghetto uprising on Sunday, replacing its annual official ceremonies with low-key gatherings on site or online as the coronavirus pandemic prevented any big events.

Wearing a protective mask, Poland's chief rabbi Michael Schudrich recited a prayer at the monument dedicated to the uprising in front of a few dozen people who observed social distancing rules before laying a wreath.

April 19 commemorates the day in 1943 when Jewish insurgents began a violent resistance against police and SS auxiliary troops who planned to deport the Jews in the ghetto to concentration camps.

Their revolt, which the insurgents knew was doomed but allowed them to die fighting rather than in gas chambers, bogged down the German advance into the ghetto by several weeks.

The main part of the revolt lasted 10 days but it was only definitively ended almost a month later on May 16 when the Nazis demolished the Great Synangogue of Warsaw.

An estimated 13,000 Jews were killed in the ghetto during the uprising. It was the largest single act of Jewish resistance against Nazi Germany.

On Sunday sirens went off in Warsaw at midday, like every year, honoring the rebellion.

In the streets, there was no distribution of daffodils which Warsaw residents usually pin to their clothes to mark the day, and which resemble the yellow badges Jews were ordered to wear by Nazi Germany.

Instead, the Polin Musem of the History of Polish Jews published a template online inviting Poles to use it to make their own yellow flowers out of cardboard and post their picture wearing it on social networks -- a call that was widely followed.

The museum is also planning to re-broadcast online conferences, documentaries, ceremonies and artistic events linked to the anniversary.