WATCH: Gov. Cuomo’s somber briefing takes a hilarious turn as his brother Chris calls in to discuss his coronavirus-fueled hallucinations 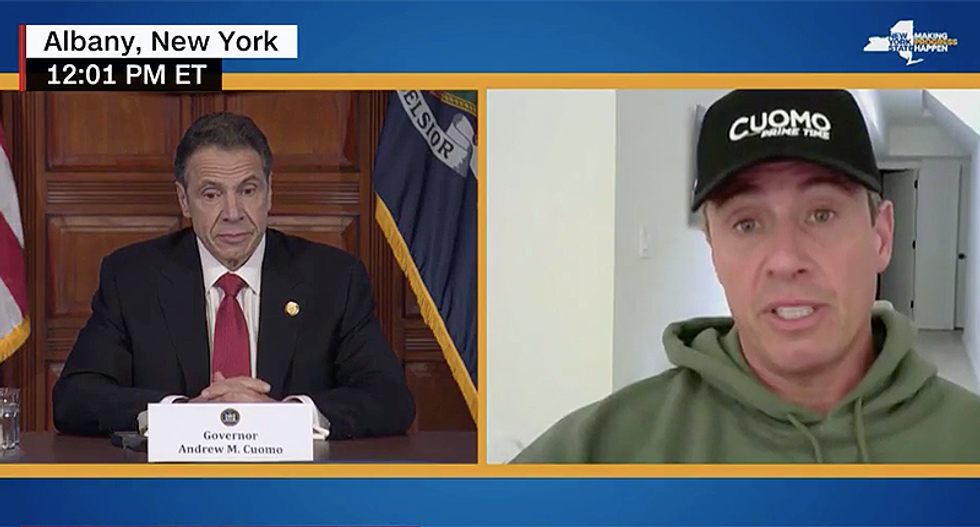 Gov. Andrew Cuomo (D-NY) welcomed his brother, CNN host Chris Cuomo, to the Thursday press conference to discuss the impact the virus has had on him.

The younger Cuomo brother explained that the high fever (over 103) is causing him “rigors” that made him chip a tooth because he was shaking so much. But overnight on Wednesday, Cuomo said he had a hallucination of the governor appearing to him in a ballet costume saying he wished he could magically banish the virus. He then waved a wand and danced away.

"Obviously the fever is effecting your mental capacity," the governor said with a wry tone.

"I get it now," the CNN host explained, noting how tough it is. He said that he didn't take it as seriously early on, and assumed that because he's in great shape and is healthy the virus wouldn't impact him the way it does with the elderly. But the opposite is true.

He said that since contracting it, people who have also had it are reaching out to him, in a kind of movement to explain to people how serious the virus is.

The younger Cuomo joked that the virus is having a serious impact on his hair.

"You look like you've been cutting your own hair," he said to the governor.

Chris also said that he is lucky he has a family who is distancing themselves from him, but are still able to help by leaving him food or medicine at the door to the basement where he's sequestered.

"A lot of people are fighting this alone and I can't imagine that. I can barely keep it together and I have people doing everything for me. There are a lot of people in a very bad way and they're reaching out to me and I feel for them," Chris said. "We're in a real fight and we really do have to remember our connections to each other because there'd be no other way through."