WATCH: Trump says he was being ‘sarcastic’ when he suggested testing an ‘injection’ of disinfectant to cure coronavirus 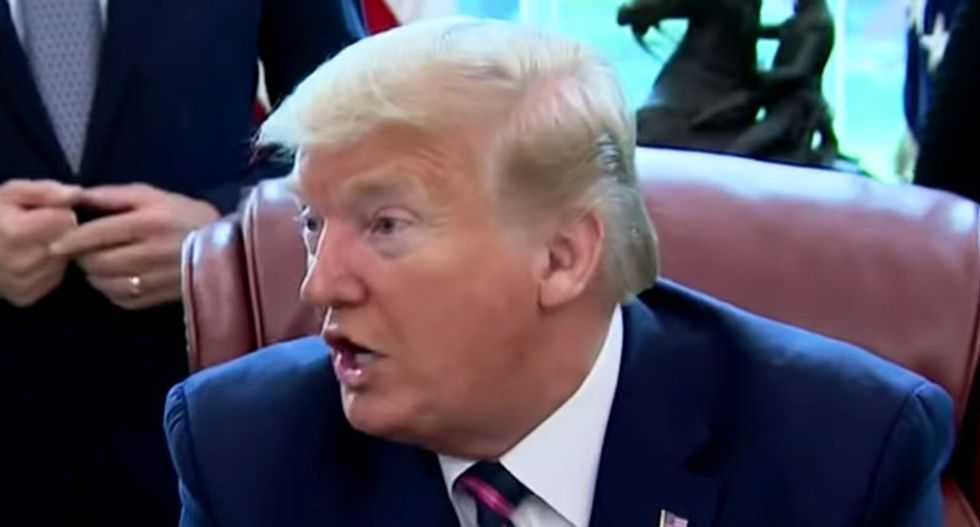 President Donald Trump was challenged Friday on his stunning – and stunningly dangerous – comments suggesting doctors test injecting disinfectant into the human body to try to cure COVID-19, the disease caused by the new novel coronavirus.

“Nah, I was asking a question sarcastically to reporters just like you to see what would happen,” Trump claimed, responding to a reporter who asked him to explain his remarks that lit up on social media.

“I was asking a sarcastic, and a very sarcastic question, to the reporters in the room about disinfectant on the inside. But it does kill it,” Trump said, not mentioning that any injection of a disinfectant also would kill the human being receiving the injection.

“That was done in the form of a sarcastic question to the reporters,” he concluded.

Trump’s remarks were viewed as so dangerous that the makers of the 131-year old brand Lysol quickly issued a statement warning that “under no circumstance” should disinfectant ever be injected in to the body.

Meanwhile, despite nation-wide outrage, the president’s new press secretary waited until late Friday morning to issue a statement attempting to downplay his dangerous remarks. That statement varies from the president’s remarks to reporters a few minutes ago, that he was just being sarcastic.

Kayleigh McEnany falsely claimed the media “irresponsibly” took Trump “out of context,” and said: “President Trump has repeatedly said that Americans should consult with medical doctors regarding coronavirus treatment, a point that he emphasized again during yesterday’s briefing.”

On social media, top trending topics all day have been terms including “Lysol,” “#InjectDisinfectant,” “#DontDrinkBleach,” “disinfectant,” and “Trump.”