West Point instructor: 'About 60 percent’ of cadets planning to attend Trump's commencement speech might be infected 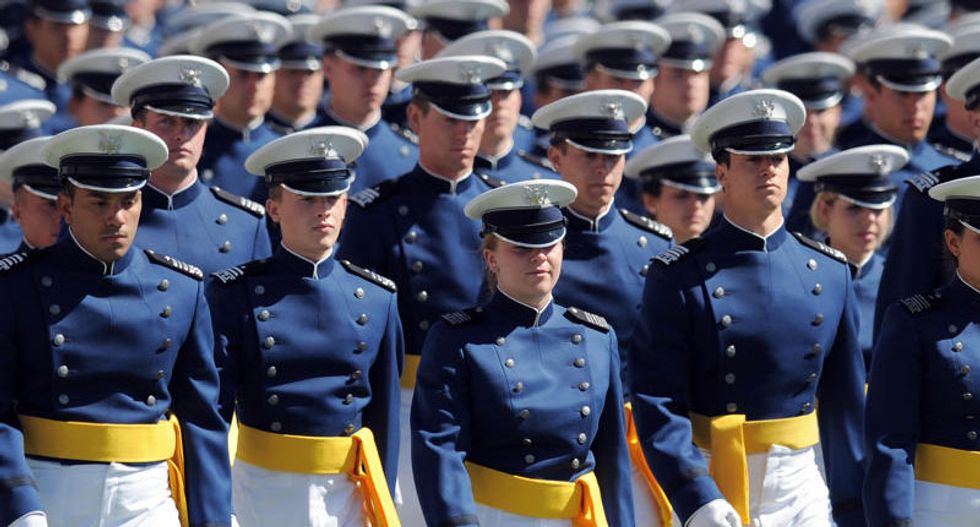 Air Force Academy Cadets walk onto the field at the start of the graduation ceremony for the US Air Force Academy at Falcon Stadium on May 23, 2012 in Colorado Springs, Colorado. (AFP Photo/Chris Schneider)

The recent outbreak of coronavirus on board the USS Theodore Roosevelt — a warship in the Pacific — underscores the threat that the pandemic poses to the United States military. And a West Point instructor, according to the Washington Post, fears that “about 60%” of cadets who are planning to attend President Donald Trump’s commencement speech in June might have been infected with COVID-19.

The Post has obtained audio from an April 21 video call in which the instructor can be heard saying, “Because all 1000 of you are going to be coming back, you’re probably going to be about 60% who have coronavirus. So, we’re going to likely test all of you.”

The instructor strongly recommended the type of extensive testing that was conducted for USS Theodore Roosevelt crew members. The U.S. Navy tested all of the crew members, and more than 840 tested positive for coronavirus — including Capt. Brett Crozier, the warship’s former commander.

Trump’s commencement speech is scheduled for June 13, and Business Insider’s Kayla Epstein notes that the event will “require 1000 graduates” of West Point “to travel back to the New York-area campus in the middle of a pandemic.”

“Like so many schools around the country,” Epstein reports, “West Point’s graduation was initially postponed. But on April 17, Trump announced he would go ahead with delivering the address.”