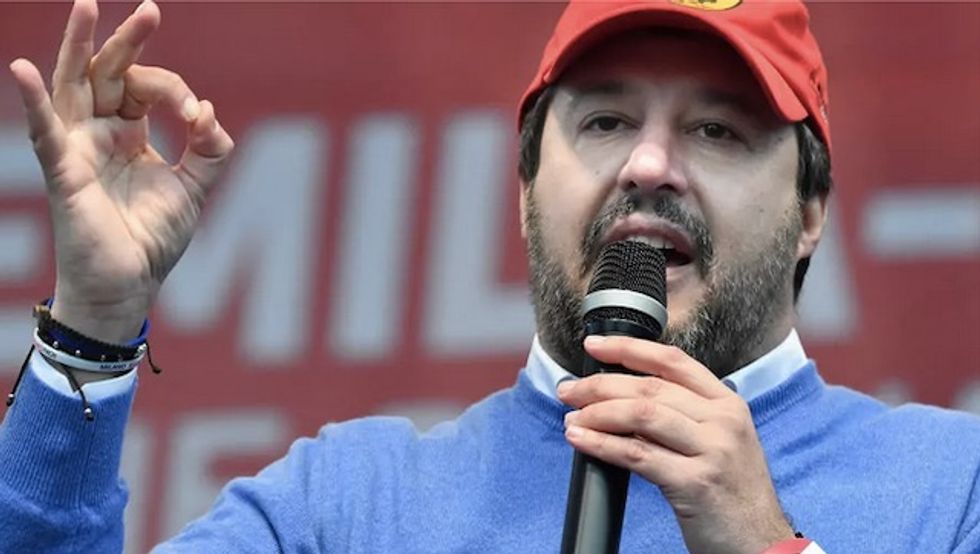 Italy is staring down the barrel of the worst recession since World War II, which could bolster the far-right and damage the country's love affair with the European Union, analysts say.

Much will depend on how Rome handles the easing of the national lockdown, how quickly it manages to get liquidity to suffering businesses, and how much solidarity it is seen to get from the EU at a key meeting next week.

The coronavirus emergency in Italy has fuelled not only national pride but also eurosceptic and populist narratives.

That brew could play right into the hands of Matteo Salvini, whose League party governed Italy in a coalition for a year until summer 2019 and who is determined to return quickly to power, to rule alone.

"The (economic) blow is going to be extremely hard, that's clear. But it can be merely extremely hard, or it can be exceptionally hard," Giovanni Orsina, professor of politics at Rome's LUISS University, told AFP.

"If people begin to suffer seriously, rage could spread throughout the country... at which point far-right propaganda becomes very effective", he said.

At the height of the health crisis, which has killed over 22,000 people and infected around 169,000, largely in the country's wealthy northern powerhouse, Italy's warring political parties called a temporary truce of sorts.

Prime Minister Giuseppe Conte's popularity shot up to a record high of around 63 percent, polls showed.

But as preparations for relaunching parts of the economy begin, cracks have emerged in the already fragile ruling coalition, made up of the centre-left Democratic Party and anti-establishment Five Stars Movement.

And opposition leader Salvini has resumed his virulent attacks on the government, along with Giorgia Meloni, head of the small far-right Brothers of Italy party, which has been enjoying a sharp rise in popularity.

Bitter spats have broken out over the length of the economically-crippling lockdown, which has been extended by Conte and is currently due to be lifted on May 4, after a near two-month stoppage.

Millions of Italians are either furloughed or have lost their jobs, and the northern regions -- League strongholds -- are champing at the bit to re-open.

A delay in shutting several virus hotspots in the Lombardy region, home to the financial capital Milan, allowed the virus to spread and has sparked a row between the government and League -- with each blaming the other for failing to act.

The anti-populist, youth-driven Sardines movement -- founded last year to try and stop Salvini's rise -- is one of many left-wing voices calling on Conte to put the region under special commission for woeful crisis management.

The economic fallout forecast is mind-boggling. The International Monetary Fund expects Italy's economy to shrink by 9.1 percent in 2020 -- the worst peacetime decline in nearly a century.

The Confindustria big business lobby has said every week of the shutdown chops another 0.75 percent off GDP.

Yet Conte has hesitated over entering the so-called "Phase Two", the easing of the lockdown, amid advice from top scientists that the epidemic could flare up again, forcing him to shut down the country a second time.

He is banking on help from the EU to weather the storm.

Eurogroup finance ministers have approved a 500-billion-euro rescue package to help European countries hit hard by the pandemic -- but some Italians fear that the cross-border solidarity will come with strings attached.

The ministers have so far refused to counter a proposal from Italy, Spain, and France for a joint borrowing instrument, dubbed a "coronabond", that would have raised money towards a recovery after the outbreak.

The bonds could reduce Italy's borrowing costs, but northern nations say they unfairly help countries that had been spending beyond their means for years.

That has incensed many Italians.

Italy also felt abandoned at the start of the crisis, with European countries reluctant to share much-needed medical supplies, for which the EU Commission president offered a "heartfelt apology" this week.

A Tecne poll from April 9 and 10 found the share of Italians that would vote to leave the EU in a referendum was up by 20 percentage points to 49 percent, compared to a previous poll from the end of 2018.

Rome is reluctant to use the rescue plan, which includes loans from the financial-crisis-era European Stability Mechanism (ESM), despite an easing of the tough economic and fiscal reform usually tied to it as requirements.

The ESM evokes bad memories of Brussels dictating policy to bailed-out Greece, and Salvini and Meloni have both said Conte would be stripping Italy of its sovereignty if he uses it.

They also complain Italy is being offered a fraction of the money it pours into the EU, and will have to pay interest.

"It's stealing," Salvini said, sneering at the suggestion Italy had got a good deal in terms of the reduced conditions.

Meloni said using the mechanism was "worthy of a totalitarian regime" and "a democratic point of no return".

The government hopes it will score an important win on the question of joint bonds to finance reconstruction at a videoconference meeting of EU leaders next Thursday -- perhaps allowing it to avoid using the ESM.

Former Italian prime minister Enrico Letta implored Brussels, Berlin and Paris "not to underestimate... growing euro-frustration" among Italians. It would be "a big mistake", he tweeted.

Conte's problems are not limited to the far-right.

While the PD is in favour of using the ESM, part of the Five Stars Movement is stridently opposed, with party leader Vito Crimi saying in an interview on Wednesday that Conte's premiership was at risk over it.

Analysts say the PM is gambling on getting more attractive aid from the EU if he drags his feet over the ESM.

Conte said Wednesday no decision would be taken before the exact conditions are drawn up and can be studied by parliament. Italy has said it will use other resources on offer from the EU, such as unemployment support.

But it was not clear his assurance would soften the rumblings of discontent inside and outside the government.

According to political analyst Stefano Folli, a fracture like the one currently dividing the ruling majority "would usually have already toppled the government".

Conte has appeared "increasingly muddled" over the past couple of weeks, and his opponents were being given ammunition by his "mediocre handling of the emergency," he wrote in the Repubblica daily on Tuesday.

The PM has been accused of avoiding difficult decisions on lifting the lockdown by simply extending it.

He has called on Italians to be patient, saying financial aid was coming. But there are real fears that widespread job losses, poverty, homelessness and hunger could spark social unrest -- and a revolt against the government.

Media reports have flagged a rise in domestic abuse and suicides as quarantined families snap under the strain.

Italy's interior minister has put the police on alert. Particular attention will be paid to the poorer regions south of Rome, where the lockdown is costing some 10 billion euros a month in lost productivity, according to the SVIMEZ association.

Anger is rising there that an area already dogged with high unemployment has not been allowed to leave the lockdown early, despite having relatively few virus cases.

"If you have a very, very troubled country, you cannot have Salvini and Meloni fanning the flames," LUISS University's Orsina said.

"You risk serious trouble: very bad polling numbers for the government, people protesting in the streets, people stealing in supermarkets, a furious country," he said.

Orsina said Conte's only option at that point would be to bring Salvini's League and Meloni's Brothers of Italy party into a new, national unity government -- though it would be "an extremely complex operation".

"I don't think Conte is likely to be able to carry on" as things are, Orsina said.

Not all are as pessimistic.

The Stampa daily's commentator Ugo Magri said Salvini or Meloni were unlikely to go for Conte's jugular now, largely because they would be blamed if the manouevre slowed or hampered the easing of the lockdown.

"Conte will be politically untouchable throughout 'Phase 2', so until the autumn," he wrote.

And while fellow analyst Massimo Franco thought Italy's anti-European forces could prevail in the short term, he told AFP he believed Italians would soon realise their connection with Europe "is increasingly necessary and important".

"Problems like pandemics need a supranational effort. And Europe, in spite of everything, is doing what it can for Italy", he said.