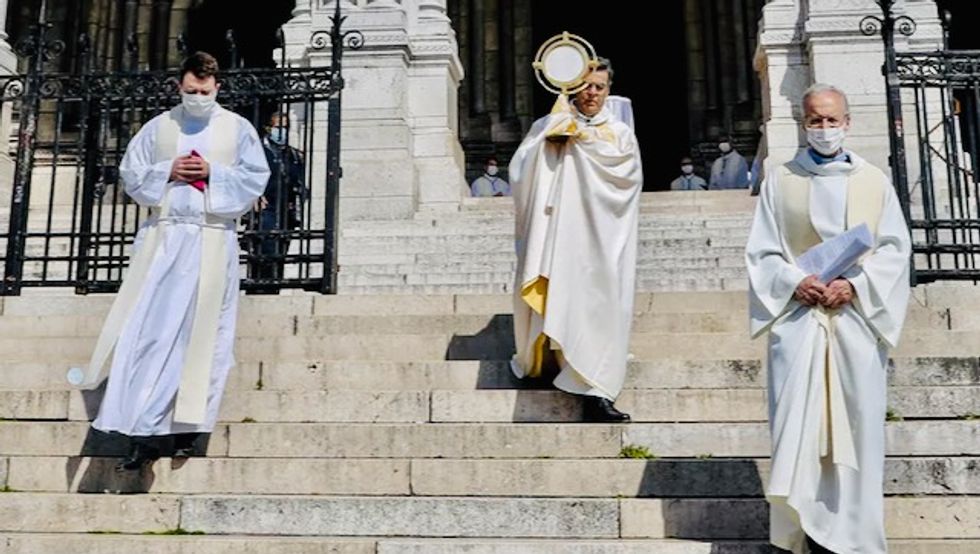 World powers scrambled on Thursday to build a global response to the human tragedy and once-in-a-century economic catastrophe caused by the coronavirus epidemic, as death tolls in the US and Europe soared higher.

In a locked-down New York, the UN Security Council was to meet on the pandemic for the first time. And, by video conference, EU finance ministers were wrangling over how to bail out their worst hit members Italy and Spain.

"We anticipate the worst economic fallout since the Great Depression," said International Monetary Fund chief Kristalina Georgieva, warning that all but a handful of countries will see incomes fall and urging governments to provide "lifelines" to businesses and households alike.

On the spiritual front, Pope Francis was preparing to celebrate Maundy Thursday with The Mass of the Lord's Supper, but he was to be unable to perform the tradition of washing the feet of the faithful in case of infection.

AFP / Philip FONG Japan's Prime Minister Shinzo Abe has declared a month-long state of emergency in Tokyo, but there and elsewhere the economic slowdown is starting to bite

And Iran's supreme leader Ayatollah Ali Khamenei warned Muslim worshippers to pray at home rather than in crowded mosques, even when the holy month of Ramadan begins later this month.

Meanwhile, the number of worldwide cases of the novel coronavirus since it spread from China earlier this year topped 1.5 million, according to an AFP tally. More than 88,981 people have died.

Alongside the personal tragedies and the pressure on overburdened hospitals, there has been a stark economic toll, with the World Trade Organization warning of the "worst recession of our lifetimes."

The worst-hit countries in Europe -- the worst hit continent -- are Italy and Spain, where daily death tolls are now down from their peaks but still running high, despite strict lockdowns.

AFP / Bryan R. Smith Rows of beds separated by black fabric are set up as a temporary field hospital for COVID-19 patients at the USTA Billie Jean King tennis center in New York

In Italy, the country's youngest COVID-19 patient, a two-month-old baby girl, was reportedly released from hospital, a bright moment of hope in a country with 17,669 dead.

Madrid and Rome are seeking assistance from EU partners to rebuild their economies in the wake of the disaster, but Germany has rejected the idea of joint borrowing and the Netherlands is blocking a compromise solution.

EU finance ministers were to meet later Thursday by videoconference for the second late-night crisis talks of the week to try to agree terms to allow hard-hit members to access funds.

"If we do not seize the opportunity to put new life into the European project, the risk of failure is real," Italian prime minister Giuseppe Conte told the BBC, suggesting the very future of the EU was at stake.

AFP / Gal ROMA A chart showing the additional number of people living below $5.50 a day due to a drop in income

Christine Lagarde, the head of the European Central Bank, said it was "vital" that ministers hatch a plan big enough to meet the challenge, warning: "If not all countries are cured, the others will suffer."

European companies are also suffering under a public lockdown, which health experts say is vital to slow the virus' spread but has effectively frozen economic life.

In one example, German airline Lufthansa warned it was losing one million euros ($1.08 million) an hour and would need state aid.

The coronavirus slump has also exacerbated the instability in world energy markets, and on Thursday top oil producers from OPEC like Saudi Arabia and its OPEC+ partners, including Russia, met to discuss cutting production to boost prices.

The virus has travelled around the whole world, and confined more than a third of humanity to their homes, but there has been a marked lack of international solidarity.

Thursday's videoconference meeting of the UN Security Council will be the first on the crisis since it began.

AFP / CRISTINA QUICLER A woman walks past a church in Seville, adorned with flowers and candles left by the faithful after Easter processions were cancelled

Led by Germany, nine of the council's 10 non-permanent members requested the closed-door meeting last week, fed up with the body's inaction over the unprecedented global crisis.

Talks are moving in the right direction, diplomats said, and Washington is no longer insisting UN language refer to the virus as coming from China, which had infuriated Beijing.

Despite the pandemic's origins, the United States is now the country hardest hit and UN host city New York is now America's most infected. On Wednesday, for the second straight day, the US recorded nearly 2,000 deaths.

There has also been a week of record tolls in Britain, where Prime Minister Boris Johnson spent a fourth night in intensive care, his condition said to be improving.

"The prime minister had a good night and continues to improve in intensive care at St Thomas' Hospital. He's in good spirits," a Downing Street spokesman said.

AFP / Simon MALFATTO The official number of deaths linked to the coronavirus around the world, as of April 9 at 1100 GMT

And the pandemic is marching into areas previously only lightly affected: in Africa, Ethiopia declared a state of emergency and Liberia said it was locking down its capital Monrovia.

The continent also faces vast economic damage, with the World Bank warning that sub-Saharan Africa could slip into its first recession in a quarter of a century.

At the global level, the World Health Organization and US President Donald Trump are embroiled in an ugly war of words, with Trump accusing the UN body of "blowing it" and of being too close to China.

WHO chief Tedros Adhanom Ghebreyesus urged unity at a time of global crisis, saying: "If you don't want many more body bags, then you refrain from politicising it."