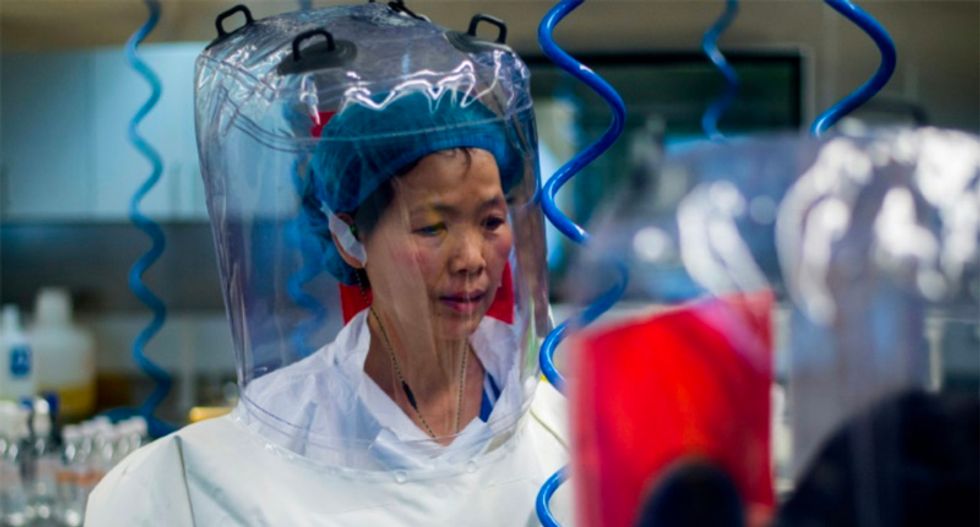 A laboratory in the Chinese city at ground zero of the global coronavirus outbreak has rejected as "impossible" US theories it is the cradle of the pandemic, as President Donald Trump warned Beijing of consequences if it was "knowingly responsible".

The denial came as the world's top musicians -- from the Rolling Stones to Taylor Swift, Stevie Wonder and teen superstar Billie Eilish -- joined forces for a virtual mega-concert, hoping to spread cheer to billions under lockdown.

The six-hour online event aimed to cultivate a sense of community during a pandemic that has ravaged the global economy and killed at least 157,000 people worldwide, with nearly 2.3 million confirmed infections.

"Was it a mistake that got out of control or was it done deliberately?" Trump said at a White House briefing Saturday, questioning the origins of the disease, which first emerged in the city of Wuhan in December.

"If they were knowingly responsible, yeah, then there should be consequences," he said when asked if China should face repercussions for the pandemic.

The highly contagious disease was likely first transmitted to humans at a market where exotic animals were slaughtered, according to Chinese scientists.

But conspiracy theories that the virus came from a maximum-security virology lab have been brought into the mainstream in recent days by US government officials.

AFP / Alberto PIZZOLI At least 157,000 people have been killed by the disease with two-thirds of the deaths in Europe

Secretary of State Mike Pompeo said an investigation was underway into how the virus "got out into the world".

"There's no way this virus came from us," Yuan Zhiming, the head of the P4 laboratory at the Wuhan Institute of Virology, which is equipped to handle dangerous viruses, said in an interview with state media.

"I know it's impossible," he added.

The US has the highest caseload of any country, with more than 735,000 confirmed infections, and by Sunday had lost 39,000 people to the virus, according to a tally from Johns Hopkins University.

Progress was marked in some places and New York state reported the lowest number of deaths in weeks, which Governor Andrew Cuomo attributed largely to social distancing.

But as Americans and others around the world chafe after weeks under stay-at-home orders, resentment is rising.

Anti-lockdown protests on Saturday drew hundreds of people at the capitols of states including Texas, Maryland, New Hampshire and Ohio. Many demonstrators waved American flags and some carried arms.

The small but spreading movement drew encouragement from Trump, who tweeted that three states should be "liberated" from the stay-home orders.

He has called for a rapid return to normality to limit damage to the US economy -- while largely leaving the final decision on easing lockdowns to state officials.

With 22 million Americans out of work seemingly overnight as businesses closed under the lockdown, families are turning more and more to food banks to get by.

"We have gone for months without work," a woman who gave her name only as Alana said at a food distribution centre in Chelsea in suburban Boston.

Mounting evidence suggests that social distancing has slowed the pandemic after more than half of humanity -- 4.5 billion people -- were confined to their homes.

Stay-at-home orders have been enforced in Italy and Spain, both still the hardest-hit countries in Europe, with death tolls over 20,000, followed by France, which has recorded more than 19,000 fatalities.

As governments around the world grapple with when and how to ease lockdowns, Spain on Saturday extended its nationwide shutdown to May 9.

Japan, Britain and Mexico have all expanded their movement restrictions.

Yet elsewhere, signs that the outbreak could be easing prompted Switzerland, Denmark and Finland to begin reopening shops and schools this week. Germany is set to follow suit with some shops back in action on Monday.

Iran also allowed some Tehran businesses to reopen Saturday despite the country being home to the Middle East's deadliest outbreak.

"How can I keep staying home? My family is hungry," said Hamdollah Mahmoudi, 45, a shopworker in Tehran's Grand Bazaar.

Israel has also approved some easing to its tight restrictions -- while pointedly avoiding announcing the first stage of an exit from lockdown.

Many of the world's 260 million Orthodox Christians marked Easter on Sunday without attending church services.

However Easter celebrations were allowed to go ahead in Georgia despite a nationwide curfew, with hundreds attending.

In Zimbabwe, mass rallies and military parades to mark the country's 40th anniversary of independence from British colonial rule were cancelled.

And Buckingham Palace announced that Queen Elizabeth II will not mark her birthday on Tuesday with a traditional gun salute.

Australia has called for an independent investigation into the global response to the pandemic, including the World Health Organization's handling of the crisis.

Its foreign minister said the country would "insist" on a review that would probe, in part, China's response to the outbreak.

Back in Wuhan there was an emotional return to the city for the Chinese Super League football team after more than three months stranded on the road while the area was on lockdown.

Wearing masks, the players had bouquets of flowers thrust into their hands as supporters clad in the team's orange colours held banners and sang to welcome them home.