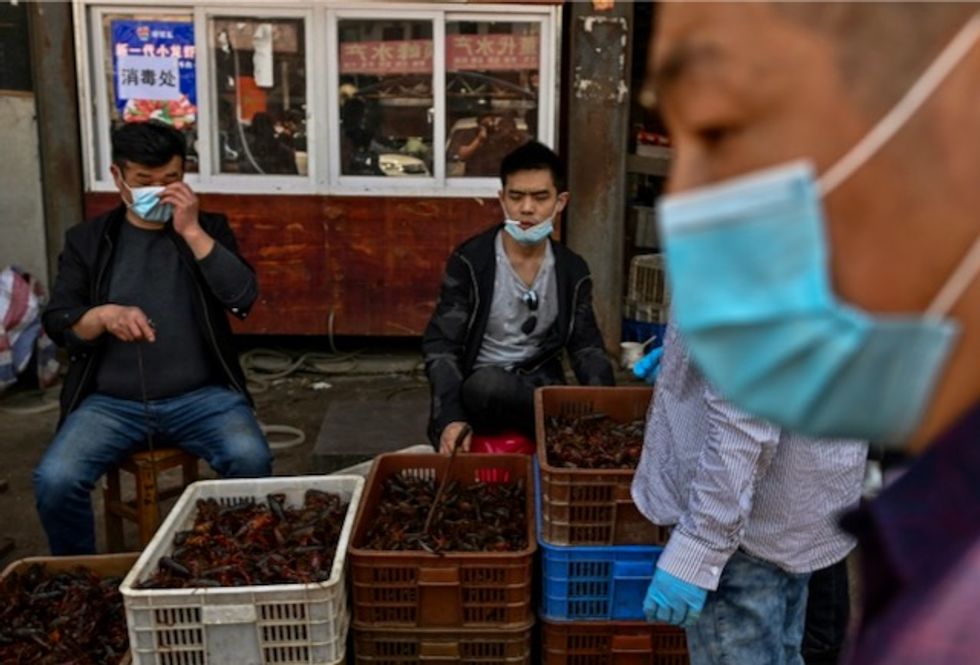 At a large food market in the Chinese city of Wuhan, signs forbid the selling of wild animals and live fowl, while announcements calling for "victory" over COVID-19 play on a loop from speakers.

China's "wet markets" have been slammed internationally as the coronavirus roils the world, with the disease having seemingly emerged from stalls selling live game in Wuhan late last year.

The government has since banned the sale of wildlife for food, but the reopening of markets has drawn criticism from around the world as the death toll from the pandemic continues to mount.

Shut down during the lengthy quarantine that sealed off Wuhan until April 8, the city's markets are now fighting for survival as customers have not been rushing back.

"There's no question, we're doomed this year," spice seller Yang, who runs a stall at the massive Baishazhou wholesale market, told AFP. "There have never been so few people at our market."

Yang, whose sales have fallen by a third from before the lockdown, dismissed criticism of markets as virus hotbeds as "unnecessary panic".

AFP / Hector RETAMAL Where it all began: the Huanan Seafood Market, where the new coronavirus is believed to have emerged, remains closed

One market remains closed: The Huanan Seafood Market that sold a range of exotic wildlife and is suspected to be the cradle of the virus that jumped from animals to humans.

Most don't sell live animals, although some do.

During visits to three Wuhan markets this week, AFP saw live turtles, frogs, fish and crustaceans for sale, but no fowl or mammals blamed for past diseases.

Workers at Baishazhou said they were now required to disinfect their stalls several times a day. Yang keeps multiple bottles of disinfectant in her small office, alongside a box of masks.

"We need to protect the world against potential sources of outbreaks of these types of viruses," he told Australian TV.

The top medical specialist for the US government, Anthony Fauci, told Fox News earlier this month that wet markets should be shut down "right away."

While the World Health Organization has said governments must ban the sale of exotic wildlife and enforce food safety regulations, it has not called for any wet markets to be closed.

Vendors at Wuhan's markets say unaffordable rents and the lingering effects of the citywide shutdown are more immediate concerns than the threat of contagion.

"Business is very bad," said Zhang Zhizhen, a duck meat seller at Lanling market. "It's because of the epidemic -- there are still very few people on the streets."

But at the city's Tiansheng market, two freshwater produce sellers who declined to give their names said they had to stop selling certain types of frogs and turtles because of the new rules.

"This definitely affects our income, but we have to overcome this. It can't be helped," one seller said.

Low foot traffic at the market, which has locked all but one entrance and only allows customers in after a temperature check, remains their main concern.

"We don't know if we can survive," the other seller said. "Do you see anyone here?"

Shoppers on the streets of Wuhan appeared unperturbed by criticisms of the city's wet markets as dirty and dangerous, instead citing convenience as the reason for choosing supermarkets instead.

One 40-year-old supermarket shopper surnamed Chen told AFP that she thinks the food at wet markets is "good and cheap."

She rejected criticism that China's markets are unhygienic, saying it "just isn't true."

"Their stuff is always fresh," she said.

People in China traditionally prefer buying fresh food -- as opposed to frozen or packaged food -- although supermarkets have been vying to steal away consumers in recent years.

In 2019, the majority of Chinese people said they preferred to shop at supermarkets compared to other types of food shops, according to Chinese research firm iiMedia.