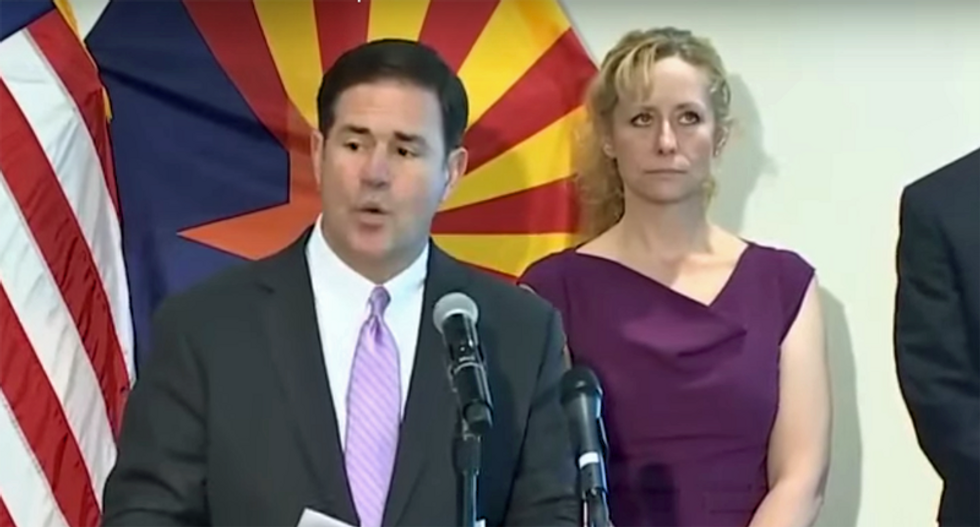 Some Republican governors have continued to emphasize the need for social distancing during the coronavirus pandemic, including Maryland’s Larry Hogan and Massachusetts’ Charlie Baker. But others are much more Trumpian in their outlook: Florida’s Ron DeSantis, Texas’ Greg Abbott and Arizona’s Doug Ducey are pushing for their states to reopen their economies sooner rather than later — and in a scathing May 6 op-ed for the Arizona Republic, journalist Laurie Roberts slams Ducey for ignoring scientists who are warning him against reopening Arizona prematurely.

“For seven weeks,” Roberts explains, “Gov. Doug Ducey has assured us that his decisions to reopen the state would be based not on politics or wishful thinking or even a wing and a prayer. Data, he has said over and over again, would be in the drivers’ seat when it comes to steering Arizona through the coronavirus. Now, Ducey has tossed a significant piece of that data — public health models that predict we could be headed toward disaster — out the window.”

Roberts goes on to explain that on Monday, May 4 — after Ducey announced his plans to accelerate the reopening of Arizona’s economy — “state health officials told a team of university experts to stop working on models that project what will happen next. The universities’ models had shown that the only way to avoid a dramatic spike in cases was to delay reopening the state until the end of May. Instead, Ducey will rely on a federal model — one we aren’t allowed to even see.”

Roberts notes that Ducey recently extended his stay-at-home order for Arizona to May 15, but when Trump and other Republicans pushed for ending shutdowns in the U.S. sooner rather than later, he “began to undo this.”

“Ducey, on Monday, decreed that barber shops and hair salons could reopen on Friday, (May 8) and restaurants on May 11,” Roberts observes. “The stay-at-home order is expected to end next week.”

One of the scientists Ducey is ignoring is Tim Lant, a mathematical epidemiologist at Arizona State University. On April 22, Lant told the Arizona Republic, “I can say, scientifically, no, it’s not safe to reopen unless you’re planning on, you know, shutting down again after a couple of weeks.”

“Shortly after Ducey’s Monday announcement that he’s reopening parts of the economy,” Roberts writes, Lant and his team were notified that “their services are no longer needed — and not only that, but they’ll be cut off from access to state data they need to continue their modeling.”

Not all Arizona politicians are on board with Ducey’s desire to reopening the state prematurely. Arizona Sen. Kyrsten Sinema, a centrist Democrat, reaffirmed her commitment to social distancing this week and has been critical of Ducey. Sinema, on May 6, tweeted, “To reopen strong, we must be safe and smart. For now, that means continuing to social distance and stay home — as well as increasing testing and infection-tracking.”

To re-open strong, we must be safe and smart. For now, that means continuing to social distance and stay home - as… https://t.co/ZkHSnL6iXh
— Kyrsten Sinema (@Kyrsten Sinema)1588800600.0

Roberts concludes her op-ed on a biting note, stressing that Ducey’s actions are based on what is politically expedient — not on the best interests or health of Arizona residents.

“He’s got a president up for re-election who desperately wants to reopen the country, a party that is leaning on him to reopen the state and a team of university scientists who are cautioning him to go slow,” Roberts says of Arizona’s Republican governor. “Guess which one landed in the ditch this week?”