As Trump claims US has best Covid-19 testing in the world, Capitol physician says he lacks capacity to test all 100 senators 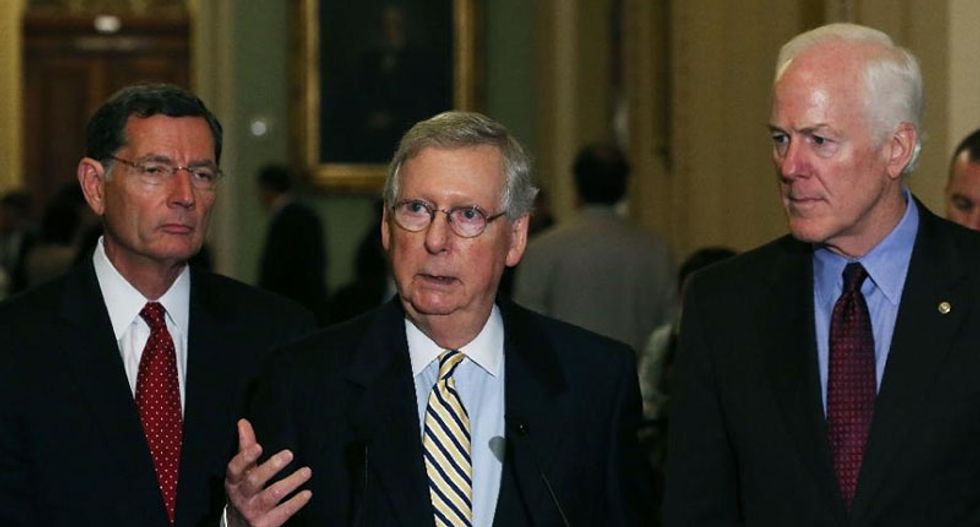 "So, we have all the great, perfect tests we need, millions of them, no one is complaining and if they do they're lying... But we can't do 100 tests of U.S. senators all at once."

As President Donald Trump continues to falsely claim that the U.S. has the most effective Covid-19 screening system in the world, the Capitol physician told top Republican staffers Thursday that he lacks sufficient equipment to quickly test all 100 senators for the deadly virus as Republican Majority Leader Mitch McConnell pushes ahead with a plan to reconvene the chamber next week.

"If there's no capacity to test 100 senators in a day, what hope do the rest of us have?"

"We don't have the capability to do a large-scale test," Dr. Brian Monahan said in a conference call with GOP officials, according to Axios.

"My test result can take between two and seven business days to resolve," said Monahan, who noted that he doesn't have access to the rapid tests used by the White House to test the president, vice president, and other executive branch officials.

Monahan told Republican officials that he will only be able to test senators and staffers who are showing symptoms.

The conference call came as McConnell appears dead-set on bringing the Senate back to Washington, D.C. on Monday for the sole purpose of confirming more of President Donald Trump's right-wing judicial nominees.

Democratic senators accused the Kentucky Republican of putting the health of lawmakers and Capitol employees at risk by reconvening the Senate for business completely unrelated to the coronavirus pandemic. The House of Representatives abandoned plans to return to Washington next week after Monahan warned it would be unsafe.

"McConnell is bringing back the Senate to confirm judges—judges, you read that right," tweeted Sen. Richard Blumenthal. "Not to provide real solutions to the nation's hardship and heartbreak. He's recklessly endangering Capitol workers and others for pure partisan politics."

Around half U.S. senators are 65 years of age or older, which—according to the Centers for Disease Control and Prevention—means they are at increased risk from the novel coronavirus.

"If there's no capacity to test 100 senators in a day," wrote Politico senior editor Ryan Heath, "what hope do the rest of us have?"