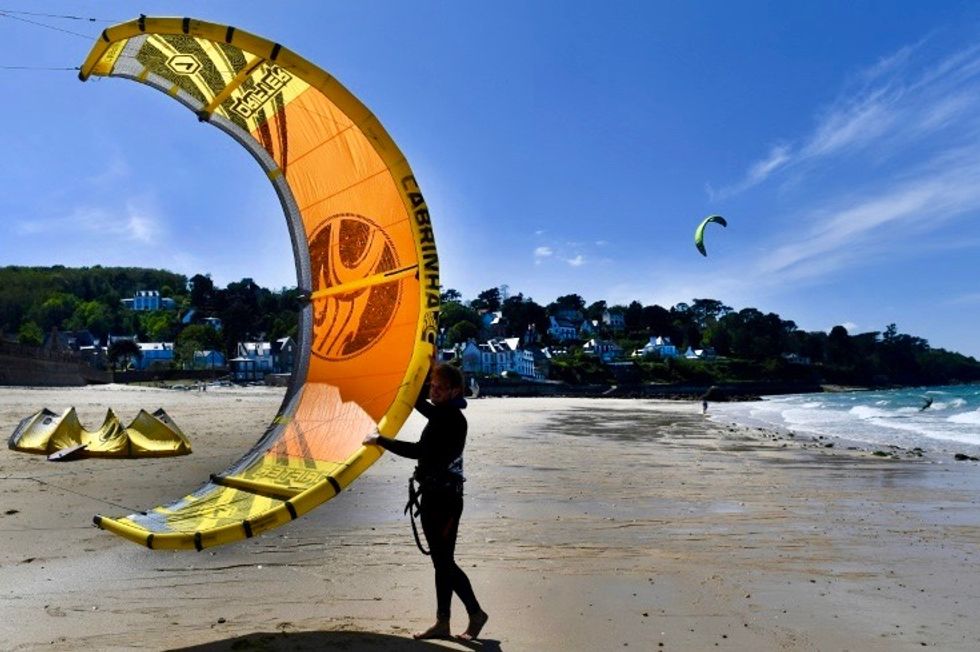 Beaches in France and Italy were open Saturday for the first weekend since the easing of coronavirus lockdowns while football fans awaited the return of major league action with Germany's Bundesliga set to kick off.

Italy also announced it will reopen to holidaymakers from June 3 and scrap quarantine requirements for arrivals, welcome news for the important tourism industry in one of the nations worst hit by COVID-19.

As some countries start to reopen despite fears of a second wave of the pandemic, President Donald Trump voiced hope that a vaccine would be available by late 2020.

"We are looking to get it by the end of the year if we can, maybe before," Trump told reporters at the White House Friday as he discussed America's "Operation Warp Speed" effort in the global race for a vaccine.

AFP / MANDEL NGAN US President Donald Trump, flanked by senior health officials, launches the high-powered 'Operation Warp Speed' initiative which he says could deliver a vaccine by the end of the year

The timeline -- deemed unrealistic by many experts -- is more aggressive than the one-year scenario put forward by European scientists.

The hunt for a vaccine for a disease that the World Health Organization (WHO) says may never disappear has also threatened to become a source of tension between the globe's haves and have-nots, with trials underway in various countries.

Many governments are not waiting, with borders and beaches reopening around Europe after two traumatic months in which life ground to a halt.

Germany, which this month began its slow emergence from confinement, was ready to kick off its top-flight football league Saturday, although in front of empty stadiums and under draconian health measures.

"The whole world will be looking at Germany, to see how we get it done," said Bayern Munich boss Hansi Flick.

"If we manage to ensure that the season continues, it will send a signal to all leagues."

Russia pushed ahead with plans to ease restrictions despite reporting more than 10,000 new cases, with its football league set to return next month and thousands of people being tested for antibodies to show whether they have had the virus or not.

World athletics chief Sebastian Coe also said it was crucial to get top events started again and warned that sports leaders may rebel and decide to resume even without the approval of local authorities.

"We will be respectful, but we have to make decisions in the best interest of our sport and our athletes," the British former track legend told Indian television channel WION.

Slovenia on Friday became the first European country to open its borders, despite new infections still being reported.

In northeast Europe, Latvia, Lithuania and Estonia were creating their own "Baltic bubble" allowing free movement among the three countries.

France called for self-restraint as the country prepared for its first weekend since easing its lockdown, warning that police would break up any large gatherings.

Several nations have eased restrictions to stem the economic damage from lockdowns.

With the European summer fast approaching, the key tourism industry is trying to salvage something from the wreckage.

Parasols and sunloungers are starting to appear on coastlines in Italy.

"It moves me to see these sunshades," said Simone Battistoni, whose family has been running the Bagno Milano beach concession in Cesenatico on Italy's east coast since 1927.

"We missed it and we're going to come back as much as possible," said Fanny and Sophie, 19-year-old students waiting for breakfast at a cafe in the Austrian capital.

Ireland will begin to lift its lockdown in coming days while introducing a 14-day quarantine period for new arrivals.

The pressure to ease lockdowns has mounted as the catastrophic economic effects of the virus have become clearer.

In the United States, the world's worst-affected country with more than 87,000 deaths and 1.4 million cases, industrial production plunged 11.2 percent in April, the largest drop in a century.

AFP / FRANCK FIFE France is one of the European countries to ease its coronavirus lockdown, but the government has called for self-restraint

Department store JCPenney, a retail institution which has not turned a profit since 2011, on Friday became the latest US business to file for bankruptcy.

"May will not be a month of celebration. Nor will June. Nor July. Nor probably the rest of this year," warned Neil Saunders, managing director of GlobalData Retail.

With 36.5 million Americans -- more than 10 percent of the population -- now out of work, Trump has been keen to ease lockdown measures as he seeks re-election in November.

Some areas are resisting. Lockdown measures in New York City have been extended until May 28.

In the US House of Representatives, Democrats late Friday narrowly pushed through a $3 trillion rescue package to help American families and businesses stay afloat.

But its fate appears uncertain as Republicans have vowed to block it in the Senate which they control.

The new coronavirus which first emerged in the Chinese city of Wuhan late last year has so far killed more than 306,000 people globally and infected 4.5 million as it continues to spread.

The WHO warned Africa could have 231 million people infected and up to 190,000 could die.

There was also concern over the "nightmare scenario" of the discovery of infections in the world's biggest refugee camp, in Bangladesh, where upwards of a million Rohingya Muslims from neighbouring Myanmar live in squalor.

Besides its health and economic toll, the pandemic has also caused political ructions.

The latest fallout was in Brazil which lost its second health minister in a month as Nelson Teich resigned Friday over what an official said was "incompatibility" with right-wing President Jair Bolsonaro's approach to fighting the country's spiralling COVID-19 crisis.