Before the COVID crisis Stephen Miller tried to use disease to block immigrants from the US: report 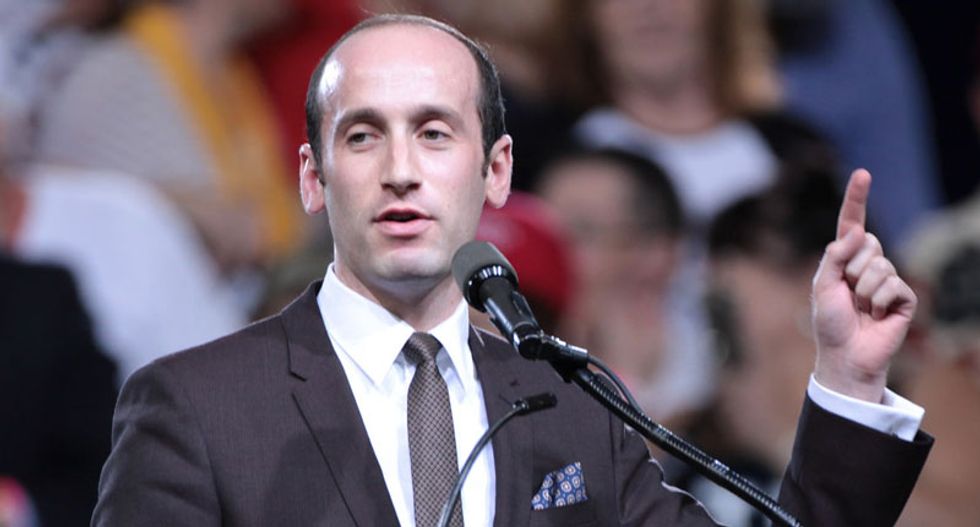 Long before the coronavirus crisis hit, top White House aide Stephen Miller was searching for ways to shut down the United States to immigrants using a disease as an excuse.

According to the New York Times, in the early days of the administration, Miller tried to use obscure laws that were meant to protect the U.S. from diseases to deny entry for migrants. It never worked, but that was before COVID-19.

"Mr. Miller pushed for invoking the president's broad public health powers in 2019 when an outbreak of mumps spread through immigration detention facilities in six states. He tried again that year when Border Patrol stations were hit with the flu," reported the Times. "When vast caravans of migrants surged toward the border in 2018, Mr. Miller looked for evidence that they carried illnesses. He asked for updates on American communities that received migrants to see if new disease was spreading there."

While detained migrants were locked in camps on the border, serious illnesses took down children under 10-years-old. Americans were horrified and demanded something be done to protect children in cages, but Miller tried to use it as an opportunity to seal the border.

"Within days of the confirmation of the first case in the United States, the White House shut American land borders to nonessential travel, closing the door to almost all migrants, including children and teenagers who arrived at the border with no parent or other adult guardian," said the report. "Other international travel restrictions were introduced, as well as a pause on green card processing at American consular offices, which Mr. Miller told conservative allies in a recent private phone call was only the first step in a broader plan to restrict legal immigration."

Invoking a public health emergency was on the "wish list" for Miller to restrict Miller, sources told the Times. Even a senior administration official at the White House confirmed the discussions.

"This is a public health order that we're operating under right now," said Mark Morgan, the acting commissioner of Customs and Border Protection. "This is not about immigration. What's transpiring right now is purely about infectious disease and public health."

Miller has argued that restricting immigration will protect jobs, but what has been discovered with the lockdown and stricter immigration is that farms that rely on immigrant labor are having trouble finding people. Critics have accused Miller of trying to find ways to target non-white immigrants. In previously leaked emails from his time before the White House, Miller quoted white nationalist sites and magazines and promoted ideas from such racist groups.

"The idea that immigrants carry infections into the country echoes a racist notion with a long history in the United States that associates minorities with disease," the report said.

Read the extensive report from the New York Times.