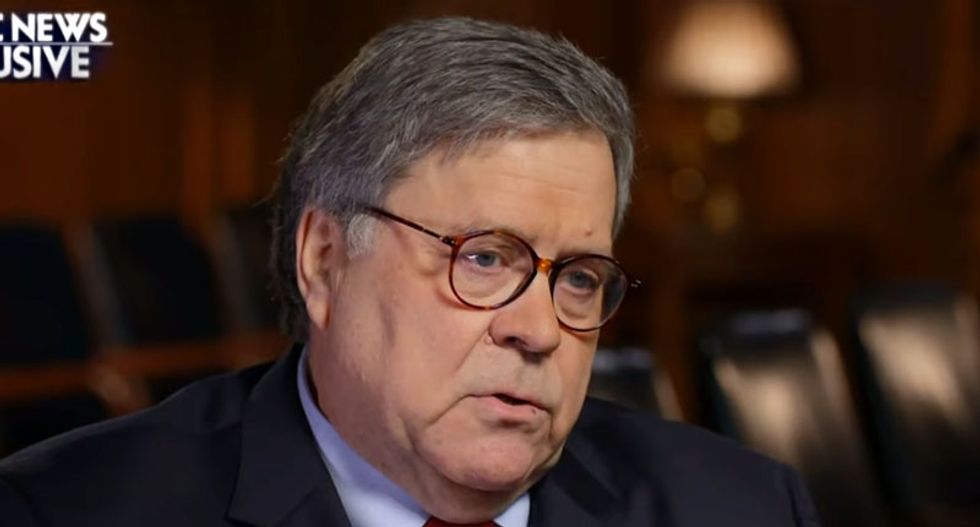 In the interview, Barr asserted without explanation that the counterintelligence investigation into Flynn, which led to criminal charges and became a part of Mueller's Russia investigation, was unjustified. And he discussed, as he has previously, that he has directed U.S. Attorney John Durham to examine the origins of the probe and its conduct in 2016 and 2017.

That's when interviewer Catherine Herridge — a former Fox News correspondent who largely tossed Barr softball questions — brought up the Steele dossier. It was an opposition research document from the 2016 campaign containing raw intelligence, including a series of wild allegations about Donald Trump and his associates. The question prompted Barr to sharply criticize Mueller:

HERRIDGE: Newly declassified footnotes in [Inspector General Michael] Horowitz' report suggest that the Steele dossier was likely the product of Russian disinformation. And there were multiple warnings to the FBI at that time, yet they continued to use that. How do you explain that?

BARR: I think that's one of the most troubling aspects of this whole thing. And, in fact, I said it in testimony on the Hill, I can't remember if it was my confirmation, that I said I was very concerned about the possibility that that dossier and Steele's activities were used as a vector for the Russians to inject disinformation into the political campaign.

I think that is something that Robert Mueller was responsible for looking at under his charter,  which is the potential of Russian influence. But I think it was ignored and there was mounting indications that this could very well have been happening and no one really stopped to look at it.

Barr's attack on Mueller, however, is largely frivolous. His claim that Steele's work was "used as a vector for the Russians to inject disinformation into the political campaign" is mostly wrong. With the exception of a Mother Jones article about Steele's reporting to the FBI published on Oct. 31, 2016, the dossier had little influence on the campaign — especially compared to the widespread campaigns on social media funded by Russian intelligence services and the Kremlin-directed hacking of Democratic emails.

As Horowitz has indicated, it does seem that Steele receives some disinformation from Russian sources, looking to either confuse him or potentially hurt Trump. But the Russia investigation began separately from Steele's reporting, and it sought to determine which allegations were true before bringing any charges. The dossier only became public after Trump's election. No charges were brought based on Steele's reporting.