Bob and Doug, the best friends on historic SpaceX-NASA mission 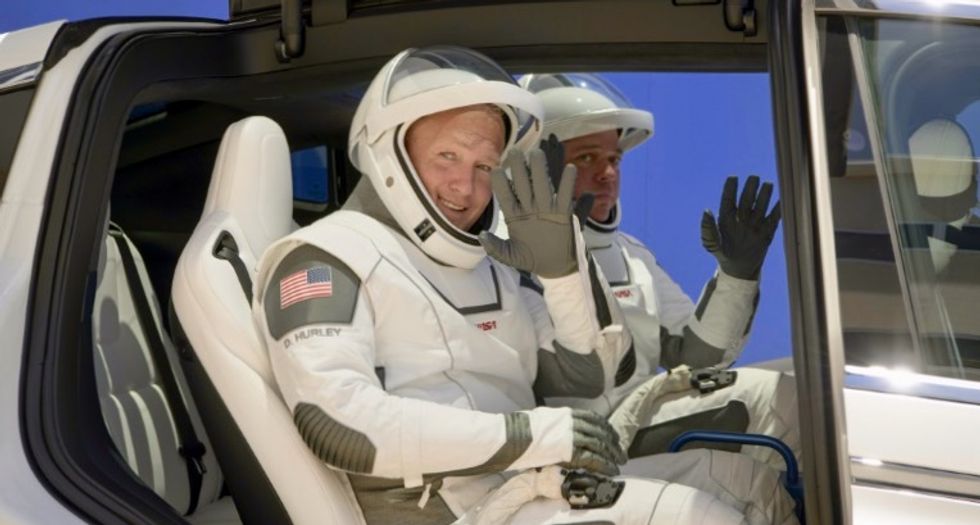 Robert Behnken and Douglas Hurley, the astronauts set to launch into orbit on a SpaceX rocket Wednesday, are both former military pilots, both recruited by NASA in 2000, and both married to fellow astronauts.

With their crew cuts, cool demeanor, short and precise sentences, they have all the traditional hallmarks of the men of NASA.

Smiling, reasonable, competent, reliable: in other words "The Right Stuff" of the early era of spaceflight.

They met in 2000 when they began their training at the space agency, and have been best friends ever since, said Hurley, 53.

Both of them attended military test pilot school, a well worn path to the astronaut corps.

Behnken, 49, holds a doctorate in mechanical engineering from the California Institute of Technology.

He signed up for the military during his studies and attended the elite Air Force Test Pilot School at Edwards Air Force Base in California.

A colonel, he's flown more than 25 different aircraft, including the F-22 fighter.

Hurley was also a colonel and before joining NASA was a fighter pilot and test pilot in the Marine Corps, a specialist for the F/A‐18.

Between 2008 and 2011, they both flew two missions, separately, on the Space Shuttle.

In 2015, NASA assigned them their next mission: the first crewed flight of the Crew Dragon, built by SpaceX and initially planned for 2017.

"If you gave us one thing that we could have put on our list of dream jobs that we would have gotten to have some day, it would have been to be aboard a new spacecraft and conduct a test mission," Behnken told reporters when he arrived at the Kennedy Space Center from Houston last week.

It was through the astronaut corps that each of them met their wives, who have also space missions to their credit.

Behnken married Megan McArthur, and they have a six-year-old boy, Theodore.

Doug married Karen Nyberg, and they too have a son, Jack, aged 10.

The bond of friendship that unites the two men is an obvious asset for such a risky mission, where they each might have to take control of the spacecraft that is set to auto pilot by default.

Hurley is the more meticulous, even obsessive, of the two, said Behnken.

"If we have to get useless information, Doug is always the repository for that," joked Behnken in a video released by NASA.

Hurley himself admitted to being an expert in "obscure procedures."

As for Behnken, Hurley said his friend thinks of everything ahead of time. "He's already got it all figured out."

But he's no good at bluffing and "doesn't have a good poker face," added Hurley.

On Monday, the head of NASA texted the pair to ask one last time: are you sure you want to go ahead?

"They both came back and they said, 'we're go for launch,'" said Jim Bridenstine. "So they're ready to go."

It's a moment they've been training for the past five years.