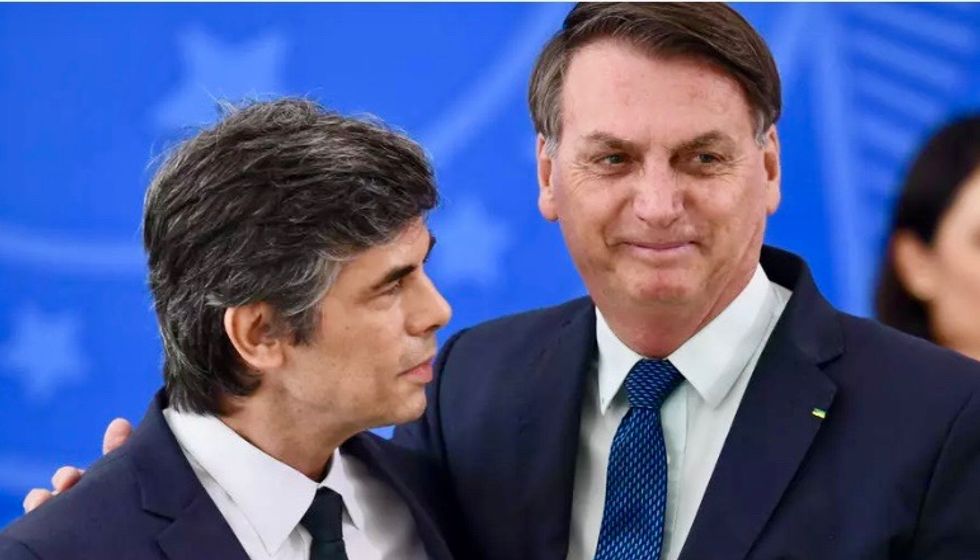 Brazilian Health Minister Nelson Teich resigned Friday after less than a month on the job over what an official said was "incompatibility" with President Jair Bolsonaro's approach to fighting the country's spiraling coronavirus crisis.

Mandetta had also clashed with the president, a vocal critic of the stay-at-home measures the then-minister recommended to contain the new coronavirus.

Teich took over the post promising "total alignment" with the president, but rifts soon emerged.

Teich and Bolsonaro "were incompatible on certain courses of action," a ministry source told AFP, speaking on condition of anonymity.

Teich was taken by surprise last week when Bolsonaro issued a decree without consulting him that declared beauty salons and gyms "essential services" exempt from business closures.

The final straw for Teich was reportedly a disagreement with Bolsonaro over using chloroquine to treat the virus.

Like US President Donald Trump, to whom he is often compared, Bolsonaro touts the drug as a promising treatment.

He wants it cleared for widespread use in patients, despite studies casting doubt on its effectiveness and raising concerns about its safety.

The health ministry announced Teich's resignation in a brief statement, saying he would hold a press conference later.

The news drew anti-Bolsonaro protests in various cities. Residents banged pots and pans out their windows, shouting "Get out, Bolsonaro!"

Brazil has emerged as one of the countries hit hardest in the pandemic, with a sharply rising death toll that has reached nearly 14,000.

The country has more than 200,000 confirmed cases.

Experts say under-testing means the real figures may be 15 times higher or more.

Bolsonaro has found himself increasingly isolated over his response to the pandemic.

He has compared the virus to a "little flu," condemned the "hysteria" surrounding it and repeatedly clashed with state and local authorities over their social distancing measures.

The president insists business closures and stay-at-home measures are unnecessarily wrecking the economy, which is on track to shrink 5.3 percent this year, according to the IMF.

Stymied by the Supreme Court, which ruled that states have the final say in deciding how to fight the pandemic, Bolsonaro called on top business leaders Thursday to "play rough" to win an end to the stay-at-home adopted in the country's industrial hub, Sao Paulo state.

"You have to call the governor (Joao Doria) and play rough, because this is serious, this is war," he told them in a video conference.

Bolsonaro, who took office in January 2019, is also embattled on another front after firing the chief of the federal police last month, leading to a probe into whether the president obstructed justice in a bid to protect himself or his family from ongoing investigations.

With talk of impeachment mounting in Brasilia, the inquiry could prove explosive.

It's like taking candy from a baby. Or leftover Chinese food from a garbage can; whatever metaphor works for you. Just play it cool. Don't pick any fights and don't make a lot of noise. If you really want to make it as a bandit in the big city, you've got to become the kind of raccoon nobody suspects.