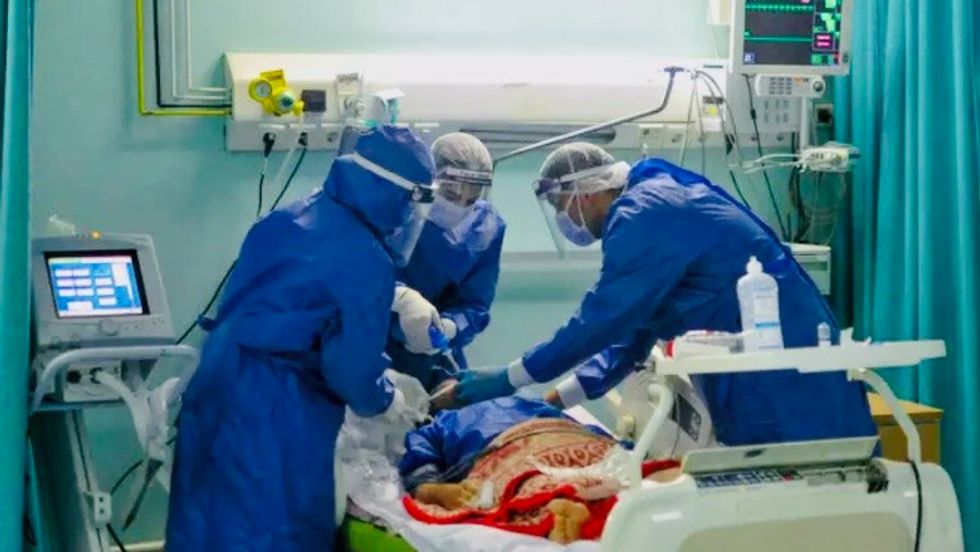 Egyptian medical staff intubate a patient in a coronavirus isolation ward at a Cairo hospital YAHYA DIWER AFP
Years before the nation's nursing homes experienced a heavy COVID-19 death toll, the Trump administration rolled back the federal rules and regulations put in place by the Obama administration aimed at improving infection control in these kinds of facilities.

In an October 2016 edition of the Federal Register, the Center for Medicare and Medicaid Services published rules and regulations requiring long term care facilities "to develop an Infection Prevention and Control Program that includes an Antibiotic Stewardship Program and designate at least one Infection Preventionist"

The Obama administration's efforts to improve infection control was just one facet of a comprehensive initiative to reassess an industry's rules and regulations, which had not been updated since 1991.

As part of the Affordable Care Act, the Obama administration aimed to use the leverage of billions of dollars paid out through Medicare and Medicaid to these facility operators to get them to be more accountable and, in the process, reduce the costs incurred from unnecessary recurring hospitalizations from avoidable infections.

It was long overdue.

In December of 2017, the Los Angeles Times published an eye- opening investigative report by Jordan Rau with Kaiser Health News that told us all we would have needed to know about just how vulnerable these facilities would be to COVID-19 in 2020.

"Basic steps to prevent infections — such as washing hands, isolating contagious patients and keeping ill nurses and aides from coming to work — are routinely ignored in the nation's nursing homes, endangering residents and spreading hazardous germs," Rau wrote in 2017. "A Kaiser Health News analysis of four years of federal inspection records shows 74% of nursing homes have been cited for lapses in infection control — more than for any other type of health violation."

And while citations were common, "disciplinary action such as fines is rare: Nationwide, only 1 of 75 homes found deficient in those four years has received a high-level citation that can result in a financial penalty," according to the Kaiser study.

Rau quoted Michael Connors of California Advocates for Nursing Home Reform, a nonprofit in San Francisco, who said the industry was "getting the message that they don't have to do anything" because they are only getting "low-level warnings year after year after year and the facilities have learned to ignore them."

As the New York Times reported on March 14, the "federal regulator overseeing nursing homes proposed the rule changes last summer, before the coronavirus pandemic highlighted the vulnerability of nursing homes to fast-spreading diseases. The push followed a spate of lobbying and campaign contributions by people in the nursing-home industry, according to public records and interviews."

Specifically, last summer the Center for Medicare and Medicaid Services, the same regulator that under Obama had tried to upgrade infection control "set in motion a plan to weaken rules… that required every nursing home to employ at least one specialist in preventing infections."

"In November, Mr. Trump was honored by a group of nursing home operators at a fund-raising event at a packed ballroom at the InterContinental hotel in Midtown Manhattan," the Times reported. "The event drummed up more than $3 million for his re-election campaign through a political action committee called America First Action."

Back in May of 2018, the roll back caught the attention of 17 of the nation's state Attorney Generals who wrote the Trump administration that the regulatory changes would "not only threaten the mental and physical security of some of the most vulnerable residents of our states" but short circuit their states' ability to criminally prosecute bad actors in the industry.

"The proposed regulatory roll-back comes at a time when the U.S. population is aging and in need of quality care in safe facilities," wrote the Attorneys General. "The number of people dependent on SNFs [skilled nursing facilities] for healthcare is growing: the population aged 65 and older is expected to double by 2060, and one in three people turning 65 will require nursing home care during their lives."

Even before the coronavirus pandemic killed off tens of thousands of older Americans in congregant living, it was already a system in crisis. In recent years, the industry beefed up its profits by exploiting low wage workers, primarily of color, who were often recent immigrants.

At the same time, the entire nursing home sector has struggled since the 1980s to find a sufficient supply of qualified nurses to handle the explosion in the number of long-term care patients whose chronic medical conditions required more attention.

The for-profit-healthcare system has, over the years, under-invested in basic public health and medical education such that we lack a sufficient number of nursing educators to train the near 1 million additional nurses we will need before the end of 2030.

"A 2018 survey by the American Association of Colleges of Nursing (AACN) found that 75,029 competent applicants were refused admittance to nursing schools due to a lack of enough faculty," Healthline.com reported. "The AACN reported nursing schools are struggling to fill faculty positions because a large number of current faculty members are on the verge of retirement, nurses tend to earn a higher salary in clinical and private-sector settings, and not enough nurses are choosing to continue their education."

The Bureau of Labor Statistics writes that the demand for registered nurses will grow by 12% by 2028, "compared to 7% growth across all occupations."

Thanks to an aging Baby Boomer population, "climbing rates of chronic issues like obesity and diabetes, and a growing emphasis on preventative care" by 2030, the number of registered nurses needed in the United States is estimated to skyrocket by 28.4% from 2.8 million to 3.6 million.

Tragically, it was the lack of staffing in the here and now, along with the lack of sufficient infection controls, that ended up killing tens of thousands of patients along with an untold number of healthcare professionals.

This pandemic's impact on our nursing homes was no black swan event. It is exactly the kind of thing that happens when your health care system is rooted in greed and scarcity enabled by a political class on the take.