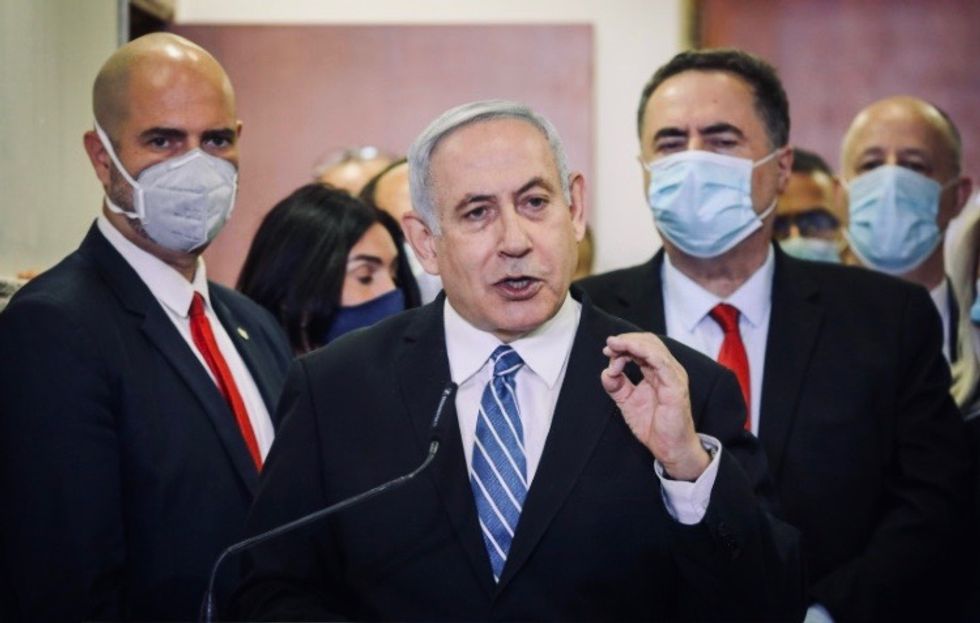 A combative Benjamin Netanyahu stood in court Sunday for the start of his long-anticipated corruption trial, after lashing out at the "fabricated" charges against him.

The veteran Israeli Prime Minister, who has just forged a new unity government after more than a year of political turmoil, is the country's first premier to face criminal charges while in office.

Flanked by ministers from his right-wing Likud party, Netanyahu addressed the public in a live Facebook broadcast before entering the Jerusalem District Court to face charges of bribery, fraud and breach of trust.

"I'm here with a straight back and my head held high," Netanyahu said, labelling the charges "fabricated and ludicrous".

The longest-serving prime minister in Israeli history has claimed to be the victim of a witch-hunt and again suggested the charges were trumped up to drive him from office.

"When you need to take me down, a strong prime minister from the right, everything is possible," he said.

The trial, officially called the State of Israel vs Benjamin Netanyahu, is expected to last for months, if not years.

During Sunday's session Netanyahu spoke only to identify himself and confirm he had read and understood the charges, with his lawyers spending most of the hour that the court was in session to request more time to study the case's material.

The judges set July 19 as the date for the next session, which will take place without Netanyahu, and deal with technical issues.

The prime minister will be asked to enter his plea during a later session.

"We'll continue to act fearlessly, even in the face of the ridiculous attempt to attribute invalid considerations to the prosecution, an attempt that should be firmly rejected," he said in a written statement following the court session.

AFP / Menahem KAHANA Israeli supporters hold flags and a poster depicting Prime Minister Benjamin Netanyahu alongside French officer Alfred Dreyfus, who was unjustly convicted of treason in 1895, during a rally outside the district court of Jerusalem

70-year-old Netanyahu was indicted in January after several years of police investigations.

Among the charges he faces is seeking to illegally trade favors in exchange for positive media coverage.

He is also accused of accepting cigars, champagne and jewelry worth 700,000 shekels (180,000 euros) from wealthy personalities in exchange for favors.

Wearing a facemask to limit the spread of the new coronavirus, like the judges and lawyers, Netanyahu sat silently through much of the court session, occasionally exchanging whispers and nods with his legal team.

His lawyers immediately argued they had not received timely access to all the relevant documents and requested a delay of several months to the next hearing.

Other defendants, including media moguls Shaul Elovitch and Arnon Mozes, both accused of seeking illegal deals with Netanyahu, were also in court.

Outside on the streets of Jerusalem, Netanyahu supporters and opponents gathered to raise their voices.

"I came to demonstrate against the accused prime minister who uses his power to destroy the foundations of democracy," said Yoav Eitan, 39, at a rally of around 800 people outside Netanyahu's residence.

Elsewhere, Mali, an elderly woman in a pro-Netanyanu protest of more than 200 people outside the courtroom, said "Benjamin Netanyahu is pure and clean. We will fight to ensure a just trial."

Among the most serious allegations against Netanyahu is the claim that he offered media mogul Elovitch regulatory changes worth millions of dollars to his telecom giant Bezeq in exchange for favorable reporting on the Walla! news website.

That charge is also the most complex, said Amir Fuchs, a researcher at the Israel Democracy Institute, who argued it differs from "classic" bribery cases where money changes hands.

In this case, Fuchs said, the allegation is that Netanyahu "is getting only media coverage" rather than cash.

"It is unprecedented," he told reporters.

"It was actually complete editorial control of this site even on the specifics of which posts to make, or which pictures."

When Mandelblit filed charges against the premier back in January, many commentators considered it the premier's political death warrant.

But he retained the Likud party leadership and won the most seats in a March general election.

After two inconclusive elections in a year, the third left him able to hammer out a power-sharing deal with his chief election rival Benny Gantz.

Under the agreement, Netanyahu will continue to lead the government for 18 months before handing over the premiership to Gantz.

Netanyahu's trial had been due to open in mid-March, but the COVID-19 pandemic led to a postponement.

Under Israeli law, a sitting prime minister does not have automatic immunity from prosecution but also is not obliged to resign when charged, only when convicted and after all avenues of appeal have been exhausted.