Covid-19: After conflicting studies, effectiveness of remdesivir still in question 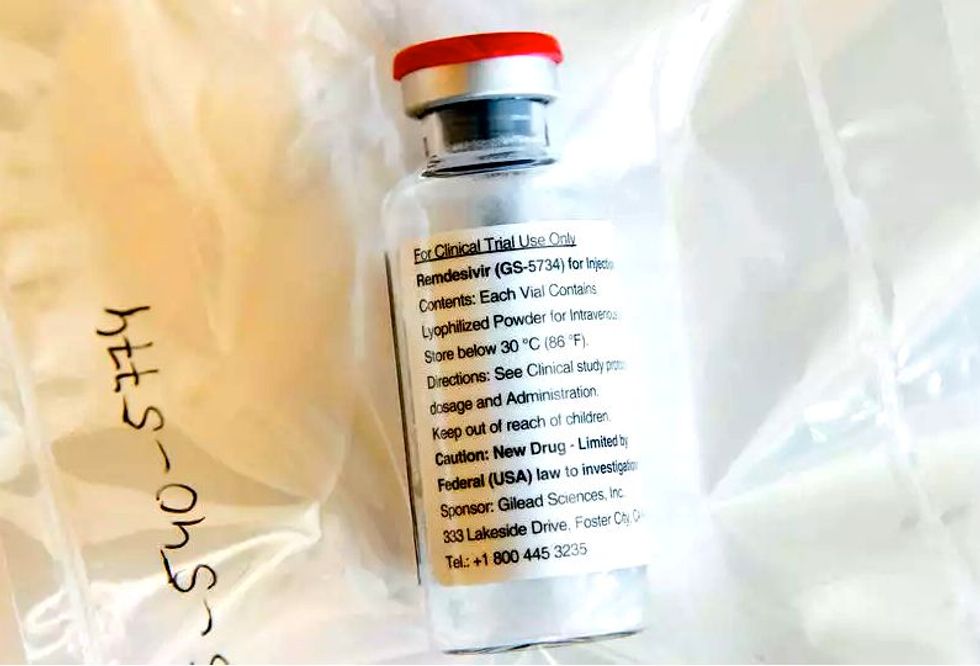 A US study published this week raised great hope for the effectiveness of the antiviral drug remdesivir for the treatment of patients with Covid-19. But results of a similar study in China seemed to show the opposite.

Dr Anthony Fauci, the director of the US National Institute of Allergy and Infectious Diseases and a prominent member of the White House’s coronavirus task force, is satisfied. Fauci, who oversaw the US study on the effectiveness of the antiviral drug remdesivir, was visibly pleased when he told reporters that "the data shows that remdesivir has a clear-cut, significant, positive effect in diminishing the time to recovery" of Covid-19 patients. Following this conclusion, the New York Times reported that the White House had begun to consider allowing hospitals to administer the drug.

The study that put a smile on Fauci's face was conducted under the auspices of the National Institutes of Health (NIH) on 1,063 patients in the US, Europe and Asia. Beginning on February 21, for every patient who received a placebo, two patients received remdesivir, and preliminary analysis of the results showed that patients treated with Gilead's drug could expect to recover from Covid-19 four days sooner than those who were not. The fatality rate of the disease was also found to be slightly lower for those individuals who received remdesivir.

"Specifically, the median time to recovery was 11 days for patients treated with remdesivir compared with 15 days for those who received placebo," an NIH statement said.

“Although a 31 percent improvement doesn’t seem like a knockout 100 percent, it is a very important proof of concept because what it has proven is that a drug can block this virus,” Fauci said at the White House.

This may be the proof that the scientific community has been waiting for. Since the beginning of the Covid-19 outbreak, remdesivir has been considered one of the most promising treatment options while the world waits for a vaccine. What makes it particularly attractive is that it specifically targets the mechanism that allows pathogens such as coronaviruses to "replicate and amplify their viral load in the host body", said Isabelle Imbert, a specialist in antivirals at the University of Aix-Marseille. In addition, remdesivir attacks a process "specific to these viruses and which does not occur naturally in the human body, which makes it less harmful to the organism and improves its benefit-risk ratio", she adds.

Initially developed by Gilead to combat Ebola, the treatment has proven to be effective against the various coronaviruses that have emerged since the early 2000s. "It has produced very encouraging results in tests on animals exposed to SARS (Severe Acute Respiratory Syndrome, which occurred between 2002 and 2004) and MERS (Middle East Respiratory Syndrome, which appeared in 2012)," the French researcher recalled.

That a vast study seems to confirm the hopes placed in remdesivir has not escaped the notice of financial markets. The announcement of the US study’s results was enough to cause the stock market index to soar in New York, underlining the importance of this perceived scientific breakthrough in the eyes of investors.

However, perhaps investors should have paid more attention to what was happening in China. On the same day that Gilead and the NIH announced their findings, a team of Chinese researchers published much less encouraging conclusions in the highly respected British medical journal The Lancet. Their experiment, conducted on 237 severely ill patients in 10 hospitals in Hubei province (the region where the epidemic originated), seems to indicate that remdesivir makes little difference. "Unfortunately, our study shows that this treatment does not provide any specific benefit compared to a placebo," wrote Bin Cao, the main author of the article.

So back to square one? It’s difficult to decide, because "the two studies seem to be of equal quality", says Stephen Evans, a pharmacoepidemiology researcher in the department of medical statistics at the London School of Hygiene and Tropical Medicine.

Moreover, it seems difficult to compare the studies because information about some of their basic assumptions is lacking. "We don't know, for example, at what stage of the disease the remdesivir was administered in each case and whether there were combinations with other treatments, which could have had major impacts on the results," said Jonathan Stoye, a virologist at the Francis Crick Institute in London.

Furthermore, "the studies carried out on SARS in 2002 showed that the longer it took to use remdesivir, the less effective it was", recalls Étienne Decroly, virologist and director of research at the French National Centre for Scientific Research, speaking to FRANCE 24. In the Chinese experiment, the patients were all "in a serious condition", which could explain why its results are less promising, she says.

Still, the Chinese study has some advantages that may overshadow the US one. First, it is complete, while US trials are still under way. “It is generally known that provisional analyses tend to produce more positive results than final analyses," said Derek Hill, a medical imaging specialist at University College London. In addition, a full scientific publication of the NIH trial has yet to come, which makes it difficult to evaluate the study properly.

But the study conducted in Hubei province suffers from a major flaw: Only 237 patients were tested. “That's too few to draw definitive conclusions because the low number introduces considerable uncertainty as to the scope of the results," said Evans.

The researcher went even further, arguing that the difference in the number of patients in the two experiments may be the only reason why they did not reach the same conclusion. "The four days gained by the people treated with remdesivir in the US trial are within the margin of error due to the uncertainty of the Chinese experiment," he explained. In other words, the Chinese team might have seen a similarly fast rate of remission if they had also studied closer to 1,000 participants.

In the meantime, scientists are waiting for the results of other large-scale tests concerning remdesivir, such as one conducted by the France’s National Institute of Health and Medical Research that began on March 24 on some 1,000 people. In any case, in order for a treatment to be validated and marketed, "it usually requires two large clinical trials to demonstrate its efficacy", said Hill of University College.

For the moment, Evans said, one thing is certain. "Even if the evidence of its effectiveness is not yet complete, we can at least guess that remdesivir is the new standard against which other treatments currently in development will be compared."

This article is a translation of the original in French.