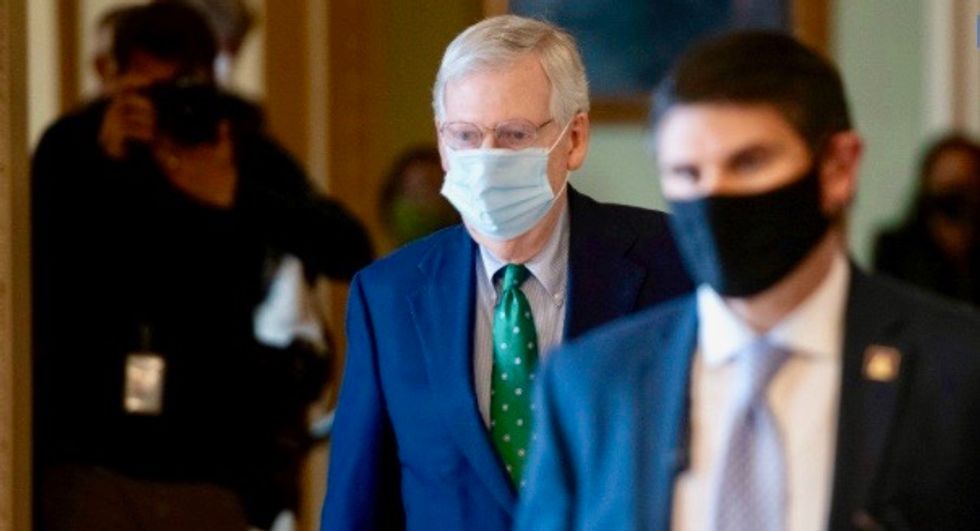 "Trump and McConnell are prioritizing their morally bankrupt agenda instead of addressing the impact of this public health crisis."

The organizations sent a letter to McConnell and Sen. Lindsey Graham (R-S.C.), chairman of the Senate Judiciary Committee, calling on them to maintain "a continued focus on support and resources to address the COVID-19 pandemic" instead of solidifying an ultra-conservative judicial branch while the country is focused on a public health and economic crisis.

"The United States is in the midst of the worst public health and economic crisis our nation has faced in at least 100 years. Covid-19 is wreaking havoc throughout society, laying siege to our lives, our health, our economic well-being, our schools, our justice system, our security, and our democracy," the letter reads. "Prioritizing judicial nominations as if there were no pandemic and ignoring the business that is most urgent for relief and recovery would be irresponsible. Therefore, the Senate Judiciary Committee, and the Senate as a whole, must take the necessary and commonsense action of putting the processing of judicial nominations on hold until the devastating impact of the pandemic has been diminished."

Signatories include the Leadership Conference on Civil and Human Rights, Indivisible, and Demand Justice.

The letter follows a statement from McConnell last month that "as soon as we get back in session" the Senate would begin confirming judges once back in session, starting with U.S. District Court Judge Justin Walker.

The Kentucky judge, a McConnell ally, was rated "not qualified" by the American Bar Association last year when President Donald Trump nominated him for his current seat. His confirmation hearing for a seat on the U.S. Court of Appeals for the D.C. Circuit is scheduled for Wednesday, and Democratic lawmakers have accused McConnell of endangering his colleagues and Capitol Hill workers by insisting on holding the proceedings during the pandemic.

"It is dangerous and irresponsible for the Senate to continue dedicating time to judges," Leadership Conference president Vanita Gupta tweeted. "Addressing Covid-19 must be the priority."

BREAKING: 40 groups, led by @civilrightsorg, are calling on the Senate to halt the consideration of lifetime judici… https://t.co/cRElLi528C
— Vanita Gupta (@Vanita Gupta) 1588607842.0

"The Senate must use its time to address the growing concerns of a nation confronting increasing death and illness, severely high unemployment, rampant food insecurity, insufficient access to healthcare, and long-term economic uncertainty," the letter reads. "The Senate cannot be so reckless and negligent as to prioritize judicial confirmations. Rather, the Senate must prioritize its efforts to mitigate the spread of the virus, reduce economic devastation, and deliver relief to the people who need it most."

Before returning to Washington Monday, the Republican leader said state governments that are struggling to provide medical equipment and economic relief should file for bankruptcy rather than request federal aid.

Last week, McConnell said any upcoming Covid-19 relief legislation should include legal immunity for corporations in case workers become sick with Covid-19 on the job.

"Trump and McConnell are prioritizing their morally bankrupt agenda instead of addressing the impact of this public health crisis," said Gupta in a statement. "Trump has carelessly botched the administration's response to this devastating pandemic, even as the economic security of millions hangs in the balance. Meanwhile, McConnell is moving in lock-step, continuing to push judicial nominees whose records demonstrate dangerous hostility to health care access. Their inability to meet the real needs of the people—especially vulnerable communities—is a disaster."